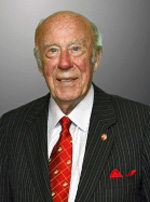 George P. Shultz is too often overlooked when analysts discuss the most significant American diplomats of the last half century.

Soft-spoken, methodical and steady, Shultz lacked the star quality of Secretaries of State Henry Kissinger and Colin Powell, the conspicuous deal-making acumen of his successor at State, James Baker, or the conceptual creativity of Zbigniew Brzezinski, a former national security adviser.

But Shultz’s career in government and diplomacy was extremely consequential, especially while he worked as President Ronald Reagan’s secretary of state to guide U.S. foreign policy through the final tumultuous years of the Cold War. And now, at the age of 90, Shultz continues to make contributions to public policy. He is an important leader in a growing movement that seeks the eventual abolition of nuclear weapons, and he has made constructive proposals to tackle America’s fiscal problems. He’s even written about how to make health care in California more affordable and, more recently, reflected on the WikiLeaks scandal.

During his stellar career — which included leadership positions in academia, business and government — Shultz held four cabinet-level postings. In addition to serving as Reagan’s secretary of state from 1982 to 1989, he served as secretary of labor, secretary of treasury and the White House budget director under President Richard Nixon. Shultz has taught at Stanford University, the Massachusetts Institute of Technology and the University of Chicago, where he was also dean of the university’s Graduate School of Business. Today, he is a senior fellow at the Hoover Institution at Stanford.

In his latest book, “Ideas and Action,” Shultz distills the lessons he learned during this remarkably productive and varied career. Not a full-scale memoir, the book is a kind of George Shultz sampler of what he dubs the “10 Commandments of Negotiation” — with personal reflections on his work, his views on negotiating tactics, the perils of nuclear weapons, and the leadership skills of Ronald Reagan. It also includes plenty of photos and several short essays by others about Shultz. 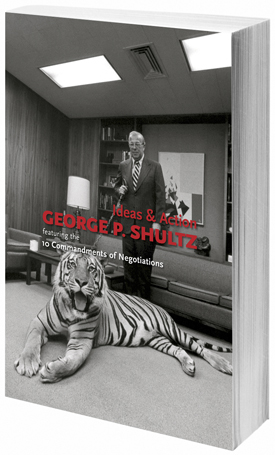 Shultz’s central thesis is the importance of blending ideas and action into his professional life. “We have grown accustomed to drawing a bright divide between the world of ideas, a world dominated by ivory towers, and the world of action, a world dominated by oval offices, market floors and fields of battle. My life and career, however, have known no such bright dividing line,” he writes.

Describing his moves from university to government to business and back into government, Shultz says this “mixed-up career” has given him valuable insights. “I have benefitted enormously from having had the chance to move back and forth from a life of ideas to a life of action, from a world of reflection to a world of high-level decision making,” he said.

Shultz writes wryly about the different worlds he has inhabited and the lessons he has drawn from each. “When I went into business, I quickly learned that you need to be careful when you tell someone working for you to do something because the chances are high that he or she will do it. In government, you don’t have to worry about it, and in the university, you are not supposed to tell anybody to do anything in the first place,” he quips.

He makes a strong case for the value of sheer persistence, especially when working in government, arguing that “certain problems just have to be worked at — must be worked at — if a situation is to be prevented from deteriorating.” Shultz adds that in the U.S. government, few decisions are ever final. Those on the losing side of a policy debate often begin to work immediately to reverse the decision.

Shultz’s reflections on negotiating are compelling. His “10 commandants” showcase his vast experience, practicality and wisdom, deriving lessons from labor mediations and university administration that were useful in his later diplomatic work.

The first commandment of negotiating, according to Shultz, is to be in control of your constituency. By this he means that a negotiator must fully understand the needs and goals of those he represents in the negotiation.

As an example, Shultz recalled that as he prepared to lead the U.S. delegation in arms control talks with the Soviet Union in 1985, he purposely assembled a large team with representatives from all agencies in the U.S. government interested in the talks. This was cumbersome but helped him to fully understand the perspectives of all the key players, keep them informed about the substance of the talks, and secure their full support when an agreement was reached. He noted that a group of senators were official observers to the negotiations. This was critical because arms control agreements require Senate approval and senators made it clear that if Shultz wanted their support when the treaty was ultimately voted on, they wanted to be brought in at the start of the talks.

Shultz says it’s also essential to understand the needs of the other side and to develop strong personal relationships with your counterparts. But he argues convincingly that it’s possible to put too much weight on personal compatibility — overlooking the fact that ultimately all parties are negotiating on the basis of their perceived interests, not whether they like their interlocutors.

To that end, Shultz believes negotiators should always try to ascertain what is most important to their counterparts. And while negotiations should be viewed as an ongoing process, it’s vital that negotiators not become too intent on preserving their relationships with their counterparts. Shultz recalled that when he joined the Reagan administration in 1982, the U.S.-China relationship was strained. Reflecting on the impasse and drawing from academic studies showing that negotiating parties sometimes come to value their relationship too much, he directed American diplomats to shift their focus to substantive issues and pay less attention to just tending to the relationship. This led to progress in several areas.

Shultz writes that negotiators must be seen as credible, operate truthfully and set realistic goals. Timing is especially critical, he adds, and negotiators must assess if the situation is ripe for an agreement.

The former secretary of state also argues that strength and diplomacy go hand in hand. A strong, confident nation has significant diplomatic leverage, he says, while emphasizing the need for governments to stay engaged with other nations even when they disagree with them.

“The test of successful diplomacy is whether objectives are accomplished. While diplomacy without pressure is idle talk, refusing to talk is no substitute for the pressure essential to elicit change,” he writes.

Throughout the book, Shultz offers frequent and fulsome praise for Reagan, describing the former president as principled and practical, courageous and trustworthy, forceful but restrained. He tells the story of Reagan honoring his pledge to West German Chancellor Helmut Kohl to attend a ceremony at the Bitburg cemetery despite fierce public criticism when Americans learned the cemetery included the remains of SS troops. Reagan hoped Kohl would move the event to a different venue but when Kohl refused, Reagan still attended the ceremony. He had given his word to Kohl and felt it would be wrong to back out.

Shultz also recounts the story of Reagan’s confrontation with air traffic controllers over a threatened strike early in his presidency. While some advisors urged him to consider a compromise, Reagan said only one fact was pertinent: The air traffic controllers were striking illegally. Whether one agrees with his stance on the strike, few can disagree that the episode was critical in establishing Reagan’s reputation as a tough and formidable president.

Shultz himself remained a major public policy figure long after Reagan’s term. In the book, he briefly describes his current work advocating for a world without nuclear weapons — a project that began with a conference Shultz hosted at the Hoover Institution in 2006 to celebrate the 20th anniversary of the Reykjavik summit between Reagan and Soviet leader Mikhail Gorbachev. The Hoover conference delved into the history of the 1986 summit but also considered the current nuclear situation.

Shultz continued to study the issue and then joined Kissinger, former Secretary of Defense William Perry and former Senate Armed Services Committee Chairman Sam Nunn in writing a landmark essay in the Wall Street Journal in January 2007. “A World Free of Nuclear Weapons” argued that the United States should endorse a long-term vision of eliminating nuclear weapons while supporting a number of specific, short-term steps to advance that goal. It captured the attention of global leaders and may go down as one of the most important op-eds in recent history.

“The impact around the world has been dramatic,” Shultz wrote, noting that the Hoover conference and the Wall Street Journal essay led to the convening of important conferences on the challenge of nuclear abolition. Both Barack Obama and John McCain endorsed the vision of world without nuclear weapons during the 2008 U.S. presidential campaign, and the U.N. Security Council passed a resolution in September 2009 supporting the idea. “Progress has been breathtaking, but the most difficult work lies ahead,” Shultz writes. “We are at a nuclear tipping point and we must succeed in turning the vision of world without nuclear weapons into a reality.”

Near the end of the book, Shultz questions if a multilayered career such as his is possible in the current polarized political environment, in which both parties use the Senate confirmation process to settle scores.

“I can’t help but wonder if even the government part of it could be duplicated these days, let alone the movement back and forth from university to government, then business, then back to government, and now back to a life based on the university but mixed with business and government involvement,” he muses.

“Ideas and Action” is an enjoyable and instructive book that presents valuable insights in an easy-to-digest format. However, I would have liked a fuller discussion of Shultz’s work on the nuclear issue. The decision by four of America’s coldest Cold War warriors to support a nuclear-free world was a seminal event and has given the anti-nuclear movement a huge boost. Shultz could have more fully discussed the evolution of his thinking in this arena, just as he could have better examined the linkage between U.S. foreign policy and America’s domestic economic challenges. After all, few statesmen have been more steeped in economic issues than Shultz has, and his insights on the connection between international strength and a vibrant domestic economy would have been important to consider, especially given today’s fiscal constraints.

Those who are interested in a more detailed account of Shultz’s career should read his memoir, “Turmoil and Triumph: My Years As Secretary of State,” which was published in 1993. And those interested in his current thoughts on America’s domestic challenges should read “Putting Our House in Order: A Guide to Social Security and Health Care Reform,” written with John Shoven in 2008.

“Ideas and Action” gives the reader an appreciation for the fluidity of the U.S. political and governmental system, in which a person with Shultz’s rich, multifaceted background could reach the pinnacle of American diplomacy. We can only hope that more public servants of George Shultz’s caliber are on the horizon, both in the United States and around the world.