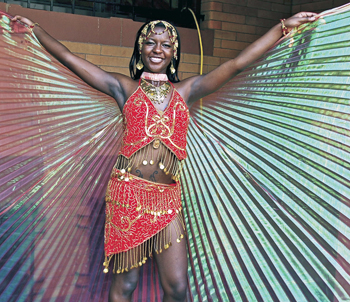 Fuel surcharges, baggage fees and those pesky security pat downs make traveling quite a trek these days. Even ambassadors apparently aren’t exempt from the occasional hassle: Last December, Indian Ambassador Meera Shankar was subjected to a pat down at a Mississippi airport, causing a minor diplomatic ruckus.

Cultural Tourism DC also creates quite a stir — but the positive kind — with its annual around-the-world tour in Washington that makes different nations as accessible as taking a few steps or riding a bike.

As part of Passport DC, dozens of embassies from Australia, above, to Saudi Arabia open their doors to the public each year and offer a taste of their national culture.

The organization is back this month with the fourth installment of Passport DC, its citywide cultural showcase that includes the popular embassy open houses on May 7 and 14, with at least 35 embassies participating. The diverse list spans the globe, from Bahrain, Botswana, Ecuador and European Union member states, to Haiti, Mexico, Micronesia, Ukraine and Uzbekistan.

At the embassies, which will open their doors to thousands of visitors from 10 a.m. to 4 p.m., guests will be treated to a taste of the countries’ culture, literally. Many offer customary foods and drinks in addition to artistic presentations. For example, the Embassy of Egypt, a first-time participant in Passport DC, will serve coffee, tea and basbousa, a traditional dessert of syrup-drizzled sweet cake.

Given the governmental upheaval the country has faced in recent months, Mohamed Saleh, cultural attaché for the embassy’s Egyptian Cultural and Educational Bureau, hopes visitors will leave with a new understanding of Egypt. “I hope they will get more exposure to the Egyptian culture, like how beautiful the country is,” he told The Washington Diplomat. “Hopefully there will be some discussion about the new frontier for Egypt and how things are moving back home as well.”

To that end, the embassy will show two films about Egypt’s culture and history, and it plans to include a discussion panel, Saleh said.

Another first-timer, the Embassy of Bolivia, will feature dances and dishes from every region of the country, such as potato-inspired plates from the Andes, banana-based foods from the lowlands and fruits from the east, in addition to some twists on traditional tastes using quinoa.

“We want to promote our culture a lot more and our artists and our craftspeople,” said Luis Alipaz, first secretary at the embassy. “We hope that people discover a new Bolivia.”

Other embassies are experienced Passport DC participants. The Embassy of Brazil, which joined the event last year, will expand its involvement this year by adding music and Capoeira — part self-defense, part dance — demonstrations to its tour of the ambassador’s residence. Embassy officials say they expect 4,000 guests.

Besides the open houses (one for EU countries on May 7 and the Around the World Embassy Tour on May 14), Passport DC encompasses festivals such as the National Asian Heritage Festival’s Fiesta Asia Street Fair, which attracts 10,000 people, as well as the Meridian International Children’s Festival, which aims to introduce kids ages 9 and younger to new cultures. Both will take place May 21. 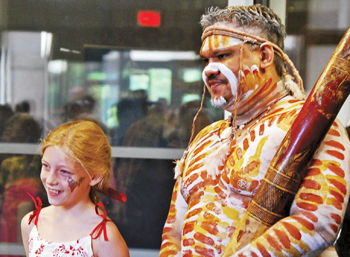 As part of Passport DC, dozens of embassies from Australia, above, to Saudi Arabia open their doors to the public each year and offer a taste of their national culture.

Joining those Passport lineup veterans will be the Kids World Cinema Festival, which is hosted by the Alliance Française de Washington with help from various embassies and local venues such as Hillwood Museum and Goethe-Institut. Although Alliance Française has presented the film festival since 2009, this is the first time it has teamed with Passport DC.

The films highlight 10 countries — the United States, Québec, Brazil, Britain, France, Germany, Spain, Australia, Japan and Senegal — and will consist of five 90-minute screenings, with at least one movie from each country, shown over five days: May 13, 14, 20, 21 and 22. All the movies have English subtitles and are followed with an arts-and-crafts workshop, such as origami after the Japanese films, and discussions addressing the films’ cultural contexts. The appropriate viewing age depends on the movies, but the overall range is 5 to 13 years.

Passport DC originated from the European Union Embassies’ Open House, which was first held in 2007 and then absorbed into Passport DC when it started in 2008. In its first two years, Passport DC was staged during the first part of May with three events that attracted 28 embassies and 11,000 people. Last year, it expanded to nearly the entire month of May and brought onboard Fiesta Asia and more than 100 smaller international events at venues throughout the city. Thirty-four embassies participated, and attendance almost doubled to 20,000 (also see “Jam-Packed Passport: Itinerary Expands for This Year’s Citywide International Showcase” in the May 2010 issue of The Washington Diplomat). Most Passport DC events are free, although some require a small admission fee.

The success of the unique endeavor is both surprising and expected, according to Cultural Tourism DC Executive Director Linda Donavan Harper. “There’s nothing else like it [in the world],” Harper said. “We knew that there was certainly interest. In talking to people anecdotally we know that people think of the embassies as sort of the most mystical and magical thing in the city. You drive down [Massachusetts Avenue] and it’s, ‘What flag is that?’ and ‘Gee, I wish I could get in that door.'”

So her organization, whose mission is to promote D.C. culture beyond the sights of the National Mall, saw an opportunity to merge local interest and embassies’ desire to share their culture in this new age of public diplomacy and soft power.

“I think there’s a real interest in that one-on-one diplomacy,” Harper said. “The world is so small now. Technology really allows one to think about how we have that opportunity to shake an ambassador’s hand or to see where he sits and works or to taste the food from another country. And that’s pretty special.”

Passport DC runs in May throughout Washington, D.C. For more information, please call (202) 661-7581 or visit www.PassportDC.org

Stephanie Kanowitz is a contributing writer to The Washington Diplomat.