Home The Washington Diplomat May 2011 On Third Posting, D.C. Like Second Home for Turkish Couple 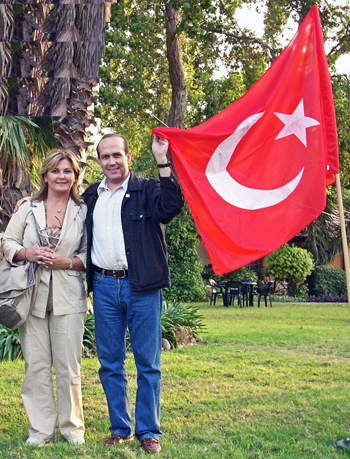 She is positive that she’s boring, but honey (one of her favorite expressions), she’s anything but. In fact, Fügen Tan, wife of Turkish Ambassador Namik Tan, is full of life, exuding a surprising openness and effervescent spirit that is downright infectious.

“Honey, I’m very lucky. I live in America in a residence that is like a castle, a dream house,” she beamed of her diplomatic home with refreshingly undiplomatic frankness.

“I’ve changed a few things to make it feel more like home,” Fügen explained as we settled into the comfy area she created in the grand second-floor salon of the official Turkish Residence overlooking Sheridan Circle. “It was too royal, too formal for us and too dark. I must have light! Of course, we don’t live here on this floor. We really live upstairs. We spend all our time in the sunroom up there.”

Pointing out the priceless blue and gold Sevres vases, Turkish silver and other precious valuables that have been collected over the years, she admitted the stately surroundings can be intimidating.

“I’m so afraid something important will get knocked over and broken, especially when there are a lot of people here. I’m always watching. These things are too precious, too antique and so valuable. It’s not easy to live in a house that’s like a museum.”

The candor of this friendly and forthright diplomatic wife both disarms and charms the people she meets. And she is as open about her personal life as she is about her diplomatic life.

“I was only 17 when I met my husband. A friend introduced us and that was it! I never dated anyone else. He is the only man I have ever known, honey. As much as I love our children, my husband is very important and always comes first,” she told us.

“My husband is my best friend. I think he is very nice, elegant, friendly, charming and very handsome. He still has that ‘baby face’ I fell in love with,” she said, stopping to laugh. “And I still love him too much!”

Yet sitting in the opulent residence as the wife of Turkey’s ambassador in what many rank as the world’s top diplomatic posting, she also remembers how tough their diplomatic life together was in the beginning.

“Our first post was Moscow. I was only 24 and my husband 26. Our daughter Asli was two and a half then and I didn’t speak Russian. That first year was so very difficult; it was too cold,” she recalled.

“The second year there I started learning Russian from our housekeeper. I couldn’t write or read in Russian but I spoke with her all day. It became a joke that my husband — who had Russian lessons twice a week — could read and write the language perfectly, but he couldn’t speak it at all. And I, with my informal lessons at home, couldn’t read or write a word but could speak Russian. He was always asking me, ‘How do you say this or that and I knew the answer.

“I went out shopping and found my way around Moscow from our little apartment,” she continued. “I was impressed how clean their metro was, how each station was elaborately decorated with different designs in bronze or marble, like a museum. I loved finding antique shops where I could buy fine china like Herend and Meissen at very low prices. It was so cheap then. Now I wish I had bought more.”

Living in Moscow, she also learned “how educated and cultured Russians are. They like to read and not only know their country’s culture but they knew Turkey’s too.”

Just as she was beginning to get used to Moscow though, the nuclear disaster at Chernobyl in neighboring Ukraine upended their quiet posting.

“Even though we were far away in Moscow, everyone naturally became concerned. Since I was pregnant then with Aras, I was extra careful about what I ate and drank. Other diplomatic families brought me special treats from their home countries and one American diplomat ordered special vitamins especially for me. Everyone was so kind.

“I went home to Turkey to have the baby and when I came back, we were reassigned to go directly to Abu Dhabi — from too cold to too hot. These were such challenging posts, especially when we were so young and just starting out. We arrived in the UAE with a four-and-a-half-year-old and a one-year-old baby. It was not easy.”

She added: “In both places, everything was so different from Turkey. I had so much to learn. And as a young Turkish diplomatic couple, we had to be careful with our expenses, too. My family back in Turkey didn’t want to come visit us in Moscow or Abu Dhabi; they wanted us to come home instead.

“So, I went home often. We had a good time. My family helped me, so did my family’s housekeeper, and as a young mother with two little children, my life was so much easier with that built-in family support system.”

After nearly five years abroad in Moscow and Abu Dhabi, the Tans returned to Turkey for two years before their initial posting to Washington, two decades before returning to take on the ambassadorship.

“The first time we lived here from 1991 to 1995, my husband was first secretary at the embassy. Then the ambassador was Nüzhet Kandemir. We lived in Vienna [Va.] on Cedar Lane. We were able to live in a big suburban house because the landlord liked us so much that he gave us a very special rate. We loved those four years here.”

Two years later, they would be back.

“The second time, from 1997 to 2001, my husband was first counselor working again with Ambassador Kandemir who was still here. Then Ambassador Baki Ilkin came. That time, we lived in McLean.”

Now this third time, her husband is the ambassador, after having served as spokesman for the Ministry of Foreign Affairs, ambassador to Israel and deputy undersecretary of bilateral political affairs and public diplomacy (also see Ambassador Tan’s cover profile, “Turkey Emerges,” in the January 2011 issue of The Washington Diplomat).

Today, unlike their previous postings, their two children are grown and living on their own in Istanbul. Asli, 29, is looking for her next career move after working for two international companies. After graduating second in her class from McLean High School in Virginia, she and her brother Aras returned with their parents to Turkey, where she attended Bilkent University in Ankara while Aras went to Turkish public high school.

Asli though missed her American friends, so she transferred to the George Washington University in her junior year, living with family friends and graduating with a GWU degree.

Aras, now 25, works for a well-known Turkish company that takes its name from the ancient city of Ephesus. He too dreamed of being an American college student, living in the dorms and enjoying campus life, so also returned to the Washington area to study at Virginia’s George Mason University.

“This time they didn’t want to come with us,” Fügen said, noting that today, “they are independent and their lives are in Turkey.”

“Our children are very different from each other,” their mother observed. “At McLean High, Asli came home one day and told me that she was a ‘nerd’ and said, ‘I should be smart because it is not easy to live in another country. You have to have extra talent to succeed away from home and I want to be a success.’ She was so smart and studied hard. She didn’t worry about being popular.

“Our son was the opposite. He wanted to be just like American kids. He spoke their teenage slang that none of us understood and wore his pants down low…. He had little interest in anything that wasn’t American,” Fügen recalled.

“Now, they love Turkey,” she said. “By going to Turkish public schools, they learned about our culture when they were young … and now live happily in Turkey. We are especially glad that they have so much love for Turkey because we do. Sometimes if you move often to a different country, as diplomatic families do, the children don’t feel like any country is their ‘home.'”

For her part, Fügen is delighted to be back here.

“Washington is like our second home,” she said with a big smile. “Honey, I know where everything is and I know how to drive there. I still go to my old hairdresser in Virginia and love driving to see all my Turkish and American friends.”

She’s also quick to tell me her favorite local haunts.

“Rio Grande!” she exclaimed, immediately naming her favorite restaurant, part of the popular Uncle Julio’s brand of Mexican eateries. “I love going to the one in Reston and I still like shopping at Tysons Corner. I’m used to going there, even though so much has changed.”

And all three times in Washington, she has found Americans incredibly welcoming.

“People are so friendly here — much more open, very positive and so willing to help others,” Fügen said, although she lamented that many Americans don’t know more about her country.

“Turkey is a fascinating country which has a rich history and culture. My country is not only a bridge between Europe and Asia, but also it is cradle of many ancient civilizations and cultures,” she said. “It is a tourist destination that Americans must see at some point their lives.”

She added: “Sometimes people do not understand the true nature of Turkey and the Turks … and we are viewed through the prism of symbols and stereotypes. Turkey is a country that is solidly anchored in West, a predominantly Muslim yet secular country with a multiparty democracy and free market economy in one of the most volatile neighborhoods in the world.”

And in her opinion, the Turkish Embassy’s highly touted new Ertegün Jazz Series is the perfect vehicle to showcase Turkey’s “legendary tolerance.”

Organized by her husband with help from the group Jazz at Lincoln Center and Boeing Co., the series of jazz concerts honors the memory of Ahmet Ertegün, the founder and chairman of Atlantic Records, a Turkish descendant and one-time D.C. resident. When they were young, Ahmet and his brother Nesuhi — along with their father, Munir Ertegün, Turkey’s ambassador in Washington from 1934 to 1944 — held the first racially integrated jazz concerts in then-segregated Washington that became, according to jazz journalist Bill Gottleib, the city’s “most famous private jam sessions.”

To mark their revival, the Tans invited leading members of the Congressional Black Caucus to the inaugural concert on March 1, which also coincided with Black History Month.

“Honey, it could be that this series, especially if it continues after we’ve left, could become my husband’s ‘signature’ here,” Fügen proudly pointed out.

“Ambassador Ertegün and his sons were the first to welcome Washington’s Afro-American musicians and fans to an integrated jazz session at the Turkish Embassy during segregation,” she said. “Now with this series, we are once again opening this same residence to again introduce Washington’s jazz lovers to the young, up-and-coming musicians who are in the early stages of their promising careers. For Turkey, which now has its own international jazz festivals each year, this cultural outreach is a natural gesture of friendship and respect.”