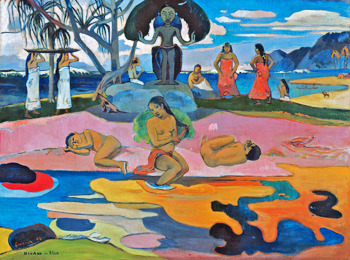 Paul Gauguin traveled the Pacific to find primitive purity, although when he found the footprints of Western culture, he simply recreated his dream of unspoiled worlds in works such as “Mahana no Atua (Day of God).”

Paul Gauguin clearly still has the power to inspire — and apparently enrage. Last month a woman pummeled one of the artist’s paintings at the National Gallery of Art of two nude Tahitian women, screaming that the $80 million work was “evil.” The woman, who remains in custody, reportedly had a history of schizophrenia.

Gauguin — the self-taught French post-impressionist master who abandoned a business career to travel the world in search of artistic fulfillment and primitive beauty — grappled with his own emotional demons, including bouts of depression and illness in his final years living on the islands of the South Seas.

It’s safe to say though that he dealt with his demons and his own preoccupation with evil in a somewhat more constructive way. And today, far from “evil,” his naked Polynesian women, devil masks and palm trees have become internationally iconic images — and a window into the mind of a tortured man trying to rekindle a vanishing culture.

And technically speaking, not only did Gauguin pioneer modern art forms with his use of symbols, bold coloring, primitivism and other styles, he interwove ritual, myths, meaning — and a bit of angst — into works that clearly retain their emotional potency today.

That’s the theme of a major show at the National Gallery of Art that was somewhat overshadowed by the strange attack in April. But the exhibition “Gauguin: Maker of Myth” is the real headline-making event.

Nearly 120 sumptuous works are on display in the first major examination of the artist’s oeuvre in the United States since “The Art of Paul Gauguin,” the previous blockbuster retrospective at the National Gallery in the late 1980s.

Co-organized by the Tate Modern in London, this show features self-portraits, genre pictures, still lifes, landscapes and sculpture, spanning the great, rambling, drifting journey of Gauguin’s life — from his beginnings as a middle-class stockbroker, complete with wife and children, to hop-scotching faraway islands in search of mysteries and often mistresses. It was a pursuit, both personal and artistic, for spiritual authenticity, for cultural purity before it could be tainted by the touch of Westerners — like Gauguin himself, it might be noted.

That pursuit for purity led Gauguin from the comforts Paris to an artist’s colony in rural Brittany, all the way to Peru, Martinique, Panama and finally to the islands of French Polynesia, where he sought an escape from European “civilization” altogether. Here he found a different but disappearing civilization, immersing himself in Maori culture while pondering questions of life, death and beyond. And here we see the man himself lurking in his various disguises, not only as painter, ceramist, wood-cut engraver and printmaker, but also as a storyteller — infusing religious and mythological symbols drawn from both European and Maori legends to tell visual narratives that are raw in their simplicity and powerful in their intimacy. 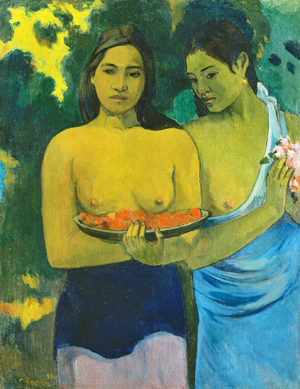 Photo: The Metropolitan Museum of Art

Unlike the 1980s retrospective, this exhibition comes at you in sections that thematically chronicle the artist’s search for himself through his art. Every step of the way Gauguin produced astonishing, unforgettable work that could have been achieved by no one else. Every step of the way he also seemed to indulge his appetite for the exotic.

“Maker of Myth” veers like the man himself, starting with Gauguin’s self-portraits before sections examining his “Quest for Spirituality,” which documents the emergence of religious themes in his work; “Earthly Paradise/Paradise Lost,” depicting his first foray into Tahiti; “Re-creating the Past” and the lost Polynesian culture that he never quite found; “Archetypal Females” as he sought the eternal mythical woman; and “Religious Commonalities,” in which Gauguin unearths connections among different faiths.

Gauguin’s reputation as something of a modernist painter is unsurpassed because, although he’s tends to be lumped in with all the impressionists mostly because of time and proximity, his work hardly resembles any of theirs. He arrived at his distinctive style honestly, by way of experience hotly pursued, with both wild abandonment and artistic purpose. Gauguin’s art, more than most of his contemporaries, is about him, his burning, hungry soul.

His personal reputation, however, is a bit less high-minded — and much more lurid, self-indulgent, wild and maniacal, if not entirely mad. Of course, Gauguin rationalized his shameless behavior with a poetic articulateness that was difficult to resist. As he’s reported to have said upon leaving for the South Seas: “There in Tahiti, in the silence of beautiful tropical night, I shall be able to listen to the sweet murmuring music of my heart’s movements in loving harmony with the beings around me. Free at last with no money troubles and able to love, sing, and die.” Even a wife would shed a tear listening to this beautiful drivel, just long enough to allow him to escape.

He hoped that escape would yield a natural, unspoiled Nirvana, whether in coastal France, imbued with its ancient Celtic flavors, or the unexplored tropics. But he never quite found Nirvana. Rather, in Tahiti, he was confronted with the trappings of Western missionaries and colonial rule. So he resurrected the native Polynesian women and gods he’d always envisioned in his canvases, woodcarvings and writings.

The Pacific may have never quite lived up to his dream, but Gauguin’s recreation of his dream continues to haunt us today.

With Gauguin, it’s always a slippery slope. Genius of his kind, with such a purpose, is Promethean. But we know what happened to Prometheus — the Greek champion of mankind, known for his wily intelligence, who stole fire from Zeus, gave it to mortals, and was then punished by having an eagle eat away at his regenerating liver every day. Gauguin too yearned for the most primitive fire, and it’s quite possible he found it and passed it on, still hot to the touch, biting to the eye, and wounding to the heart.

located on the National Mall between 3rd and 9th Streets at Constitution Avenue, NW