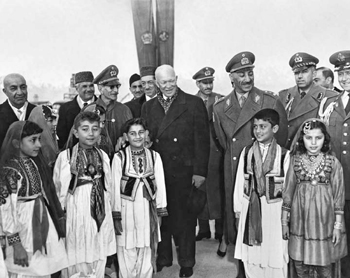 The Meridian International Center dug up archival photographs documenting the early years of U.S.-Afghan relations, uncovering a picture of cooperation with scenes such as Dwight D. Eisenhower’s trip to Afghanistan, the first ever by an American president.

In April, a small-town Florida pastor who has about 30 followers but clearly craves the international limelight finally made good on his longstanding threat to publicly burn the Koran, denouncing it as “evil.” Furious Afghans protested, and a mob stormed a United Nations office in Mazar-i-Sharif and brutally murdered seven workers they called puppets of a disrespectful America (though none were American).

That gun-toting pastor, Terry Jones, a former used furniture salesman, got the attention he so craved and that U.S. government officials had so sought to downplay — generating the latest negative headline about the tumultuous U.S.-Afghanistan relationship.

Even before the war today that continues to both test and shape that relationship, America’s ties with Afghanistan were controversial, with the U.S. government funding Mujahideen fighters as a bulwark against the Soviets in the late 1970s, not knowing the fighters would eventually morph into the Taliban.

But America’s relations with Afghanistan were formed long before these conflicts, and a new Meridian International Center exhibit tries to put that relationship into perspective.

Co-sponsored by the State Department, “In Small Things Remembered: The Early Years of U.S.-Afghan Relations” features more than 80 reproductions of archival photographs and documents that depict a range of Americans and Afghans working together from 1911 through the 1970s. The pictures reveal an untold story — one of cooperation and mutual respect that rarely makes the front pages.

One image from 1911 features A.C. Jewett, a former General Electric engineer who traveled to Kabul to construct Afghanistan’s first hydroelectric plant. Jewett spent eight years in the country working as chief engineer for Emir Habibullah Khan. In the photo, he stands besides an Afghan sitting atop an elephant as the duo pushes a boulder at a construction site.

Another photo from 1946 captures a group of young Afghan boys in baseball uniforms. American J. Robert Fluker had introduced baseball while teaching at Habibia College in Afghanistan. Fluker taught the game, Americans donated the uniforms, and Time magazine reported that bagpipers “tootled” music while girls “whooped and whirled” on the sidelines during the country’s first taste of America’s favorite pastime.

On hand for the recent exhibition opening in Washington were newly appointed Afghan Ambassador Eklil Hakimi, Marc Grossman, the special envoy to Afghanistan and Pakistan, and Earl Anthony Wayne, deputy ambassador at the U.S. Embassy in Kabul, which initially proposed creating the unprecedented collection of photographs.

Grossman said the pictures show that the U.S. relationship with Afghanistan didn’t start on Sept. 11, 2001 — contrary to popular belief. Instead, they portray an extensive and cooperative history not defined by “the burning of a book and killing people,” the envoy said, but by the students, diplomats, engineers, agricultural experts, Peace Corps volunteers, presidents and others who worked together to build a nation.

“This relationship is based on individuals and people keeping their word to one another and lending a helping hand. This is the power of the individual.” Grossman said.

Organizers broke the exhibit into five sections chronicling the evolution of bilateral relations. The first, “Early Contacts,” took place between 1911 and 1948 before the two nations exchanged ambassadors. In one 1921 photo, Afghan Princess Fatima Begum stands out amid a group of suited-up men on Capitol Hill. Her fashion caught the eye of the American press corps, according to Library of Congress records. The princess wore a dress cut off at the knees and black nylons, a sheer headscarf loosely adorned her hair, and a 45-carat-dimond necklace draped around her neck.

In the “Official Visits” section documenting diplomatic exchanges between the two countries, we see a series of photographs from 1959 that capture President Dwight D. Eisenhower’s trip to Afghanistan — the first ever by an American president. One shows his motorcade winding among hundreds of Afghans cheering in the streets, tossing confetti and waving American flags. Later presidents also featured include John F. Kennedy, Richard Nixon and Lyndon B. Johnson. 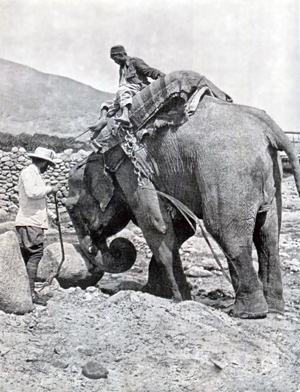 In this image from 1911, A.C. Jewett, a former General Electric engineer, left, stands beside an elephant at a construction site in Kabul, where he spent eight years helping to build Afghanistan’s first hydroelectric plant.

“Education and Outreach” highlights the U.S. aid programs that operated between the 1950s to the late 1970s, including images of Peace Corps volunteers teaching Afghan children music or women medicine at nursing schools.

In one 1953 photo, an Afghan man in a turban and traditional robe stands reading an American cookbook in a magazine section that includes publications such as National Geographic and Woman’s Day, providing a striking contrast with the bearded Afghan man.

“Cultural Diplomacy” traces the artistic exchanges that took place long before the notion of public diplomacy become popularized today — as jazz legends such as Duke Ellington and groups such as the Joffrey Ballet exposed Afghan audiences to U.S. culture. One Life magazine photo from 1963 shows 12 Joffrey Ballet members posing with their right feet crossed over their left and hands over their chests, as snowy mountains rise in the background. Robert Joffrey, who was born Abdullah Jaffa Anver Bey Khan, the son of an Afghan who had immigrated to the United States, launched his “Dreams of Glory” tour in Afghanistan to honor the country of his father’s birth. More than 500 Afghans showed up to take his dance class.

The last swath of photographs illustrate Americans and Afghans collaborating on dam- and highway-building projects, all of which came to a screeching halt during the Soviet invasion.

But the memory of that cooperation now endures. Curtis Sandberg, vice president for arts and cultural programs at the Meridian, oversaw the research team that organized the exhibit in a yearlong process that involved digging through old newspaper and magazine clippings, Library of Congress archives, and university and private collections to unearth the forgotten photos.

“It was like going to college again,” Sandberg said.

The Meridian hopes to develop a two-year U.S. tour of the exhibit, after which it would travel to Kabul. Meridian President Stuart Holliday said the show is emblematic of the center’s mission to build cultural bridges.

“This exhibition demonstrates that security is merely one of the many threads that weave our shared history,” he said. “I am certain that Americans and Afghans who see this exhibit will better understand the history of our relationship and will forge new ties that build upon foundations laid during the 20th century. I hope that in the future new images will be added, chronicling the continuing friendship between our nations and our people in the 21st century and beyond.”

In Small Things Remembered: The Early Years of U.S.-Afghan Relations