Home The Washington Diplomat May 2011 Taste is Subjective, and Explosive, Among Three Friends 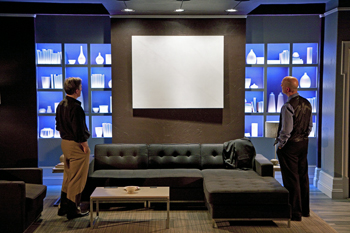 Just about anyone who has spent time in modern art galleries can appreciate the conflict at the heart of Yasmina Reza’s play “Art” now on stage at Signature Theatre.

At the outset of this briskly paced and furiously funny play, Serge purchases a canvas painted white for $200,000 fully convinced that it is not only a transcendent piece of artistic creativity, but also an irrefutable commentary on his own sophistication. His friends Yvan and Marc aren’t so sure. In fact, Marc declares this piece of “art” a euphemism for excrement.

From left, John Lescault (as Serge) and Mitchell Hébert (as Marc) gaze at a white canvas that Serge bought for $200,000 in Yasmina Reza’s “Art.”

Of course, when it comes to art, taste is subjective. What one might deem trash another may view as a treasure. Yvan, who can’t quite seem to make up his mind about the painting, vacillates between placating Serge and commiserating with Marc. On the one hand, Yvan finds it ridiculously priced. But on the other, he strains — with some self-professed success — to see its simplistic beauty. By prevaricating, Yvan unintentionally exacerbates long-simmering resentments among all three of the men.

For the next 80 minutes or so, audience members are treated to “Art,” a well-acted, crisply directed, one-act dark comedy that examines the nuances of taste and tact, as well as the emotional threads — thick and thin — binding the fabric of lifelong friendships. Matthew Gardiner’s direction is assured, and the scenic design by James Kronzer captures a contemporary feel while remaining muted enough not to be distracting.

Signature has a deserved reputation for solid acting, but this small, three-actor cast is exceptional for its dramatic range, rapid-fire delivery and sheer believability. The men each bring different conceits and neuroses to the table, making for consistently compelling emotional exchanges.

Reza, a female playwright of French descent, eloquently mines the familiar contempt often harbored just below the surface of long-time male friendships. The characters in “Art” plumb the depths of each others’ insecurities with deft skill and bracing honesty. Their attacks and retreats remind us of the fragility of friendships and how even the smallest misunderstanding can morph into something much more serious. It is doubly impressive that Reza’s dialogue in “Art” — filled with such personal vindictiveness — can elicit howls of knowing laughter from an audience.

As the play progresses, the men work through their differences of opinion over the art, the women in their lives and what they each mean to each other. It’s not always pretty but it is often funny.

John Lescault as Serge is thoroughly convincing as an erudite, yet simultaneously down-to-earth (if slightly insecure) art patron and dermatologist, while his cast mates are equally compelling. Marc (Mitchell Hebert), the smug, razor-tongued aeronautical engineer gives the play punch, while Yvan (Michael Russotto), a sensitive stationery salesman, gives it heart.

Hebert, portraying the least formidable character of the three actors, manages to nearly steal the show. His five-minute monologue detailing all of the tribulations associated with his impending wedding — complete with staccato bursts mimicking his fiancée’s family members — melds a marvelous combination of dramatic acting and comedic timing. Hebert also makes great use of a particularly expressive face and mannerisms that sell his scenes and make the viewer want to root for him.

Serge, meanwhile, is generally comfortable in his own skin and obviously a success, but he longs for the elder Marc’s endorsement of his art purchase. Marc is not nearly so generous. In fact, he tells Yvan that the purchase fills him with “”some indefinable unease.” Later, he pronounces himself “offended” that a friend of his would make what he views to be such an irrational and ill-conceived expenditure.

Serge, by contrast, defensively exclaims that he doesn’t care if Marc likes the painting but is insulted by his condescension. In one of the more compelling exchanges, he berates his friend as a traitor.

“There was a time when you were proud to be my friend, when you congratulated yourself on my being a maverick,” Serge bellows at Marc, who employs a world-weary sneer in most of his interactions with his friends. “You enjoyed exhibiting me untamed to your circle — you whose life was so normal. I was your alibi!”

Marc sighs dispassionately before offering this retort: “Why can’t we exchange one single dispassionate word?”

Apparently, that’s because dispassion is not on the menu of this impassioned and highly enjoyable play.