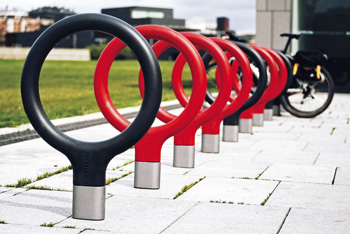 But utility and functionality? Let’s just say that’s not the selling point of most art.

On display at the Katzen Arts Center and sponsored by American University, the Spanish Agency for International Cooperation and the Embassy of Spain, the exhibit highlights the niche between art and design.

It also dispels a few misconceptions. For one thing, while artists such as Picasso, Salvador Dalí and Joan Miró solidified Spain’s artistic reputation in the 20th century, the country is not usually associated with smart utilitarian design in the way that Sweden is, for example. But after its embrace democracy in the late 1970s and the ensuing political, social and economic changes, Spain gradually became an innovator in contemporary product design. Today, Spanish designers are among the world’s most artistically avant-garde and economically productive.

The pieces at the Katzen Arts Center epitomize this blend of practical function and playful whimsy, with heavy emphasis on the latter. But this doesn’t look anything like your typical IKEA showroom.

For instance, a mannequin-like pair of large upper thighs and butt cheeks provides a visual laugh and a sitting chair, too. There’s also a set of half-dozen hollowed-out pillows stacked in a pyramid with open cubbyholes instead of cushioning; the compartments serve as storage space.

Curator Juli Capella, a world-renowned Spanish architect and designer who selected the pieces for the show, said his artists aim to create objects that reflect things used in everyday life, such as chairs and plates, but with a newfound twist. For example, an ordinary dish drying rack morphs into a teepee-shaped structure with ridges that hold dinner plates, saucers and silverware at the bottom and cups and mugs at the top.

Meanwhile, strangely striking light fixtures by Luis Eslava, a 35-year-old from Valencia, feature red and white magnets that can be put on or taken off — a quick and easy filter for dimming or magnifying light.

The best part of the exhibit is the brain stimulation each piece provides. For example, designer Nacho Carbonell invented an air-filled chair with tubes extending from the base, each attached to a “dead” animal shape on the floor. When a person sits down, he or she pushes enough air out of the chair to inflate the animals, which then perk up to a standing position.

Humor and irony can be found throughout the show. Designer Ana Mir decided she hated tampons. So she fashioned a tampon that resembles a finger because she’d “rather put this inside her,” curator Capella joked, showing a picture of the finger tampon. Mir also created a set of plates with a single black hair painted on the rim — an appetite spoiler if it was real.

“Usually young designers in Spain try to draw attention of the media by showing bold and risky projects,” Capella explained. “But these are not for mass production; just to get attention.”

Ernest Perera from Barcelona imagined a cigarette with four lungs on the side of the roll. As the smoker inhales and the bud burns closer to the filter, the lungs grow blacker, a powerful visual reminder of smoking’s health risks.

Another designer envisioned a coffee cup with the handle on the inside — utterly useless, but humorous.

Others designs though are cleverly functional: stackable bowls, plates whose corners fold up for easy drying, and elaborately designed gold-and-black tape to frame posters on the wall with cheap sophistication.

“I wanted a mix between commercial, cultural, arts and crafts, and experimental pieces from various typologies — chairs, lamps other things,” said Capella. “I didn’t want an exhibition only of bizarre stuff but also real, usable things.”

Though the pieces are diverse, all their creators share a certain Spanish flair influencing their styles. In fact, one of the main questions the exhibit aims to answer is whether Spain has its own style in the world of contemporary design.

Obviously Capella hopes viewers will come away with an affirmative yes.

“Spanish design does exist and has a strong presence, but it’s still not well known,” Capella told a Spanish newspaper. “The problem is that Spain is lumped together with a general image of Europe, where great styles of other countries already exist and dominate the world view. Few people know that Spain is an economic power in the production of furniture design and has excellent lighting fixtures that are sold all over the world.”

So the next time you’re looking for a fun chair or odd lamp — or even a flash-drive data saver shaped like the Virgin Mary that reads “Oh Maria keep my data safe!” — you know which country, or exhibit, to turn to.

For more information, please call (202) 885-1300 or visit www.american.edu/cas/museum/ or www.spainculture.us.