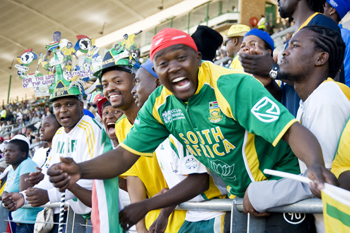 What’s black, white and kicked all over the world? A soccer ball. After all, football — the non-American kind — is one of the, if not the, most popular sport on the planet. So as countries gear up to root on their favorite team in the sport’s greatest match-up this month, the 2010 FIFA World Cup in South Africa, we decided to find out just what’s behind the tremendous international appeal of this timeless game.

Global Love of the Game

Soccer — i.e. football to everyone in the world except Americans — has some of the most ardent fans of any sport, as demonstrated by these exuberant spectators cheering on South Africa’s national squad, Bafana Bafana. The fan frenzy will reach a fevered pitch in South Africa this month when it hosts soccer’s greatest matchup, the 2010 FIFA World Cup.

With the popularity of soccer spread out over the globe, who exactly kicked off this phenomenon? “The earliest form of the game for which there is scientific evidence was an exercise from a military manual dating back to the second and third centuries B.C. in China,” according to FIFA.com, the Web site of the Fédération Internationale de Football Association (FIFA), soccer’s premier organization. But the sport’s current form is much younger, dating to 1863 in England, where the rules of the game were first established.

Football’s popularity is reflected in FIFA’s membership. Founded in Paris in 1904 by France, Belgium, Denmark, the Netherlands, Spain, Sweden and Switzerland, it has more than 200 members today and is based in Zurich. Globally, 270 million people — 265 million players and 5 million officials — or 4 percent of the world’s population, are involved in football, FIFA.com states.

Inherent in that level of interest is enthusiasm, which can sometimes seem over the top, even by American “football” standards.

“Football is about passion,” said Dominick Chilcott, the British Embassy’s deputy chief of mission. “One of our most famous and successful managers said that football was not a matter of life and death — it was more important than that.”

“Soccer is the most popular sport in the Netherlands because everybody plays it from a very early age,” said Marcel Beukeboom, counselor for international trade and multilateral affairs at the Royal Netherlands Embassy. “It is easy to do: You only need a patch of grass, four jackets [as goal posts] and a ball. It has an advantage over the other popular Dutch pastime, ice skating, in that it doesn’t need ice.” 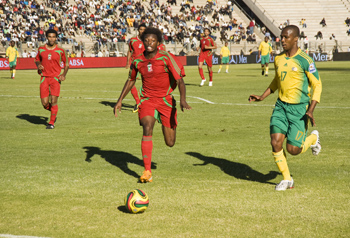 “Dutch football owes its popularity also to its successes,” Beukeboom told The Washington Diplomat. “We have had some of the best club teams in the world, we definitely had the best individual players in the world … and we played the best football.” The Netherlands is currently number four in the FIFA/Coca-Cola World Ranking, after Brazil, Spain and Portugal.

In Germany, where soccer caught on a mere 160 years ago, more than 6.5 million people play soccer in 27,000 clubs overseen by the German Soccer Association. “Soccer is the most popular sport in Germany indeed,” said Enrico Brandt, deputy head of press in the Information and Public Diplomacy Section of the German Embassy. “Germany is one of the most successful soccer nations in the world. The German national team has won three World Cups as well as three European Championships so far. The popularity of soccer in Germany has even experienced an increase when Germany hosted the 2006 World Cup, achieving third place.”

For Italians, calcio, their word for soccer, has been a way of life since the late 19th century, understandable given that the country has won the World Cup four times (1934, 1938, 1982 and 2006), becoming the most-winning country after Brazil, said Niccol? Fontana, who handles Congress, press and public affairs at the Italian Embassy.

“There’s an old saying in Italy: Soccer is life — the rest are just details,” Fontana said.

At times though, some fans take their zeal to riotous extremes. Over the decades, hundreds have been killed by melees at soccer stadiums around the world. For instance, in 2008, 13 people died in Congo after violence erupted at Matokeo stadium during a game between two local clubs after accusations flew that a soccer player was using witchcraft. In 2001, about 125 people died when fans stampeded at a match in Accra, Ghana, after police fired tear gas to control the rowdy crowd.

In Britain, the Football Spectators Act of 1989 reduced violence at games following the country’s worst-ever soccer disaster, in which nearly 100 people were crushed to death at Hillsborough stadium in Sheffield. Most recently, a qualifying match for this year’s World Cup pitting Egypt against Algeria (which won) devolved into a series of violent clashes between North Africa’s fiercest soccer rivals.

In the Netherlands, where soccer took root in the early 20th century, “the fiercest rivalry is between the two biggest cities and their clubs, Amsterdam and Rotterdam,” Beukeboom said. “Hooliganism is being contained, though, with a few incidental exceptions. The most recent cup final was between these two clubs. The two matches were played without each other’s fans, because of fear for riots.”

More than entertaining — and beyond the occasional clashes — soccer is also a great diplomat, transcending borders and promoting cross-cultural understanding as fans in one country watch their team go up against rivals in other nations.

“Every South American kid can name German, French or Italian soccer players; the same might apply to Africa, too,” Brandt said. “By watching foreign soccer teams, people learn more about other cultures, too. Nowadays, countries hosting major soccer events take the opportunity to present themselves. That is what Germany did in 2006, when it hosted the last World Cup.”

For South Africa, still working out the kinks of apartheid, soccer eases prejudices. When blacks couldn’t play in white leagues, they formed their own, but today, everyone cheers on the country’s racially diverse Premier Soccer League, made of the best 16 teams, noted Tebogo Kola, a first secretary at the South African Embassy.

Hosting the World Cup is about more than the sport, Kola said. It’s also about having people from all over the world explore South Africa, especially the nine cities hosting matches, including Cape Town, Johannesburg and Polokwane.

As with any sport, football fans wear their support on their sleeves — or on banners or even body parts. “The most unique feature is the color orange,” Beukeboom said about soccer in the Netherlands. “When our national team plays, the whole country dresses in orange.”

In Germany, Bundesliga, or German Soccer League games can attract 50,000 people, according to Brandt. “Traditionally the super fans sit or stand in the cheap seats and sing ‘fight songs’ to fire up the team and show their strength to the other teams’ supporters, who answer with their own cheers and songs. Like in a U.S. sports event, sometimes the cheers take the forms of choreographed routines, like ‘the wave’ or raising giant flags together, and the fans show team colors on jerseys, scarves and homemade signs.”

In Europe, fans tend to have a lifelong love affair with a given team, even passing their passion onto future generations. “Once you’re an ardent supporter, you tend to stick with that [team] for life,” said Kasper Zeuthen, senior press and media officer at the European Union Delegation in Washington. “It’s very important to you. It’s almost sort of a thing that’s passed through generations. When asked, ‘Why this team?’ ‘Well, you know, my father and grandfather supported this team as well.’”

Indeed, soccer-loving countries waste no time sharing their infatuation with their children. “Similar to many countries in South America, it’s the most popular game that children have as soon as they walk,” said Luciano Tanto, first secretary at the Embassy of Argentina. “Every child in Argentina would prefer to be a national player than president of the nation.”

About the only thing American football has in common with soccer, besides the name “football,” is that both games are played on a field.

“American football is an American invention,” Tanto said, whereas the British took soccer with them around the world as they built their empire.

“American football, as its name suggests, is a sport that is played in one country — not around the world, notwithstanding [the National Football League’s] efforts to export it to other continents,” Beukeboom said. “Apart from that, the way it is played does not appeal to European sports fans. The game is stopped after every play, you cannot recognize the players because they are wearing helmets and padding, there are too many players involved, games are interrupted by commercials, and there are too many rules.”

European soccer fans also relish the process just as much as the final score, a trait less common in the United States, Zeuthen noted. “Americans tend to go for the high-scoring, high-action — things have to happen all the time. To us, you can have a beautiful game when no goals are scored,” he said. “You can have a game with great passes, great tackles, things going on in the midfield with drama and life. I think to an American spectator, it’s more about the end result. We’re a bit more process-oriented — not to say that we don’t love the goals.”

Another difference is that U.S. football teams have no fear of disappearing from the next season’s roster if they have a bad showing, but soccer in Europe is less predictable. “If a team does well, more of their games are shown on TV, they get better sponsor deals, they can buy better players, and that in turn translates into this team maybe moving up the ranks,” Zeuthen explained. “On the other hand, if they do poorly, they end up at the bottom of the ranks and can get booted out…. There’s a lot at stake.”

For some countries, soccer is still gaining popularity. “Soccer in New Zealand has surged in popularity thanks to New Zealand’s national soccer team, the All Whites, being selected for this year’s FIFA World Cup Finals,” said Michelle Parish, public affairs officer at the New Zealand Embassy. “After defeating Bahrain 1-0 on aggregate in a dramatic World Cup playoff last year, New Zealand secured their place in the final. This will be New Zealand’s second appearance in a World Cup final.”

As the World Cup’s opening game nears on June 11, footballs fans are turning up the heat — and rhetoric.

“We are now doing the trash talking leading up to the tournament,” Zeuthen said. “We will make fun of each other’s teams and maybe make the occasional bet on various outcomes from certain games.”

And hopes begin to soar. “At the World Cup this year, England — sadly, the other home teams, Scotland, Wales and Northern Ireland, did not qualify — has the chance to recreate the glory of 1966, when we last won the tournament,” Chilcott said. “Will it be ecstasy or agony this time? Who knows? Whichever it is, I wouldn’t miss it for anything.”

For more information on the 2010 FIFA World Cup, visit www.fifa.com/worldcup/.