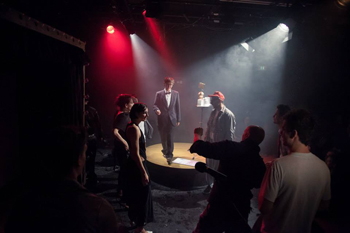 Contrary to popular belief, theater is not always a spectator sport. At least not when the Embassy of Switzerland, Austrian Cultural Forum, Goethe-Institut in Washington and Georgetown University get together to turn the tables on the audience.

Daring souls who don’t just want to go to a show, but actually “be” a part of the show should check out “Participatory Theater: The Intersection of Theater and Social Action,” the theme of this year’s Zeitgeist DC International Festival and Symposium on May 10 to 12.

The festival, which takes place at the Goethe-Institut and Georgetown University, will showcase theater innovators from Germany, Switzerland and Austria who will collaborate with D.C. actors and directors on audience-interactive performances and a hands-on symposium.

Although participatory theater is considered cutting-edge in the United States, it is a regular staple of theater in Germany and a reflection of German culture, Wilfried Eckstein, director of the Goethe-Institut, told The Washington Diplomat. “What theater means for our culture is a reflection about political and social issues. It’s always been … with the hope that the energy displayed on the stage goes beyond the stage and brings people to action.”

Participatory theater originated in the 1960s with the theater genre called Fluxus, a name taken from the Latin word meaning flow or fluid, and it involved an international network of artists, composers and designers noted for blending different artistic media and disciplines. The art form almost always touched the spectator, either talking to or directly confronting the audience, and it often involved avant-garde performances that spilled out into the street, explained Eckstein.

The Zeitgeist festival, now in its fourth year, will explore and play with the topical theme of what is private and what is public. Privacy in today’s hyper-connected world has been the source of much debate lately, sparked in part by the NSA snooping revelations and the pervasiveness of social media such as Facebook, for example. Zeitgeist DC will reflect on this phenomenon as it explores new concepts of the individual, Eckstein said.

Should an audience member’s identity remain private in the safety of a darkened theater where only the stage and actors on it can be seen? Not according to Eckstein. 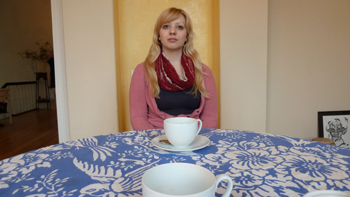 “As a participant, you are as much an expert of life as are the actors who have studied the text of somebody else’s life and performed that,” he argues. “The last 20 years of German theater shows that you, as a layman, can be enough qualified to perform on stage, and to directly interact with the actors.”

Zeitgeist DC will host three European theater companies and four productions that audience members will rotate in and out of over the course of two hours.

MerciMax, a Swiss theater collective that playfully experiments with the spectators’ perspective, will collaborate with the Shakespeare Theatre Company to produce “Coffee & Prejudice.” Each audience member of a small group will sit in a silent, draped cubby, opposite a person who might be another audience member or an actor. The audience member will listen, via headphones, to the other’s story, which will end in a twist that will defy the viewpoint of the listener and actor.

A group of young German media and theater artists known as machina eX, in collaboration with Studio Theatre, are producing “15’000 Gray,” a piece in which audience members use computer-gaming technology to direct the actors. “Eight audience members will go into a laboratory and are confronted with a problem they have to solve by finding clues and solutions in a technological environment with lights, sounds and a radio,” Drake explained.

“This changes the idea of where a performance can take place,” she added. “It doesn’t have to be on a stage; it can be in any environment. All of the sudden you are performing.”

Austria’s theater collective, God’s Entertainment, will produce “Love Club” in collaboration with Georgetown University’s Laboratory for Global Performance and Politics. The “show” takes on social issues by pushing the boundaries of what is comfortable and entertaining. It is an interactive performance based on the videogame “Fight Club,” but with lovers instead. This one could contain adult content, warns the press release. 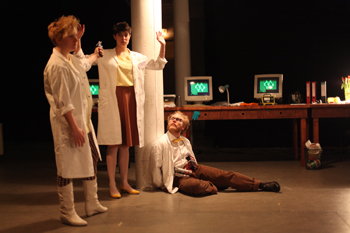 Dog & pony dc, a D.C.-based ensemble of artists, will present “Toast,” an audience-integrated theatrical work that explores “what’s possible?” Toast creates a game show for audiences around social and civic action issues whereby the audience helps to create its own theater piece. The goal is to take a second look at common technology that, when adapted or harnessed, can alter everyday life. Whereas the other productions explore the issue of privacy, the piece by dog & pony dc moves the audience into a more public arena.

Also exploring the public realm will be the video “Urban Performances: The Intersection between Art and Politics,” which highlights times when theater has taken to the streets for political or social causes. Drake cited as an example the punk music collective Pussy Riot, which has been an outspoken critic of the Russian government.

On the final day, a symposium titled “The Performer/Audience Relationship: Politics, Intimacy and the Barriers Between Private and Public” will alternate between planned audience integrative experiments and reflective response sessions.

According to Drake, participatory theater is more than entertainment. “Taking applied theater techniques into communities to help them solve problems like discrimination and poverty” is one of its ultimate goals, she said.