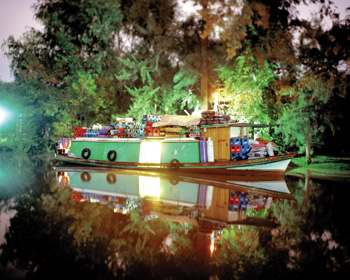 Alejandro Chaskielberg’s “Lancha Almacén (Supply Boat)” is among the striking photographs by 33 Argentinean artists in “Territories and Subjectivities” at the Art Museum of the Americas.

“Territories and Subjectivities: Contemporary Art from Argentina,” now at the Art Museum of the Americas, is a rich, tangled exhibition of photography by 33 Argentinean artists that is rooted in visual complexities accompanied by equally complicated explanations.

Looking at the striking, enigmatic images, there’s a temptation to just ignore the text and thesis-like interpretations presented by co-curators Fernando Farina and Andrés Labaké, who examine how subjectivity can define and determine notions of territory. But these ideas add a thought-provoking layer of depth to the work of these contemporary artists — and the country they call home.

“The ideas of territory and of subjectivity are interconnected,” the exhibition material states. “Identities of boundaries and belonging are formed through affiliation and familiarity. Art itself often appears in terms of issues dealing with the borders and limits of speech and the limitations of written or spoken language,” it adds, noting that the work on display hails from artists of varying backgrounds and ages, all at different stages of their careers.

All of the artists, though, are Argentinean, with each of the country’s 23 provinces represented here. Thus, much of the imagery resonates as Argentinean themes, memories, places and even obsessions. But the theoretical base that underpins the work hints at something larger, more universal, as most art strives to be. How do humans, whether in Argentina or Antarctica, create the space they call their own and thus fill the void of their surroundings? As a community, how do we define territory, with all its inherent subjectivity? Territories are more than lines on a map — they’re points in our lives, from our birthplace to resting place.

These narrative and textual themes permeate the physical world, mutating and reconfiguring the structures that give us meaning and identity, “suggesting existence as a set of determined circumstances and contexts,” according to the exhibit.

All of this gets into the realm of philosophy, introducing dense, abstract concepts that don’t necessarily elucidate the subject matter, some of which consists of very specific photographs that capture snapshots of reality, while other images are staged and surreal. If anything, the theories on the meaning of territory make you ask even more questions about the artwork — and Argentina.

Argentina has limited recognition in our universal imaginations — maybe a gaucho here, a tango there, a vague notion of modern-day economic woes or a continent-wide history of caudillos that kept an iron grip on politics. Traces of this identity, of course, crop up among the photographs, but the picture they form is much more nuanced and complex, just as the character of any nation is. 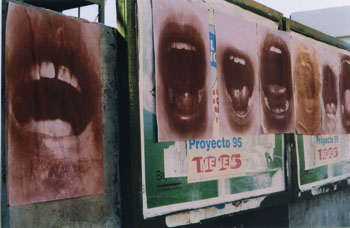 In this way, history becomes a kind of territory. Memory is a territory. Diversity is a territory. These ideas surface in Martin Weber’s sly and haunting photograph of “The Peronist,” in which a thin, cautious-seeming man holds plastic grocery bags in a room that’s a shrine to Juan Perón and his glamorous wife Eva, the iconic Argentinean leader known as Evita. The room and the man become a kind of territory of memory, with specific borders delineating a critical time in Argentina’s history.

The photographs in this exhibition are remarkable, but it’s not always clear how they fit into the stated schematic. More often they seem on the verge of escaping their territory, though they certainly convey a glimpse of Argentina that is both unique and universal.

There’s Luciano Lombardi’s striking portrait of an angelic young man in a dark-blue blazer, a pretty poseur in front of a ragged wall of gaucho tools. Sebastian Ingrassia suggests diversity in odd places — echoing Argentina’s European influences — as the young son of German immigrants works in a slaughterhouse, blond and bloody.

Edifices — buildings and homes — form another kind of territory, ranging from Gustavo Groh’s noirish apartment building to Rodolfo Hecker’s hotel awaiting a storm on a dark, windy night. Most amazing is Valeria Conte Mac Donell’s “Conquest of the Useless,” a construction of icy weavings that form a temporary home, with the end result disappearing under a bright sun.

In “Rabbit House,” a house is not a home but rather a sinister reminder of a violent past, as Hugo Aveta depicts a rundown, almost haunted building, with a hole blasted through it, where “four people were assassinated, victims of the last military repression.”

Other images defy any attempt at explanation — a garishly over-colored riverboat, a sad, terrifying sculpture of a beached whale in a forest, a woman wrapped completely in fur called “Foxy Lady.”

There are no ironclad answers in any of these images, just as the notion of territory does not provide us with definitive answers about who we are. We can call ourselves citizens of a place with boundaries, but markings on a map cannot constrain the human heart that transcends these boundaries — nor, apparently, can it constrain the imagination of Argentina’s artists.