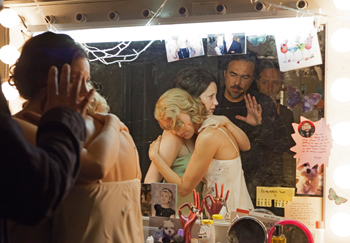 At the 2014 New York Film Festival, audiences enthusiastically embraced the closing-night film, “Birdman or (The Unexpected Virtue of Ignorance),” presented in person by Mexican writer-director-producer Alejandro G. Iñárritu. The delightful English-language black comedy is a light change of pace from the bleak tone of Iñárritu’s previous features: “Amores Perros,” “Biutiful,” “Babel” and “21 Grams.” The latter starred British-Australian actress Naomi Watts, who is reunited with the filmmaker for a supporting role in “Birdman.” At a New York Film Festival press conference, Iñárritu, Watts and other cast members discussed their new film, which shot to the top of the art-house box office in its recent limited screen debut.

“Birdman” stars American leading man Michael Keaton as Riggan Thomson, an aging, washed-up movie star best known for playing the superhero Birdman — a self-referential nod to Keaton’s real-life Batman franchise. Riggan tries to regain relevance and respectability by writing, directing, producing and starring in a new Broadway production adapted from Raymond Carver’s short story, “What We Talk About When We Talk About Love.” In a case of life imitating art, Keaton’s tour-de-force performance as Riggan has received widespread critical acclaim, creating a ton of buzz for an Oscar nomination, which would be Keaton’s first.

Keaton is supported by a talented ensemble cast including Watts, British actress Andrea Riseborough, Edward Norton, Zach Galifianakis and Emma Stone. The protagonist played by Keaton is obviously an alter ego for Iñárritu. (Norton claims to have played his own character based on Iñárritu as well, minus the Mexican accent.)

Iñárritu said the project did originate from his own experiences: “The idea came from this struggling battle that we all have with our ego, and in this case, a personal battle that I have. I just turned 50 years last year, and suddenly … you make a revision of the priorities that you have been given to your life. And some things are missing, some things are great and some things are not so great,” the director explained.

“I thought that it was incredibly interesting what I have been learning to be aware of how the ego can work,” he added.

“In my case, in the creative process, my ego has been always a huge inquisitor, a tyrant, a kind of dictator. It’s very rude and sometimes can be very misleading because sometimes when I’m doing something, I said, “Oh, this is great. This is fantastic. You’re a genius,’ and 20 minutes later, I feel like a dead jellyfish, and I said, ‘You are a stupid asshole.

“It’s a constant bipolar relation of my process,” said Iñárritu, who achieved early critical success in his own career with films like “Babel” in 2006. “I thought that would be a cool thing to portray in a film.”

The backstage antics portrayed throughout the film are also pretty cool — a frenetic series of shenanigans shot in fluid camera takes.

Watts, who stars as Lesley, one of the characters in Riggan’s play, said the experience of making “Birdman” echoed the energy of the live stage: “A lot in the way this film was shot — with the speed … the effects, the prop things, the cameras, the lighting, the removing of tables and putting them back — all of those things created this high level of intensity and pressure that felt sort of emblematic of how it feels on the stage,” Watts said.

“I think the process of making this film was so thoroughly enjoyable and so disciplined that … the actual making of it was as good as the result,” she added. “Of course, there’s nothing greater than doing a film that translates to audiences and makes people think and feel good and walk away with great revelations in their own life of some kind. When the process and the experience and the fun of that matches, it’s a good feeling.”