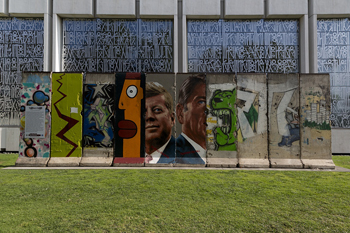 Photographs and artwork by American artists such as Carol M. Highsmith reflect on the Berlin Wall, and the 25th anniversary of its demise, in the Goethe-Institut exhibit “The Wall in Our Heads.”

Walls are the great contradictory, dual-functioning, mystical architectural constructions of mankind. They let people in, but also keep them out. They define houses, demarcate borders and stretch across empires, dividing lines of property and thought.

Walls are everywhere, like giant breadcrumbs of history, and even when a wall comes down, the ghost of it lingers. And like so many ghosts, the memories depend almost entirely on which side of the wall you came from.

Some walls like the Great Wall of China still stand as a living testament to man’s ingenuity — and fear of outsiders. Other walls only remain in our imaginations, specters from the past that often continue to shape our present.

Last month marked the 25th anniversary of the fall of the Berlin Wall, which from 1961 to 1989 existed not only as a bleeding affront to freedom everywhere, but also as a visible dagger that cleaved a country and a continent. Although East and West Germany eventually reunited, as did Europe, in many ways the two sides remain separated by political, economic and cultural differences that linger to this day.

And while the Iron Curtain may have come down, barriers — whether physical or political — continue to be put up around the world, from Ukraine to North Korea. In other places they’re beginning to fall, as revolutions in the Middle East chip away at the borders that were largely drawn up by colonial powers. Even Europe and the United States seem to be fortifying their own walls against immigrants fleeing violence in Central America and North Africa in these in uncertain times.

But as much as today’s turmoil jangles nerves, it pales in comparison to the threat of nuclear annihilation that permeated the Cold War. The construction of the Berlin Wall itself was a potential flashpoint for war between the superpowers. For Americans, the wall not only divided the German capital, it was transatlantic boundary between their ideal of Western liberalism and their archrival of Soviet communism.

The wall was also a symbol of injustice and a source of inspiration to artists. A city divided by an ugly, snaking, 96-mile barrier lined with guard stations, snipers and barbed wire became a powerful metaphor for American artists — and a dangerous reality to the Germans who died trying to breach the wall.

The Goethe-Institut in Washington examines how the Berlin Wall influenced American artists — ranging from film producers to hip hop rappers — in a stirring, eclectic exhibition called “The Wall in Our Heads,” part of a series of programs commemorating the 25th anniversary of the Berlin Wall’s fall.

The exhibition features the work of some 24 American artists inspired by both the bohemian counterculture that emerged in Cold War-era Germany and the enduring afterlife of a wall that is no longer physically there — broken up into high-priced relics and souvenirs — but still looms large as a “transnational creative exchange between the United States and Germany,” according to the Goethe-Institut.

Curator Paul Farber calls the American fascination with the Berlin Wall a form of American cultural and political reckoning. Some of the art is obvious — created by Americans living in Germany at the time. Other works touch on distinctly American themes.

Consider, for instance, the work of rap artist Chuck D, who was born a year before the Berlin Wall was constructed in 1961. He has responded to the recent immigration backlash along America’s Southwest border as a kind of musical and visual reflection with the piece “By the Time I Get to Arizona,” an ironic, compelling riff on an old Glen Campbell song.

Meanwhile, Leonard Freed, a photographer living in Berlin at the time the Berlin Wall was built, took shots of American troops inspecting the construction, including an African American soldier looking directly at the camera. It’s a searing commentary on the still-budding Civil Rights Movement that was attempting to tear down the walls of longstanding social injustice back home.

In inimitable fashion, Keith Haring is here, as is Nan Goldin, the poet of raw contemporary American urban intimacies in photography. Goldin premiered her groundbreaking 1986 work “The Ballad of Sexual Dependency” in Berlin and has said that “the best years of my life were here in Berlin.” For Americans like Goldin, Berlin would in some ways become what Paris was for the lost generation of the 1920s — a place that inspired the disaffected.

D.C. artist James Huckenpahler explored the landscape surrounding the wall and discovered an amusement park that straddled East and West Berlin; photographer and filmmaker Allen Frame captures scenes of a multicultural Berlin; and Bill Van Parys and Reyes Melendez construct an anecdotal, quasi-historical map of early 1980s Berlin, complete with national flags of the four divided sectors. In the East, there’s a place designated simply as “Spies” and an address as “Wiped off the Map, 1943-1945.” Under the French-sector flag, there’s the label “boring stuff.”

It seems only fitting that Americans should be drawn to the wall. It’s a ghost, but it still intimidates. As the exhibit points out, during the Cold War, “the Berlin Wall was the world’s most notorious line of demarcation” — a global epicenter of “ideological conflict, military occupation and artistic experimentation.” It was also a mirror for many Americans of the walls they erect and those they fight to break through — the ruins of which cannot be forgotten.

The Wall in Our Heads: American Artists and the Berlin Wall