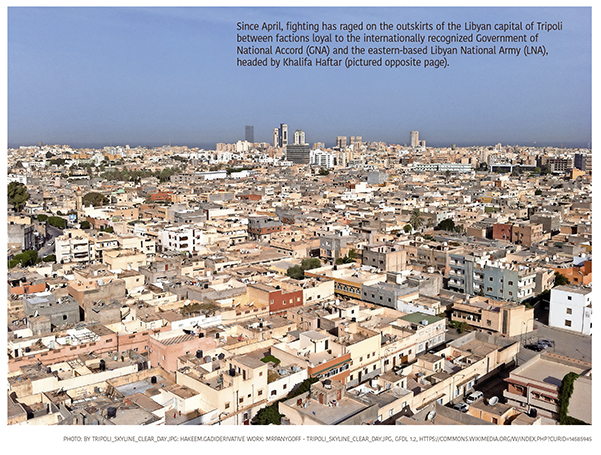 With fighting continuing to rage in the outskirts of Tripoli, Libya’s current civil war shows no signs of abating, as a lethal combination of outside interests and internal grievances fuels further destruction.

“The country has become a theater for the wider, geopolitical duels of the Middle East,” says Claudia Gazzini, the International Crisis Group’s Libya expert.

With over 650 dead and nearly 100,000 displaced so far in what has become a protracted stalemate, experts fear that Libya, which was already lawless since the fall of dictator Muammar Gaddafi in 2011, could become the next Syria.

The current round of fighting broke out on April 4, when the leader of the eastern, Benghazi-based Libyan National Army (LNA), Khalifa Haftar, launched “Operation Flood of Dignity.”

The multipronged offensive targeted Tripoli, the capital of the internationally recognized Government of National Accord (GNA), led by Prime Minister Fayez al-Sarraj.

Haftar — a former general under Qaddafi who had been living in exile in Northern Virginia for two decades before returning to Libya during the Arab Spring uprising — stunned the world by launching his surprise attack while U.N. Secretary-General António Guterres was in the capital planning a conference to reconcile Libya’s various armed factions. 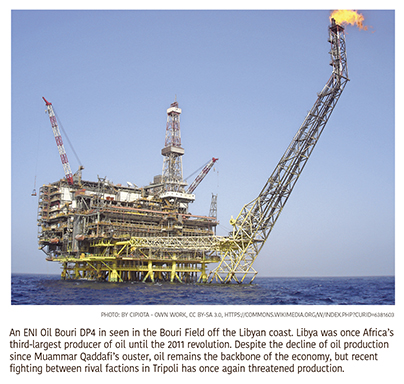 Perhaps expecting a lightning-fast victory to gain leverage ahead of peace talks, Haftar and his troops were instead thwarted by the GNA and other armed groups from the western cities of Misrata and Zintan that joined the U.N.-backed government, which launched its own counteroffensive dubbed “Operation Volcano of Anger.” Since then, fighting has stalled, threatening to plunge the city of over 1 million into all-out war.

Meanwhile, international efforts to restart a shattered peace process have been increasingly hampered by shifting positions among global players and strategic rivalries between regional power blocs.

Haftar enjoys the support of Egypt, the United Arab Emirates and Saudi Arabia, as well as France and Russia, which view the strongman as a bulwark against Islamist militants. Meanwhile, Turkey, Qatar and other Western countries back the GNA. The U.S. had also supported the GNA, but President Trump recently muddled the issue when he endorsed Haftar’s military campaign.

Both Haftar and the GNA have ignored calls for a ceasefire. Haftar, 75, was an officer in the coup that brought Gaddafi to power in 1969. He later became a U.S. citizen after falling out with Gaddafi in the 1980s, returning to Libya in 2011 to join the rebels trying to depose his former boss. Three years later, Haftar and his self-styled band of militias launched an offensive to oust Islamist extremists from Benghazi, eventually forming a stronghold in the country’s east.

Haftar says he launched his current offensive to rid Tripoli of the terrorist groups and militias that had “infested” the U.N.-backed government. But critics say the warlord is just another authoritarian in the same vein as Gaddafi — bent on amassing power and Libya’s riches.

Web of Warring Factions and Acronyms

Relations between the LNA and GNA had never been good. Prior to 2015, the former had been a supporter of the Libyan House of Representatives. The body had been controversially elected in 2014 but was forced to move to the eastern city of Tobruk after the General National Congress (GNC), a self-declared rival parliament led by Islamist-aligned groups that disputed the elections, seized power in Tripoli.

In December 2015, after a major diplomatic initiative by the U.N., with strong U.S. support, many of the country’s warring parties were then formally brought together under the Libyan Political Agreement. This established the power-sharing GNA, yet in practice, the Tobruk and Tripoli governments never gelled.

One of the reasons for this rupture was that the new, internationally recognized Libyan government encompassed a wide range of groups and individuals, including some the LNA and its largely eastern constituency did not trust or support. 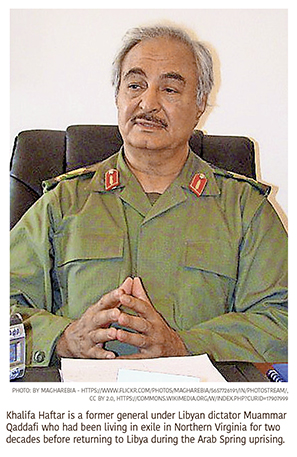 In particular, many in the LNA have accused the GNA and its ruling Presidential Council of failing to take action over the 2017 massacre of LNA personnel at the Brak Al-Shati airbase by militia belonging to a pro-GNA group based out of the western city of Misrata.

With Libya split between these two rival camps and further carved up by a constellation of warring militias, each with their own ethnic, tribal, geographic and ideological motivations, the GNC has been too weak to unify the oil-rich country.

Meanwhile, this chaos and conflict has left a vacuum for the growth of the Islamic State in the country. In March 2015, the group seized the coastal city of Sirte, while it had also long held Derna and controlled parts of Benghazi and Sabratha.

Combating this growing threat thus became an increasing concern for outside powers.

As a result, U.S. airstrikes supported the pro-GNA Bunyan al-Marsous militia, also from Misrata, to dislodge the Islamic State from Sirte, while French special forces have long worked with the LNA against the Islamic State and other militant groups in the east.

Meanwhile, the LNA-supported Tobruk government, which prior to 2015 was Libya’s internationally recognized government, had been able to sign a number of military cooperation deals, particularly with neighboring Egypt, which supported its operations against jihadi groups.

In addition, the general has won the support of Saudi Arabia and the UAE, with Haftar meeting Saudi King Salman in Riyadh just days before launching “Flood of Dignity.”

“Saudi Arabia, the UAE and Egypt have hoisted the flag of the fight against political Islam around the Middle East,” said Gazzini of the International Crisis Group. “These three countries have been most active in supporting Haftar, who has also embraced their worldview.”

The GNA has not been without its international backers, either. The regional rivals to the Saudi-Emirati-Egyptian bloc, Turkey and Qatar, have been strong supporters, with Turkey widely reported to have sent military equipment to bolster the GNA after Haftar began his push on Tripoli.

All outside powers in fact have been accused of sending weaponry to their respective clientele militias in violation of a U.N. embargo on arms supplies to Libya.

Europe, too, is heavily invested in what happens in Libya. France has thrown its weight behind Haftar, viewing him as a stabilizing force who can prevent migrants from trying to flee to Europe.

At the same time that France has gravitated toward Haftar, Italy has supported the GNA and condemned France for what it sees as Paris’s blocking of European Union efforts to condemn the general’s offensive. 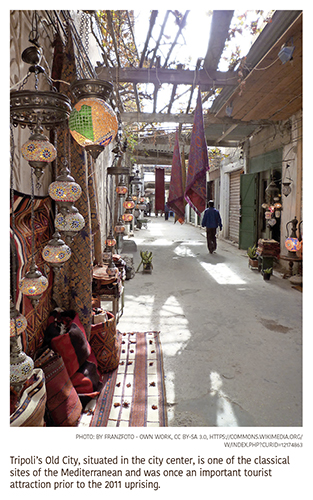 “Rightly or wrongly, France interprets the LNA as an important counterterrorism partner and a potential ally in its broader Sahel strategy,” said Alia Brahimi, director of Legatus Global and an experienced Libya analyst.

Indeed, a few days after the start of the general’s push on Tripoli, it was these anti-terrorism credentials that were also voiced by an unexpected party: the U.S. president.

In a call to Haftar on April 15, when LNA and GNA forces were already fighting in the Tripoli suburb of Ayn Zara, President Trump praised the general for his “significant role in fighting terrorism and securing Libya’s oil resources,” according to a statement from the White House released five days later.

This contradicted earlier U.S. policy, with the president’s call coming a week after Secretary of State Mike Pompeo announced America’s opposition to the general’s offensive and urged “an immediate halt to these military operations.”

Since that unexpected call, however, U.S. officials have remained cool toward Haftar, with Pompeo reportedly considering a range of options, including a U.S.-enforced ceasefire.

Nevertheless, Trump’s position has dominated the debate, as a U.K. resolution at the U.N. Security Council calling for an immediate ceasefire foundered in the face of U.S. and Russian opposition.

Moscow had until then tried to maintain good relations with both the LNA and GNA, inviting both Sarraj and Haftar to Moscow as it worked to balance its friendship with GNA allies such as Turkey on the one hand, and LNA backers such as Egypt on the other.

Haftar, it appears, now has the edge in this relationship, with Russia objecting to the British resolution reportedly because it blamed the general for the renewed fighting.

As for the actual anti-terrorism credentials of the LNA and GNA, the picture is far more nuanced than is often presented.

While “the GNA has a longstanding and problematic relationship with militias, some of which are Islamist, and still others of which are radical,” said Brahimi, “it was the GNA’s Bunyan al-Marsous force which ejected [the Islamic State] from Sirte. At the same time, there’s also the problematic alliance between the LNA and a number of Madkhali Salafi groups, countrywide.”

“These are radical guys, by any measure,” said Brahimi. “They might not be an international counter-terrorism concern today, but they will be tomorrow.”

As this web of local and international actors jockey for power, the Islamic State has once again reared its head, with the group claiming a May assault that killed nine of Haftar’s soldiers, among other attacks in the country’s south. 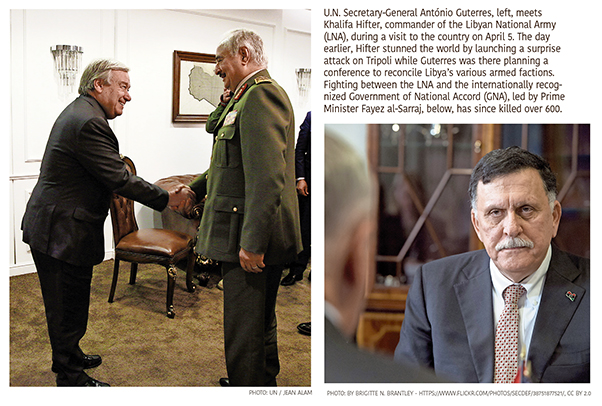 The GNA’s failure to deal with radical groups within its own ranks also speaks to the wider issues of disarming and demobilizing across Libya, while building a secure, equitable state and funneling resources to economic reconstruction and growth, rather than conflict and militia-building.

These were the issues that were due to be discussed at the Libyan National Conference, scheduled to begin just 10 days after Haftar launched his offensive.

The gathering, scheduled to be held in the relatively neutral northwestern town of Ghadames in mid-April, had also been convened to organize fresh nationwide elections.

Yet, with shells landing in and around Tripoli, the head of the U.N. Support Mission in Libya (UNSMIL), Ghassan Salamé, indefinitely postponed this latest attempt to foster a democratic transition in the war-torn country.

If it had gone ahead, the conference would have produced the results of a unique, months-long consultation exercise, conducted by UNSMIL and the Geneva-based Centre for Humanitarian Dialogue. This involved thousands of consultations with ordinary Libyans, both online and face to face, between April and July 2018.

The result was a wish list of Libyan desires to be debated in Ghadames by 120 to 150 Libyan-only delegates drawn from across the country and all walks of life.

The list of top desires included: a united Libya with a government based on competence, not identity; a fairer distribution of state resources; a united military, free from political interference; and a professional police force.

Naturally, becoming a battleground for competing local, regional and international interests did not feature on any Libyan’s wish list. Yet now, that is the fate the population of this besieged country will likely face, as Salamé warns that the battle for Tripoli could mark the “start of a long and bloody war.”

“With both sides bogged down in Tripoli’s suburbs, now would normally be a good starting point for negotiations,” said Gazzini. “Unfortunately, though, both sides still feel they have a strong chance of winning, while none of the outside states want to accept the defeat of their local ally, as this would mean a defeat for their ambitions across the region.”

And without some kind of outside push for peace, Gazzini predicts that neither side is likely to prevail or back down, which means the likely outcome is a deadly stalemate.

It also means that it may be some time before the voices of ordinary Libyans are heard again in this long-suffering North African country.