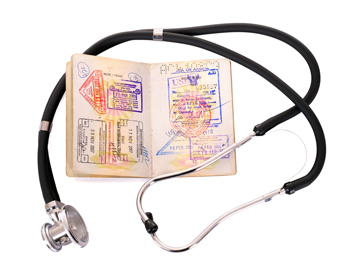 When Saad (name changed to protect privacy) arrived in Washington, D.C., for the first time in 2009, he was 19 years old and terrified. Two years earlier, the young Saudi Arabian man had been diagnosed with a rare form of pancreatic cancer, a disease that usually strikes much older people.

“It was very slow growing but also very slow to respond to medication,” he said. After a course of chemotherapy and radiation at a Texas hospital, complications from surgery resulted in severe damage to his intestine. Saad was sent to MedStar Georgetown University Hospital for an intestinal transplant. “I came with my mom and dad, and I didn’t now anyone here,” he recalled. “I didn’t speak a word of English. I was in bad condition, and I was very frightened.”

With no intestine, Saad was entirely dependent on total parenteral nutrition (TPN), receiving all his food intravenously. As he awaited a match for an entire small bowel transplant, the health crises began to pile up. The TPN damaged his liver — “I was almost like a yellow person, and very weak,” he remembered. Next, his kidneys began to fail, and Saad spent two weeks in the hospital in a coma. “When I awoke, I found myself on dialysis. I almost lost hope. But two weeks later, there was a match for a liver, kidney, small bowel and pancreas transplant, and they did the surgery.”

The complications weren’t over. The post-transplant medications Saad needed caused necrosis (cell death in the bone) of his hip, and he ultimately underwent a hip replacement surgery, also at Georgetown. 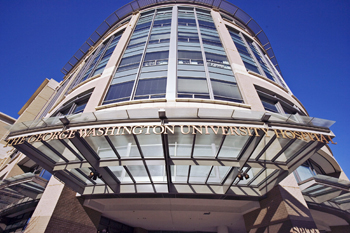 But today, after years of rehab and physical therapy, Saad says he’s feeling fine. “I can’t run or play hard-contact sports, but I can walk, I can go upstairs, I can swim, I can dance — I can get married!” he exults.

He credits his life and his health to Georgetown’s transplant physicians and international patient team. “They are all like family to me,” Saad said. “Dr. [Thomas] Fishbein, Dr. [Raffaele] Girlanda and Dr. [Cal] Matsumoto, who performed the transplant, as well as the transplant nurses gave me such good support. At times I was in despair, but Dr. [Paul McClore] Jones, the pediatric psychiatrist, and the nurses were always there for me and gave me such valuable advice.”

Saad’s “home team” while at Georgetown was the international patient staff, led by international services manager Safwa Osman. “They made me feel so at home here,” he said — so much so that he nurtures hopes of studying in the United States as a college student.

For thousands of people like Saad, who come to the Washington area every year from more than 100 other countries around the globe seeking the world-class medical care the area is known for, international patient programs are the key to a successful care experience.

Three hospitals in the Washington area have established international patient programs. Besides Georgetown, George Washington University Hospital and Johns Hopkins also cater to the sometimes-complicated needs of patients coming to the United States from overseas for medical care.

Salazar’s staff of four serves many roles: One staff member speaks five languages, while the other three are bilingual. All of them understand the importance of promptness with international patients. “We schedule appointments within 24 to 48 hours,” she told us. “Our doctors are aware that patients may be here for a very limited time and need to be seen immediately. We have a great relationship with our physicians in which they truly recognize the need of the international patient.”

Salazar said that any international program must have a holistic devotion to its patients’ needs. “This isn’t a 9 to 5 job, and it’s not a Monday to Friday job,” she said. “Whatever time our patients call, we’re there.” 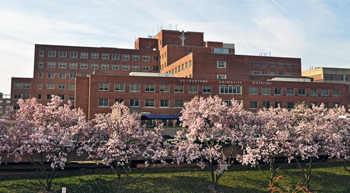 At MedStar Georgetown University Hospital, the Lombardi Cancer Center, its top-rated neuroscience program and its transplant team tend to attract the most patients from abroad.

Meanwhile, at Johns Hopkins, more than a third of its international patients come for cancer care, according to Burak Malatyali, vice president and chief operating officer for Johns Hopkins Medicine International. With the Sidney Kimmel Comprehensive Cancer Center on its main campus in Baltimore, Md., already full with patients from the region, Hopkins has built a branch of the Kimmel Center at Sibley Memorial Hospital in D.C., where it expects to serve many international patients. Similarly, the National Heart, Lung, and Blood Institute at Suburban Hospital, opened in 2006, is expected to be the site of care for many of Hopkins’s international cardiovascular patients.

Hopkins’s program, officially launched in the mid-1990s, is the largest in the area. Malatyali said its staff now comprises nearly 300 professionals, who help coordinate care for some 5,000 foreign patients every year. He estimates that that number has increased by about 60 percent just since 2008, and he predicts that Hopkins’s international patient load will double by 2016. “We are one of the top two or three hospitals in the nation in terms of serving people coming from outside the U.S.,” he said. 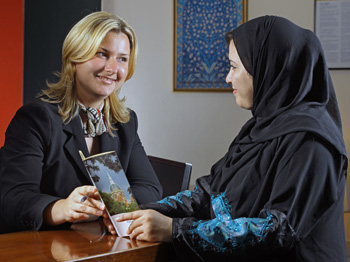 The international patient program at Johns Hopkins, officially launched in the mid-1990s, is the largest in the area and coordinates care for some 5,000 foreign patients every year.

Malatyali’s staff includes a team of international medical concierges, who respond to all contacts from overseas patients. “Until you come to Hopkins, you work with one person who will be responsible for you all the way — finding the right doctor, collecting medical information, helping you open a bank account, or find lodging or a car or a nanny for your children.”

Once patients arrive in Baltimore, they are assigned to one of a staff of 85 international care coordinators, who are not only proficient in their assigned patient’s language, but also in medical translation. The staff also includes an army of financial counselors and “patient experience” specialists, whose job is to understand what an international patient goes through and how to make that experience better.

Duncan of Georgetown University Hospital says that tending to details such as lodging and translation is critical to making a foreign experience less foreign — and less frightening.

“When a patient is coming to the U.S. for the first time and has a very frightening road ahead medically, it makes it even more frightening when they don’t speak the language and aren’t familiar with the way things are done,” she said. “Our staff is there for the international patients from the beginning, and can follow them for what can be up to a four-year process.