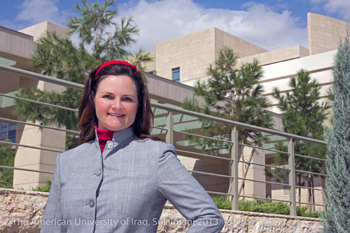 Just 40 miles from the Iranian border, a modern campus of sleek buildings constructed from Jerusalem marble and tinted glass overlooks the city of Sulaimani (Sulaymaniyah) in the Kurdish region of Iraq. Within its 418 acres, some 1,000 young men and women live in spacious dorm rooms and study with the aid of 10 sophisticated computer labs containing hundreds of internet-connected PCs and a library boasting thousands of English-language volumes.

When they’re not hitting the books or cramming for a test, these lucky students have a world of extracurricular activities to choose from — everything from basketball to a local chapter of the Jane Austen Society.

Welcome to the American University of Iraq, Sulaimani (AUIS), an oasis of liberal thinking in a part of the world fraught with bloodshed, ethnic rivalries and centuries-old hatred.

“It’s like any college campus in the world — beautiful buildings, students running around in blue jeans, taking classes and drinking coffee,” said Dawn Dekle, who’s been president of AUIS since September. “You wouldn’t know it’s in a conflict zone.”

Dawn Dekle, president of the American University of Iraq, Sulaimani (AUIS), is the first woman ever to head any university in Iraq.

Dekle — the first woman ever to head any university in Iraq — knows a thing or two about living dangerously.

Before relocating to Iraq, she spent two years in Kabul as provost of the American University of Afghanistan (AUAF), whose campus is surrounded by razor wire and snipers on the roof in case of attack. And for good reason: More than once, female students off campus had acid thrown in their faces by Taliban militants outraged by the idea of girls getting an education.

“Under the Taliban, women never went to school, so unfortunately, you have a whole generation of women who are functionally illiterate,” Dekle told The Diplomat during a mid-October recruiting-fundraising trip to Washington. “It became very difficult for us to find women who could be admitted. When I joined AUAF, only 5 percent of the class were women. By the time I left, I had gotten that up to 33 percent, and 50 percent of the incoming freshman class were women.”

The American University of Afghanistan was established in 2006. At that time, it was 80 percent funded by the U.S. Agency for International Development. By the time Dekle left for Iraq, USAID’s share of the school’s budget had dropped to 42 percent; the remaining 58 percent comes from private donations by wealthy Afghans “who want to give something back,” she said.

Even though the American University of Iraq is “a carbon copy” of the older school in Afghanistan, she said the contrast between Kabul, home of AUAF, and Sulaimani, home of AUIS, is dramatic.

“The perception in Afghanistan is that we’re going to abandon them. There’s an economic bubble happening, and all the NGO money that went in is going out. The bubble is going to burst. But in Iraq’s Kurdish region, very little American money has been going in,” Dekle said, noting that the oil-rich area is booming with luxury hotels, modern highways, wireless Internet and high mobile phone penetration.

“The Kurdish region is very supportive of the United States because we’ve helped them in the past, so there’s no [anti-American] tension. They’re happy to have us. Also, many people have aspirations of sending their sons or daughters abroad for an education. So even if you’re a Kurdish businessman and you hate American foreign policy, if you can’t get a U.S. visa for your child, then the alternative is to put your son or daughter in the American university. We’ve brought the education to them.”

And unlike the American University of Afghanistan, AUIS is located in a prosperous, peaceful region of Iraq that, while still vulnerable to attacks, has little of the day-to-day violence that has come to characterize the rest of the country, especially the area around Baghdad.

“I don’t think we could operate a university in Baghdad right now. It’s too soon,” Dekle told us. “Having said that, I would love to operate a branch campus in Baghdad, maybe an English-language center so students could learn English, and once they get their English up to par, they could come up to Sulaimani.”

Just to be on the safe side, AUIS is protected by armed fighters of the Peshmerga, which is Kurdish for “those who face death.”

“It’s completely quiet there, and located in a valley, in a city with a million people,” Dekle said, noting that Sulaimani is a three-hour drive from Erbil, with direct daily flights linking Sulaimani to Istanbul, Vienna, Munich, London, Frankfurt and Dubai.

“It’s been my dream to be president of a university in a developing country with an interesting political situation,” the Austin, Texas, native told us. “So I’ll stay there as long as they let me.”

Dekle, 46, has an undergraduate degree from Texas A&M University. She also possesses a Ph.D. in psychology from Dartmouth College and a law degree from Stanford University, “neither of which I use in my job,” she joked.

After graduating from Stanford, Dekle moved to Singapore, worked her way up the academic ladder, got recruited by McKinsey & Co. as a leadership expert, and ended up as the dean of Singapore’s S.P. Jain School of Management.

Dekle said few of her friends back home approve of her risk-taking career path.

“Everyone thinks I’m crazy. They don’t understand what I’m doing, or they think I’m a mercenary and I’m just there for the money,” she said. “The truth is I want to be part of history, and right now Iraq and Afghanistan are making history and I have a front-row seat. It’s an absolute honor to be there. I’m completely committed to this dream.” 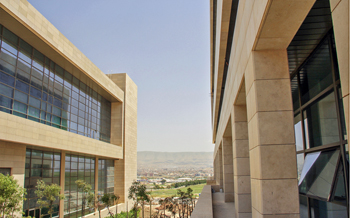 The American University of Iraq, Sulaimani, located in the Kurdish region of the country, boasts a state-of-the-art 418-acre campus with spacious dorm rooms, 10 sophisticated computer labs and a library containing thousands of English-language books.

AUIS is the brainchild of Barham Salih, former prime minister of the Kurdistan Regional Government (KRG), who had long envisioned establishing a university in the Kurdish region.

“That’s largely because his daughter had such a great experience at Princeton and because his son had gone to Columbia,” Dekle said. “He himself was educated in the U.K., but he knew — because of the American Universities in Beirut and Cairo — that this could be done, and that it could stabilize Iraq. Even though he’s not wealthy, he’s the one who made it happen.”

Both AU Beirut, which was inaugurated in 1866, and AU Cairo, which was formed in 1919, are incorporated in New York. But AUIS is organically Iraqi. Two-thirds of its students are from Sulaimani itself, and 80 percent from the area administered by the KRG — “though with each admission cycle, we get more from outside the Kurdish region,” she said.

Dekle explained that Iraq still adheres to an old-fashioned system whereby high school students take an exam called the baccalaureate and get placed into university programs depending on their scores. Those scoring 90 percent or above automatically get placed into engineering, architectural or medical programs, while lower-scoring students are relegated to nursing, liberal arts and the humanities.

“What makes our school unique is that a student applies and gets admitted to the university, not a program. Secondly, we’re American-style and that’s why we call it the American University. This means critical thinking, teaching students how to use information to make decisions. It’s a liberal tradition grounded in our core curriculum: humanities, social science, math and science courses,” she said.

“We’re primarily a teaching institute, but we encourage research as well, so we want to develop centers of excellence and expertise. Our experts focus on things like Iraqi archaeology, Kurdish poetry, and oil and gas in the Kurdish region.”

AUIS has 42 full-time faculty members, and another 40 instructors teaching in the English language program. Most are Americans with doctorates, and those who aren’t at least have American credentials.

“In both [the American University of] Afghanistan and Iraq, English is the language of instruction. Unfortunately, not every student is fluent in English, so we offer a yearlong preparatory program, which in Iraq 90 percent of our students go through,” she said, explaining that students must score 420 or above on a basic TOEFL to find out where they stand. “They can’t be absolute beginners.”

Dekle said it costs between $14,000 and $15,000 to educate one student for a year — far more than the highest possible tuition the school charges of $6,500. The average student pays $3,500, and those who score highest on their entrance exams pay “next to nothing.” That gap is made up partially through scholarships provided by several institutions such as the Mansour Investment Bank of Baghdad.

“This scholarship will pay the full fees of students from Baghdad,” she said. “We also have the KRG Academic Excellence Scholarship for students [from the Kurdish autonomous region] who score above 85 percent. We’re looking to make our school accessible, not based on rich kids who can afford it, but based on merit. We’re looking at a few hundred scholarships.”

At AUIS, one in three students are women, though Dekle wants women to constitute at least half the student body. “Our female students are the best ambassadors. They reach out to their friends, sisters and cousins, creating a legacy effect,” she said.

“We’re trying to be a safe space where everybody — independent of religion, ethnic group or tribe — can come and study together. The Kurdish region is largely Sunni, though we have a number of students who are Shi’a. We also have representation from all the tribal groups.”

Kyle Long, the school’s director of communications and institutional development, said that ethnically speaking, 80 percent of AUIS students are Kurds, another 15 percent Arabs and the remaining 5 percent other minorities.

But the student body could one day include aspiring young engineers, computer scientists or educators from nearby Iran as well. After all, the Iranian border is less than an hour’s drive away from Sulaimani.

“We can tell from our website who’s accessing it, and there’s some evidence to suggest that Iranians are quite interested in AUIS,” Long said. “We aspire to be a regional university like Beirut or Cairo, but we need to start slowly. We need to build the brand a little more in southern Iraq, but ultimately we do want to become a regional institution serving Syrians, Jordanians and others — so Iran is part of that.”

In late September, Iraq’s new ambassador to Washington, Lukman Faily, visited AUIS, which has received large donations from the Kurdish Regional Government. But corporate donors have helped as well, led by the Anglo-Turkish oil conglomerate Genel Energy, which gave the university $20 million, and British oil giant Afren, which kicked in $30 million.

“These companies want us to build capacity for the workforce in the region,” Dekle explained. “They want to hire our graduates and they believe in our mission.”

And that mission is what keeps Dekle in the Middle East, despite the ongoing violence. Asked if she ever plans on returning to the United States permanently, Dekle laughed.