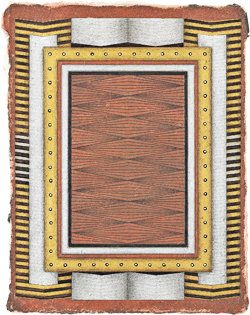 But the Indian-born artist’s new exhibition “Anil Revri: Faith and Liberation through Abstraction” at the American University’s Katzen Arts Center is — according to the artist himself — a deep meditation on the ways religion can help and hinder the human experience. It’s about how religion should unite rather than disunite, Revri explained during a discussion of his exhibition at the Indian Embassy.

“The central message is that religion is not a divisive force,” Revri said, although it’s clear from some of his comments and even his work that he is not always comfortable with religious dogma.

“It is the dogma of religious scripture that prevents us from uniting with the Supreme Being,” he said, adding that, “I’d rather be a good human being than a good Hindu.”

The Katzen exhibition offers a comprehensive look at the New Delhi native’s artwork, which frequently consists of geometric grids that give the viewer perspective by drawing attention from the outer edges into the serene center of the canvas. Revri leads the viewer into the void — represented by negative space — employing a variation of dotted, curved and oblique lines that help create the illusion of three-dimensional space.

Trained as a draftsman, Revri is able to construct visual effects that resonate in surprising ways. He works without the assistance of computers or other digital technology, relying solely on old-fashioned rulers to create his precise lines. Most of the work is constructed on a grid and while at times repetitious, patient viewers will find myriad optical rewards.

The first part of the exhibition, titled “Works: Ram Darwaza,” is heavily geometric in nature and consists of mixed media on canvas. The second part, “Works: Pages From a Manuscript,” employs a more varied color palette as Revri switches to mixed media on handmade paper. While the images are impressive and even sometimes mesmerizing, it can be difficult to extract religious meaning from them. 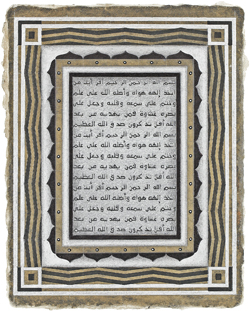 Indeed, the Katzen describes Revri’s paintings as “aids to meditation, while at the same time the process of their creation is itself an act of meditation.”

“They are beautiful, their craft is breathtaking, but their success depends on whether they further us, and the artist, along in the process of our own enlightenment,” said Jack Rasmussen, director and curator of the American University Museum at Katzen.

The religious connotations become more apparent in a series of three “suites” presented as mixed media on arches paper, mostly in gilded gold and inky black or grey shades. In some frames, Revri depicts semi-recognizable edifices represented by religious structures.

In these works, Revri uses more literal material to convey his meditation on religion. He employs texts from various religions — Buddhism, Christianity, Hinduism, Judaism, Islam, etc. — as the focal point, with the text becoming abstract space at the center of the piece. The effect grounds the viewer and gives him or her something more tangible than his other strictly geometric patterns.

“Now is the gracious Lord’s ordinance promulgated, no one shall cause another pain or injury; all mankind shall live in peace together, under a shield of administrative benevolence,” reads the text from the Sikh holy scripture at the center of one particularly ornate piece.

According to the Katzen, these spiritual meditations were inspired in part by Byzantine icons, which were thought to be windows into heaven. Through the icon, the viewer could know God and experience the miraculous, and it was expected that the Byzantine iconographer would lead a life of prayer, discipline and devotion — principles Revri adheres to in his own art.

Infinity also plays a large role in his work and is used to convey the different states of the conscious and subconscious.

After spending years working in more extroverted mediums, Revri said the religious themes encourage viewers to look inward, as he has done.

Spanish artist Cristóbal Gabarrón has exhibited his paintings and sculptures in hundreds of shows all around the world, but “Gabarrón’s Roots” at the Katzen Arts Center marks his first display in Washington, D.C.

It’s about time. The artist, now in his 60s, began exhibiting his work regularly at the tender age of 19.

Washingtonians will get a taste of his strangely haunting “tondos,” or circular works of art, that evoke primitive cave paintings or indigenous tribal art, as well as his more modern, life-size sculptures featuring in vivid colors and striking shapes.

The exhibition is one of the Katzen’s continuing collaborations with the Embassy of Spain and runs through April 15.