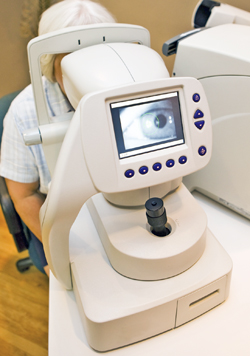 The retina is an essential component of your vision: It’s the layer of tissue in the back of your eye that senses light and sends images to your brain. Nearly 2 million people in the United States alone have severely impaired vision due to diseases of the retina, many of which are progressive and have few treatment options.

But what if you could generate your own new cornea or retina with just a few cells taken from your own skin? It sounds like science fiction, but recent advances in stem cell technology and ophthalmology make it something that could be happening at a leading hospital near you within the fairly near future.

In January, the results of the world’s first human trial using embryonic stem cells to treat eye disease appeared in the Lancet. The trial, conducted by scientists at the Jules Stein Eye Institute at the University of California-Los Angeles and funded by California biotech firm Advanced Cell Technology, involved two female patients — an elderly woman with dry age-related macular degeneration, a leading cause of blindness in the United States, and a woman in her 50s with Stargardt disease. Both were considered blind.

Embryonic stem cells had been coaxed to grow into retinal pigment epithelium (RPE), a highly specialized tissue whose malfunction is at the heart of many eye diseases. After injections of 50,000 new RPE cells into their diseased eyes, both women were doing well and the cells had attached to the eyes’ membranes as doctors had hoped, although it was still too soon to say how their vision would improve, if at all.

Someone who had been waiting for the results of the trial is Dr. Stephen Tsang, assistant professor of ophthalmology, pathology and cell biology at Columbia University Medical Center in New York. Creating patient-specific cell lines that can be used to treat eye disease is one of Tsang’s primary research goals.

Tsang has been doing research similar to Advanced Cell Technology and UCLA’s work, and he has also been able to coax embryonic stem cells to develop into RPE cells, or into corneal stem cells.

“The technology is most advanced with corneal stem cells,” he said. “For people who have had a bad alkaline burn to the cornea or another trauma, we will soon be able to take stem cells from the good eye and help generate a new cornea for the other eye.”

But what if the person’s eye damage comes from a disease, such as diabetic retinopathy? If the disease is part of the patient’s own genetic code, transplanting new corneal or retinal cells with the patient’s existing genetic programming could just reintroduce the same disease.

In some cases, that would actually be fine. With a condition such as age-related macular degeneration (AMD), that might not even be so bad, says Dr. Lucian Del Priore, professor of clinical ophthalmology at Columbia and a noted researcher in the application of stem cell technology to eye disease. “Newly generated retinal cells should behave as if they are brand new, which should give the patient another 55 or so years before AMD sets in,” he explained.

To use cell-based therapy for patients with such diseases, ophthalmologists will need to correct the “mistake” in the original genetic code. The early results from the UCLA trial, showing that this process can be done safely, are a promising first step. Tsang soon hopes to apply to the U.S Food and Drug Administration for a trial that would involve using human skin cells (rather than embryonic stem cells) to correct eye defects. “We would take stem cells from the skin of patients with the most severe macular degeneration, correct the genetic defect, and re-implant them,” he explains.

But even before stem cell therapies becomes ready for prime time, personalized medicine and genetics are already being used to treat eye disease — allowing ophthalmologists to select the perfect drug for an individual patient, or to develop new drugs that target individual genetic mutations that cause eye disease.

“At Columbia, we’re generating patient-specific cell lines that allow us to test hundreds of new medications,” said Del Priore. “The ability to do this large-scale screening really lets us establish the efficacy of a drug across a wide range of patients.”

Many patients with eye disease already receive a personalized genetic “prescription.” When patients come to the Edward S. Harkness Eye Institute at Columbia with certain genetically linked eye diseases, like age-related macular degeneration, they are screened to see if they have one of the known genetic mutations involved with that condition.

“With AMD, for example, we now know of about 10 genes involved with susceptibility to that disease, and we know the variants in those genes that increase risk, so we can estimate the risk of certain patients for getting the disease and for disease progression,” said Rando Allikmets, research director of the Harkness Eye Institute.

In most cases, gene defect-specific medications for eye diseases aren’t yet available, but that, too, may soon be changing for many conditions.

For example, scientists screening hundreds of drug targets for a possible treatment for retinitis pigmentosa — a group of inherited eye diseases involving retinal degeneration — recently found that retinal cells with a specific type of degeneration survived longer in laboratory culture if the culture contained an anti-seizure medication called valproic acid. A small study in patients with retinitis pigmentosa then showed that their eye degeneration slowed down when they started taking valproic acid. Now, the treatment is being tested in a larger phase II clinical trial with about 90 patients, which is still recruiting.

Whether it’s stem cell therapy or new, patient-specific medications (or old medications used for new purposes), genetic and cellular technologies have the potential to slow down, improve or even reverse hundreds of thousands of cases of vision loss every year.