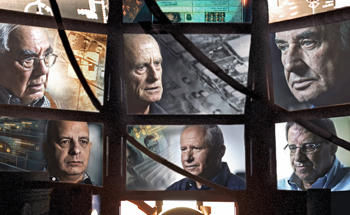 ‘No’ and ‘Yossi’ and Repertory Notes

Israeli director Dror Moreh’s (“Sharon”) remarkable documentary “The Gatekeepers,” inspired by Errol Morris’s “The Fog of War,” brings out into the open what had previously remained largely hidden in the shadows. Moreh managed to convince all six living former directors of the Israel Security Agency (ISA), the highly secretive domestic counterterrorism intelligence agency popularly known as Shin Bet, to sit for rare interviews on the record.

They candidly discuss their terms from 1980 to 2011 leading Israel’s war on terrorism, against both Palestinian and Jewish terrorists. What’s shocking is that all six men, individually and collectively, have moved on beyond the rigid hard-line stances that they once implemented. Arguing that the current apartheid-like occupation is unsustainable, they favor reconciliation via a peace process resulting in a two-state solution.

The filmmaker’s unprecedented access started with Ami Ayalon, a former Shin Bet head and commander-in-chief of the Navy who became a Labor Party member of the Knesset (Israeli Parliament) and a security cabinet member. Ayalon, who helped to round up the other five Shin Bet leaders for the project, declares that, “The tragedy of Israel’s public security debate is that we don’t realize that we face a frustrating situation, in which we win every battle, but we lose the war.” Avi Dichter concurs, insisting, “You can’t make peace using military means.”

After Israel’s overwhelming victory in 1967’s Six-Day War, a million Palestinians in the Gaza Strip, the West Bank and old Jerusalem suddenly became ruled by Israeli military forces. Ex-Shin Bet head Avraham Shalom was blunt about the victory. “When the Arabs surrendered, we had no enemy,” he said, even quipping that the subsequent rise of terrorism “was lucky for us. We had work.”

But he was less flippant when he reluctantly discusses the Bus 300 hijacking in 1984, in which two Palestinian hijackers were caught and executed while in custody, causing an uproar that forced Shalom’s ouster.

Ayalon did not mince words when it came to the incident, angrily proclaiming, “We killed them with their hands tied.”

Shalom, however, echoed the uncompromising mentality that drove many of the former Shin Bet leaders: In war, take no prisoners.

“With terrorists there are no morals. In the war against terror, forget about morality,” Shalom says in the film. Yet he also describes the Israeli security presence in the occupied territories as “a brutal occupation force similar to the Germans in World War II.”

Thus, all six men have renounced the agency’s tactics in the Israeli-Palestinian conflict — tactics that clearly haunt them. Yaakov Peri observes, “You knock on doors in the middle of the night; these moments end up etched deep inside you. When you retire, you become a bit of a leftist.”

Indeed, they now all advocate for a peace process that, after decades of vicious fighting that they helped to wage, may itself be dead. As Carmi Gillon, who resigned from the Shin Bet after the assassination of Yitzhak Rabin, reflects, “We are making the lives of millions unbearable, into prolonged human suffering; it kills me.”

Thumbs Up for ‘No’ 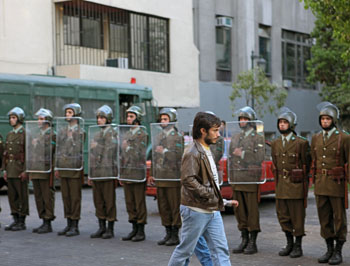 Gael García Bernal plays an ad exec during the rule of Chilean dictator Augusto Pinochet in “No.”

In 1988, Chilean strongman Pinochet has governed for 15 years following the military coup against the country’s freely elected president, Salvador Allende. Succumbing to international pressure, amongst other reasons, Pinochet agrees to a national plebiscite that will determine whether his rule will continue for another six years. For a month before the election on Oct. 5, 1988, in which voters can cast ballots for either “Yes” or “No,” each side is guaranteed 15 minutes of national television time each night. The “No” side is assigned the decidedly non-prime time slot of midnight to 12:15 a.m.

José Tomás Urrutia (Luis Gnecco), a leader in the fragmented opposition, unexpectedly taps ad exec René Saavedra (Bernal) to lead the “No” campaign against the entrenched incumbent, surprising René and everyone around him. A young Turk sporting sneakers and longish hair, René is decidedly indifferent to politics despite being raised abroad as the child of a political exile.

Cinematographer Sergio Armstrong photographs the whole movie on a low-fidelity ’80s-era U-matic video camera to cleverly evoke the appearance of that decade, which also facilitates the relatively seamless insertion of murky archival footage, including real election commercials. The aesthetic gamble works for those audience members willing to forgive the film’s inherent lack of production values.

No
(Spanish with English subtitles; 110 min.)
Landmark’s E Street Cinema
4.5 out of 5 stars 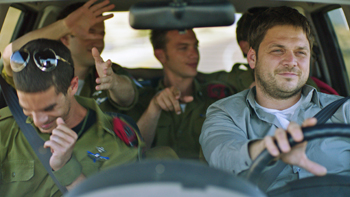 With “Yossi,” popular Israeli director Eytan Fox (“Walk on Water,” “The Bubble”) successfully follows up his 2002 audience favorite “Yossi & Jagger,” in which Israeli commander Yossi Hoffman loses his secret gay lover, a fellow soldier, who is killed in combat while they execute an attack against Lebanon. In “Yossi,” another crowd-pleasing romantic drama, Itay Segal’s mature script intelligently plots what has changed — and what has not — after 10 years.

Lead actor Ohad Knoller skillfully reprises his role as Yossi from “Yossi & Jagger,” delivering a poignant performance as the long-suffering, closeted homosexual who finally rekindles an appreciation for life. Oz Zehavi’s flashy turn as Yossi’s new love interest Tom is not as rich, but he gets the job done depicting a somewhat stock pretty boy.

In “Yossi,” the eponymous character (Knoller) has achieved professional success in civilian life as a respected cardiologist. In his personal life, he lives a lonely existence, never having recovered from the loss of his lover. Living by himself, he maintains a distance from his friends, thwarting their well-intentioned attempts to help him. A female nurse (Ola Schur-Selektar) falls for him and makes a pass. A newly divorced male colleague (Lior Ashkenazi of “Walk on Water”) drags him to a drug-fueled party and tries to set him up in a threesome with a woman. In a random meeting, one of Yossi’s patients (Orly Silbersatz Banai) ends up being the still-grieving mother of his late lover, bringing to the surface his continual public suppression of their relationship, which he reveals to her.

Concluding he desperately needs a vacation, Yossi departs for the seaside resort town of Eilat. During his journey, he encounters four soldiers on leave who’ve missed their bus and offers them a ride. One of the soldiers is good-looking, confident Tom (Zehavi), whose open gayness startlingly contrasts with Yossi’s still-closeted life. Reflecting changes over the last 10 years in Israeli society, particularly in Tel Aviv, Tom’s out sexuality is treated with indifference by his macho fellow soldiers, surprising Yossi even more.

Such casual acceptance of homosexuality in the army was unheard of during Yossi’s own military service. Yossi gradually finds such openness liberating. Unlike his fellow soldiers, Tom recognizes that Yossi is gay and casually hits on the older man, a persistence that gradually pays off. As Yossi’s frozen emotional reserve melts over time, he eventually succumbs to Tom’s advances and rediscovers how to be happy.


The Freer Gallery of Art, the AFI Silver Theatre and the Angelika Film Center Mosaic, with support of the Korean Cultural Center DC and the Embassy of the Republic of Korea, present the “2013 Korean Film Festival DC” (March 1-April 21).

D.W. Griffith’s “Intolerance” (Sat., March 9, 3 p.m.), a silent feature with live accompaniment by the Bolster ensemble, is screened in association with the Sackler exhibition of the Cyrus Cylinder.


Organized in partnership with the Francophonie DC Cultural Festival, with gratitude to the Embassy of Belgium, the program “Responsible Realism: Belgium’s Dardenne Brothers” screens “Rosetta” (Sat., March 2, 2 p.m.) and “The Son” (Sat., March 2, 4:30 p.m.). The afternoon is introduced by Philip Mosley, author of “The Cinema of the Dardenne Brothers: Responsible Realism,” who will sign his book in between screenings.