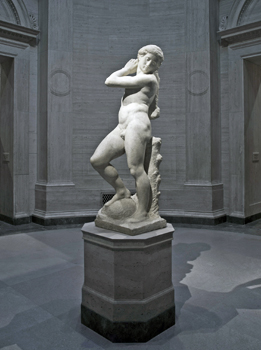 Michelangelo’s “David-Apollo,” on display at the National Gallery of Art until March 3, was the inaugural kickoff event for “2013 – The Year of Italian Culture in the United States,” a massive program showcasing the best of Italian arts and culture in some 70 U.S. museums and cultural institutions.

Rome has declared 2013 to be “The Year of Italian Culture,” but its embassy in Washington understands that simply coining the phrase will not give the year cultural imprimatur among Americans. So the Italian Embassy is busy coordinating a cultural charm offensive that is unfolding across the United States, from art exhibitions in Boston to robotics demonstrations in San Francisco.

The Italian term for this charm offensive is sistema paese, roughly translated as “the country as a whole,” or “the country seen systematically.” It is the belief that Italian culture should be presented holistically rather than in isolation. The goal is to showcase the breadth of the culture, from Michelangelo to modern science. “The idea is not to have a single, specific event, but events as a trampoline for cooperation,” between the United States and Italy, Antonio Bartoli, head of the Italian Embassy’s cultural office, told The Washington Diplomat recently.

Just two years ago, the Italians had a similar cultural blitz in honor of the 150th anniversary of the country’s unification (also see “Venetian Views: Canaletto and Company Capture Landmark City on the Water” and “Philip Guston: A ‘Roma’ Retreat at the Phillips Collection” in the April 2011 issue of The Diplomat). But that initiative was more nostalgic, highlighting Renaissance art and other things one reflexively associates with Italian culture.

“We don’t want to stop there,” Bartoli said. “We want to hold an initiative capable of generating stable and durable cooperation.” Ambassador Claudio Bisogniero was equally ambitious in his official statement, saying, “No area of achievement will go unexplored.”

Practically no area of the United States will go untouched, either, with more than 180 events taking place in some 70 U.S. museums and cultural institutions in more than 40 major cities, including Boston, Chicago, Detroit, Houston, Los Angeles, Miami, New York, Philadelphia, San Francisco, and of course Washington, D.C. The yearlong series of programs will showcase Italian research, discovery and innovation in the realms of art, music, theater, cinema, literature, science, design, fashion and cuisine. 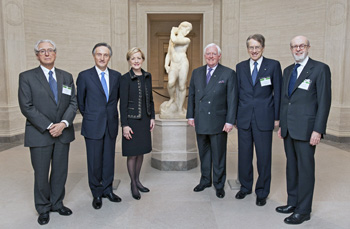 The extravaganza kicked off at the National Gallery of Art in December with an iconic symbol of Italian culture: Michelangelo’s “David-Apollo” — not the famous David (that sculpture is housed at the Accademia Gallery in Florence), but an uncompleted work that comes with its own history of political intrigue. Michelangelo sculpted “David-Apollo” as a peace offering to the Medicis after siding with the republicans during an uprising against the powerful family, whose reign helped give birth to the Italian Renaissance (also see “‘David’ Returns to D.C.” in the February 2013 Diplomatic Pouch online).

Michelangelo and the Medicis are synonymous with Italian heritage, but for “The Year of Italian Culture,” guided by sistema paese, the embassy would like to show the “more dynamic and modern facet of the country,” Bartoli said. This means, among other things, a greater emphasis on science and technology. (The Italian Renaissance was, of course, a rebirth of science and discovery, as well as a rebirth of art).

Italian cooperation with NASA (the U.S. National Aeronautics and Space Administration) stretches back 50 years, when NASA agreed to launch the first Italian satellite into space, and a March event in Washington will commemorate this enduring partnership.

Another symposium, also in March, will be dedicated to famed Italian writer, diplomat and philosopher Niccolò Machiavelli on the 500th anniversary of his political treatise “The Prince.” An upcoming theater performance by Massimiliano Finazzer Flory at the Kennedy Center will shed light on another historic Italian figure, of sorts: Pinocchio. But “Pinocchio: The Story of a Puppet” is more than just a children’s fairytale. Combining literature, theater, dance and music, the show examines the adult themes in Carlo Collodi’s original book, an allegorical tale of freedom and obedience centered around the tragic figure of Geppetto.

Other scheduled events include a display of Leonardo da Vinci’s “Codex on the Flight of Birds” at the National Air and Space Museum in May and a multimedia exhibit in December at the Library of Congress on Martin Waldseemüller’s 1507 world map (the first to feature “America”) and the contributions Italian explorer Amerigo Vespucci made to the discovery of the New World.

The embassy is also helping to promote related events in Washington, such as a new international design festival called “The Next Wave: Industrial Design Innovation in the 21st Century,” which will feature Italian designer Roberto Palomba, among others. The impetus behind many of these events is to highlight a legacy of achievement that has endured and evolved over time. 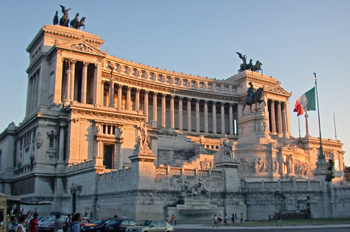 The The National Monument of Vittorio Emanuele II, the first king of a unified Italy, is one of Rome’s top landmarks. The government in Rome has declared 2013 to be “The Year of Italian Culture in the United States,” which will bring more than 180 events to 40 major U.S. cities.

Another example of this sistema paese approach to cultural diplomacy is an art campaign the embassy is carrying out on Washington buses and in Metro stations. The work of 12 contemporary Italian photographers will adorn the sides of District buses and be framed by verses from Italy’s most famous poets, Bartoli said. After racking up miles across the city, the exhibit will move indoors to the Phillips Collection. This year’s host of the Phillips Gala? You guessed it, Italian Ambassador Bisogniero and his wife Laura, who are lending their names to a string of high-profile charitable and social events this spring (see related story).

We asked Bartoli where the money for this expansive cultural campaign comes from. It is no secret that Rome is on a tight budget after the country nearly went bankrupt in 2011. To overcome shrinking public funding, the Italian Foreign Ministry and its embassies around the world are looking to “involve the private sector in a new model of public-private partnership,” Bartoli said. That is why many of the cultural events have corporate sponsors. It is a creative way to keep the Italian cultural flag at full mast while the government at home struggles to pay its bills.

Two of the main corporate sponsors are oil and gas company Eni and Intesa Sanpaolo banking group. Representatives from both companies have been on hand for a series of lavish debut events in Washington, along with a high-powered roster of Italian-Americans, including Supreme Court Justice Antonin Scalia and House Minority Leader Nancy Pelosi (D-Calif.).

Bartoli said that Italian-Americans, which he estimates number 18 million, are an easy link between the two countries and are actively involved in planning major Italian events in the United States.

Bartoli sums up “The Year of Italian Culture” in amicable terms: It is a “gesture of friendship and attention toward the United States,” which is “a strong friend [of Italy] in terms of institutions, but also people-to-people relations,” he said.

For more information on “2013 – The Year of Italian Culture,” please visit www.italyinus2013.org.

Sean Lyngaas is a freelance writer in Washington, D.C.