Dulles International Airport (IAD), which celebrated its 50th anniversary last year, expects to serve a record 24 million passengers in 2013 — driven in part by a business and investment boom in the oil-rich Persian Gulf that shows no sign of slowing down.

Just over 26 percent of the airport’s traffic is international traffic — a ratio exceeded in the United States only by New York’s JFK and Miami International Airport. Dulles, located in Northern Virginia, now ranks as the nation’s 10th-busiest airport, said Chris Browne, vice president and airport manager for Dulles.

And if its master plan comes to pass, IAD could one day accommodate up to 70 million passengers a year — making it a “crown jewel” for economic development across the national capital region.

“We’ve seen many new airlines begin service in 2012,” Browne said. “Emirates, Aeroméxico, Porter Airlines and Sun Air all came to Dulles last year. Etihad Airways will begin daily service in 2013. There was also an increase in international routes served by United, the airline with the largest presence at the airport.

The roof and skylights of the recently completed International Arrivals Building stands in front of the main terminal of Dulles International Airport, which expects to serve a record 24 million passengers in 2013.

“We already have Saudi [Arabian Airlines], Qatar Airways, Turkish [Airlines], United — flying to Kuwait and Doha — and now Etihad. We have some of the most robust service into the Middle East out of any airport in North America,” Browne told The Washington Diplomat.

“Some very large hub airports are being built out there — for instance Abu Dhabi,” he added. “We’re also finding that a lot of North American traffic to India and points beyond are connecting just as readily through these Middle East hubs that are served by our airport as through [traditional] European hubs like London or Paris.”

Abu Dhabi International Airport (AUH), home base of Etihad, is undergoing a $3.2 billion expansion that includes a giant 700,000-square-meter terminal building with 18,000 square meters of duty-free shopping alone. When finished in 2017, AUH will be capable of handling 65 jets simultaneously. At that point, Abu Dhabi — capital of the United Arab Emirates — will have an airport that can receive 30 million passengers a year, rising to 47 million by 2030.

Likewise, Dubai International Airport (DXB) is moving ahead with a $7.8 billion expansion plan that could boost traffic to 90 million passengers a year by 2018 — up from 60 million today — making DXB the largest Airbus A380-specific terminal infrastructure in the world, according to an airport press release.

Not to be outdone, the wealthy emirate of Qatar is building a new airport in the desert to accommodate the rapid growth of its state-owned airline, Qatar Airways. Hamad International Airport will open later this year at a cost of $15.5 billion. Qatar Airways Chief Executive Officer Akbar Al Baker said that, “2013 is an historic year for the State of Qatar, Qatar Airways and the country’s young aviation industry.”

The airline also recently marked another milestone: the five-year anniversary of its service to Dulles.

Etihad, the national airline of the United Arab Emirates, will start its daily nonstop service linking Dulles and Abu Dhabi on March 31. In late January, the airline offered a peek at one of its brand-new B777 aircraft when the gleaming new jet stopped at Dulles on its maiden voyage from the Boeing factory in Everett, Wash.

“The Washington metropolitan region represents a wide geographical spread and strong economy,” said Daniel Barranger, Etihad’s vice president for global sales. “This route is vital to supporting our ongoing growth in the United States and the increasing ties between the U.S. and the United Arab Emirates.”

Indeed, despite its relative smallness, the UAE consistently ranks as America’s top export partner in the Arab world. Last year, the South Carolina-size nation of 7.9 million people imported $22.57 billion in goods from the United States — a 41.9 percent jump over 2011 figures.

At Etihad’s Jan. 24 event, a team of more than 25 cabin crew was on hand to escort the exclusive audience of diplomats, government officials and business executives for a tour of the airline’s B777.

“Our offering today is the result of tireless and constant innovation and significant investment,” said Aubrey Tiedt, Etihad’s vice president of guest services. “In creating our guest experience, we look outside the regular parameters of the airline industry, benchmarking instead against the leading hotels and restaurants of the world. This means we have a completely different approach to onboard service. Our staff is trained to be hospitality experts. But more than this, they understand that caring for each individual is fundamental to differentiating our guest experience — on the ground and in the air.”

Etihad’s biggest UAE competitor, Emirates, has been flying the Washington-Dubai route since Sept. 12, when it made Dulles its seventh U.S. gateway. Passengers on that route fly on a Boeing 777-200 LR that features, among other amenities, private suites in first class; lie-flat beds in business class; SMS, telephone and email service at every seat; and 1,400 channels of in-flight entertainment. 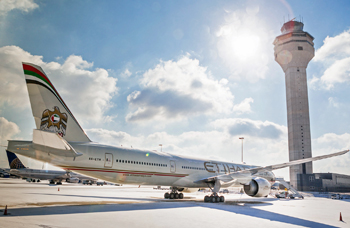 Etihad, the national airline of the United Arab Emirates, will start its daily nonstop service linking Dulles and Abu Dhabi on March 31. Above, its state-of-the-art, brand new Boeing B777 aircraft was showcased during a January event.

One of the world’s fastest-growing airlines, Emirates continues to be profitable, despite unstable global economic conditions. In the first half of fiscal 2013, net profit came to $464 million, up 104 percent from the $228 million in the year-earlier period. Total revenues came to $9.7 billion, up 17 percent from the $8.2 billion a year earlier.

Dulles International Airport, inaugurated in 1962 and named after former Secretary of State John Foster Dulles, saw 327,493 takeoffs and landings in 2011 — up from the roughly 8,000 in its first year of operations. In 2011, IAD served nearly 6.5 million international passengers, a number that has consistently gone up over the years.

“Yields on international fares are higher than those on domestic fares, and yields that airlines generate out of this market tend to do quite well because of our high business volume,” said IAD’s Browne. “Most of the business-class flights out of here are full.”

Today, the longest-haul flight out of IAD is All Nippon Airways’ nonstop to Tokyo, a journey of nearly 14 hours. (The shortest is Sun Air’s 40-minute jaunt to Hagerstown, Md., aboard a nine-passenger Piper Chieftain commuter plane.)

Among other things, Dulles claims to be the nation’s first airport to display real-time security-line waits in the terminal and online. It also boasts a new, modern underground Aerotrain system connecting airport concourse gates to the main terminal building, part of an ongoing series of renovations and updates to the sprawling facility.

To add to the international arrivals experience, IAD also employs a contingent of college-age “student ambassadors” — 90 percent of whom speak multiple languages — who greet and assist arriving travelers.

Browne said Dulles is well versed in catering to the special needs of diplomats.

“We do over 1,000 VIP movements per year. Most of those are through the State Department — foreign dignitaries, heads of state, ambassador-designates and so forth,” he said. “We also have standalone screening facilities in the event an arriving party has some security requirements.”

While the Middle East is crucial to IAD’s bottom line, the airport is not totally dependent on that region for revenues.

This new wide-body aircraft provides service six days a week (excluding Tuesdays) and will increase capacity on this route by 6.3 percent. The 747-8 is equipped with 362 seats in a three-class configuration, redesigned wings with improved aerodynamics, as well as fuel-efficient engines that contribute to a reduction in fuel burn, emissions and noise.

“We want to thank Lufthansa for selecting Dulles for the honor of receiving the very first commercial flight of a Boeing 747-8 Intercontinental anywhere in the world,” said John E. Potter, president and CEO of the Metropolitan Washington Airports Authority, which was established in 1987 to manage and operate Dulles as well as Ronald Reagan National Airport.

“As the international gateway to our nation’s capital, Dulles has been honored to remain on the cutting edge of new aircraft technology since its opening 50 years ago. We congratulate Lufthansa on the debut of this impressive new aircraft and thank them for serving Dulles as the launch market from their Frankfurt hub.”

Boeing has had far less success with its 787 Dreamliner, a mid-size, wide-body jet billed as the company’s most fuel-efficient aircraft ever. But in January, the Federal Aviation Administration ordered all U.S.-based airlines to ground their 787s following several incidents involving the aircraft’s lithium-ion batteries catching fire while in flight.

Browne said his airport has been unaffected by Boeing’s latest headache.

“Ethiopian Airlines was the only carrier thus far operating the Dreamliner into Dulles, and they have substituted a 777-300 instead while the Dreamliner is undergoing continued investigation,” he said. “So we haven’t lost any service as a result of the grounding of the 787.”

Browne said yet another important milestone will be achieved in 2018, with completion of the Silver Line extension of the Metrorail system into Virginia’s Loudoun County. Construction of the 23-mile Silver Line — expected to cost $5.6 billion — is being funded by a combination of Dulles Toll Road revenues and airport contributions, as well as federal, state and local government appropriations.

“I think it’s going to be very significant on a couple of fronts,” Browne said. “It connects us to the entire Metro network throughout the region, providing other options to get to the airport. We’ve also got over 18,000 employees, so I expect we’ll see a lot of them choose to use it, though it might not be a choice that meets the needs of business people who arrive by taxi. Overall, it will make Dulles more accessible to users.”