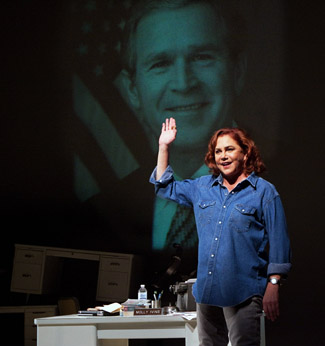 What could be timelier than staging a fictional evening with a political pontificator during a highly charged presidential race?

That’s what Arena Stage is doing with the D.C. premiere of “Red Hot Patriot: The Kick-Ass Wit of Molly Ivins,” a one-woman show about the late, great Molly Ivins. The spirit of the outspoken Texas liberal, whose no-holds-barred writing made her an icon of political journalism, lives on — loud and proud — in the intimate Kogod Cradle, Arena’s space for new plays. Inhabiting the larger-than-life Ivins is none other than iconic screen and stage actress Kathleen Turner, whose identification with the character and command of the stage does Ivins justice.

Ivins, a syndicated columnist, used satirical humor and irony to deliver her populist broadsides against politicians and skewer her home state of Texas. She earned praise and scorn for such antics as nicknaming former President George W. Bush “Shrub” and quipping that Pat Buchanan’s screed against liberals, abortions rights and gays at the 1992 Republican convention “probably sounded better in the original German.”

A female pioneer who pushed the political envelope and professional glass ceiling, hers was a time when newsrooms were white and male, social justice issues were on fire, and writers banged away on manual typewriters and kept a pack of Marlboros and a flask handy. Ivins’s colorful jabs at Republicans and what she deemed social injustices graced the pages of the large Texas papers, the New York Times and two bestselling books: “Shrub: The Short but Happy Political Life of George W. Bush” and “Bushwhacked.”

Unfortunately, her spirited life was cut short at the age of 62 after battling breast cancer.

Although “Red Hot Patriot” reads like a tribute to Ivins and preaches to a liberal choir, the script isn’t meant to romanticize Ivins, according to Margaret and Allison Engel, the twin sisters who wrote the play.

“This isn’t a valentine to Molly,” they told The Washington Diplomat, stressing that Ivins wasn’t perfect. “It’s a description of a complicated, interesting life, not a star-struck portrait of her. People who don’t know a lot about her may know her for her funny lines, but she was more than that. She was a serious commentator, a diligent reporter who was interested in a wide array of topics and took on unpopular themes.”

The sisters, former well-known newspaper journalists themselves who also co-authored a series of books on America’s best food, were inspired to write “Red Hot Patriot,” their first play, after attending a conference in which Jane Fonda and Sally Field implored the audience to write theater starring women over the age of 50.

“Despite their renown, Fonda and Field said they are given little theatrical material of value,” wrote the Engels. The sisters said they chose to write about Ivins because “Molly was about five years older than us; we started in journalism a little after her, and we admired and followed her writing for 15 years.” 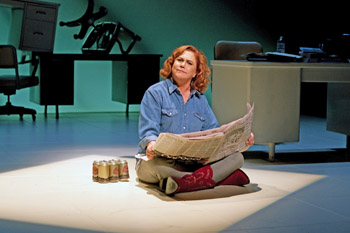 Their script leaped from page to stage virtually overnight, a success that the Engels attribute to karma. They knew someone who presented the script to Kathleen Turner, who immediately wanted to do it, and one of the sister’s colleagues had a connection to Arena.

“Happy accidents are not the norm. Molly must have orchestrated this from above,” Margaret Engel said.

The script itself is bittersweet. Although filled with laughs, it chronicles Ivins’s strengths and vulnerabilities, her joys and painful moments, and reminds us that life, albeit worth fighting for, can at times be unfair and fleeting.

Ironically, it starts with Ivins struggling to write an obituary of sorts about her conservative, authoritarian father, but the play ends up being her own eulogy. The script chronicles Ivins’s life, using her own storytelling, an overhead projector for visuals, and the help of an ancient AP teletype that coughs up focal articles that Ivins has written over the years. After she loses her battle with breast cancer, Molly’s “office” — an old desk with a manual typewriter and a sculpture of an armadillo — joins an office graveyard, thrown into a heap of upturned, discarded desks and chairs arranged upstage as part of John Arnone’s simplistically potent set.

In addition to its witty and well-researched script, the success of this production hinges on Turner’s touching and realistic performance, as well as David Esbjornson’s direction.

It is to her credit that Turner’s long-ago movie debut as a young temptress in “Body Heat” and this fiery, middle-age journalist have nothing but passion in common. Turner transforms into Ivins — Texas drawl, red cowboy boots and all.

Esbjornson directed the 2010 world premiere of “Red Hot Patriot,” also starring Turner, with the Philadelphia Theatre Company and is known for directing major Broadway premieres, including Edward Albee’s “The Goat, or Who is Sylvia?” and Alfred Uhry’s “Driving Miss Daisy.”

Another major appeal of the play, perhaps, is that it is about a prominent female. Regrettably, in the same way Ivins was uncommon — a liberal in oil country, a woman in a man’s world — so are biographies of women in the theater world. They exist, but are far and few between.

“If stage audiences can spend thousands of nights with Mark Twain and Will Rogers over the years, why not with Molly?” asked the Engels.

After all, like Ivins and the Engel sisters, audiences enjoy a good fight for the right cause now and again.