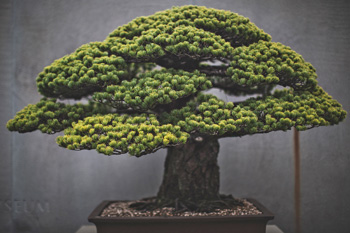 In the hectic, workaday world of Washington, D.C., photographer Stephen Voss often works at breakneck speed taking portraits of politicians, so he sought out a more contemplative place among the gentle curves and gnarled limbs of bonsai.

“In D.C., when you photograph people, you are told you have 30 minutes with them, and when they walk in the door you have two minutes,” he said. “There’s not a lot of time to experiment or take risks.”

The white pine, also known as the Yamaki pine, was one of the original 53 trees gifted from Japan to the U.S. in 1976; it wasn’t known until later that this tree survived the atomic bombing of Hiroshima in World War II.

After spending a year photographing bonsai at the National Bonsai & Penjing Museum in the U.S. National Arboretum, Voss published a photo book called “In Training” and exhibited his photos at the Arboretum in May during a bonsai festival. Another photo exhibition will be on display until Sept. 9 at the Japan Information and Culture Center.

The photo exhibition is just one event celebrating the 40th anniversary of the National Bonsai & Penjing Museum, which opened in 1976 with the donation of 53 bonsai trees from Japan to commemorate the U.S. bicentennial. On Oct. 15, an autumn festival will celebrate the renovation of the Japanese Pavilion with family activities, Japanese food trucks and demonstrations by a bonsai master. A ticketed moonlight viewing will include haiku readings and performances by Japanese musicians on a traditional stringed instrument called the koto.

The Japanese Pavilion houses the museum’s collection of Japanese bonsai, including a 390-year-old Japanese white pine tree that survived the atomic bomb explosion at Hiroshima. “It’s become very symbolic of the peaceful relationship between Japan and the United States and a symbol of peace around the world,” said Johann Klodzen, executive director of the National Bonsai Foundation, which raised $3 million mostly from individual donations to fund the pavilion’s renovation.

Designed by acclaimed Japanese garden designer Hoichi Kurisu, the Japanese Pavilion will feature bonsai in both formal and informal settings and atop granite boulders shipped from North Carolina and Washington state. Special showings of the bonsai when they are awash in fall colors will be held from Oct. 28 to Nov. 15. The events are cosponsored by the National Bonsai Foundation, Embassy of Japan, Japan-America Society and Japan Information and Culture Center.

The centuries-old Japanese tradition of bonsai, or tray planting pronounced “bone-sigh,” descended from a similar Chinese art form called penjing. The trees are “in training” for decades or centuries and are passed down through an unbroken chain of bonsai masters who care for the trees through careful pruning, grafting and watering in shallow pots that restrict the trees’ root structure. Bonsai can be developed from numerous species, including Japanese maple, ginkgo, beech and sweetgum trees. In the United States, bonsai often represent regional distinctions, with juniper bonsai popular in California and cypress in the South where they are commonly found in swamps. 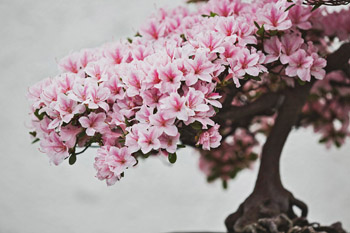 Among Steven Voss’s photographs of Japanese bonsai are a 34-year-old rhododendron, at left, as well as a white pine bonsai started in 1625.

After World War II, bonsai became popular in the United States when American soldiers who had seen the miniature trees returned home from Japan. Japanese Americans also helped spread the tradition. Bonsai are traditionally shown in homes and gardens in Japan, and the National Bonsai & Penjing Museum was the first bonsai museum in the world when it opened in 1976.

“For a growing audience, there’s just an appreciation of the art form and the beauty of growing lovely, handsome trees in small pots,” Klodzen said.

Voss knew very little about bonsai before his first trip to the Arboretum on a whim turned into a yearlong journey during which he spent hours photographing one bonsai at a time, seeking to capture the spirit of the trees with close-ups of their knotted trunks and changing leaves. “It was really peaceful and quiet and beautiful there,” said Voss, whose photos have appeared in Vanity Fair, Time, the Atlantic and elsewhere. “I would be there for three or four hours at a time in the winter and not see another person.”

His photos feature the crooked, barren limbs of a Chinese elm, the delicate pink blooms of a rhododendron, and the bushy green needles and bone-white trunk of a Sargent juniper in training since 1905. Voss’s favorite bonsai is called Goshin, one of the most famous bonsai in the world that was donated to the museum by Japanese American bonsai master John Yoshio Naka, who died in 2004. The painstakingly arranged collection of 11 Foemina junipers creates a miniature forest in a single shallow tray, with each tree representing one of Naka’s grandchildren. The museum’s North American Pavilion is named after him.

“I love the philosophy of bonsai and the meaning and spirit behind these trees,” Voss said. “I think there’s something really profound about standing in front of these trees and thinking how long they have lived and how they have passed through generations of bonsai masters.”