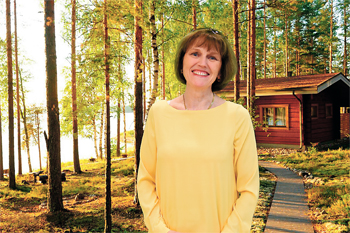 Living through a home renovation is never easy. Dust and noise seep into every room every day. Sometimes there is no water, no electricity and therefore no air conditioning or heat. Mistakes and delays are part of the job. But most architects and interior designers don’t sleep inside their projects.

Agnes O’Hare does. The wife of European Union Ambassador David O’Sullivan, O’Hare is an architect and interior designer who has taken on the job of remodeling the salmon-colored EU Residence in the tony Kalorama neighborhood.

Agnes O’Hare, an architect and interior designer who is married to European Union Ambassador David O’Sullivan, poses against the backdrop of a Finnish summer house at this year’s EU Open House showcase.

“You get used to [the disruption],” she told us. “You realize you have to adjust. When you renovate, you never know what you’ll find. We didn’t find a fortune or a skeleton — just a wasp nest.”

The house was built in 1922 and initially renovated in 1996. “The major renovations we are doing are the heating and air conditioning systems, combining the breakfast room with the kitchen and changing all the bathrooms,” O’Hare explained as she expertly strolled through the construction site, noting where walls used to be located. “We need all this when we are hosting a big event,” she said, pointing out the family kitchen, which is just around the corner from the main catering kitchen.

The elegant residence off Belmont Road, NW, is a far cry from her more down-to-earth digs growing up in Ireland. “I grew up on a dairy farm,” O’Hare said. “It was a horse farm, too. We were five girls and two boys and our life was pleasant and exciting. We were very close as a family even though we all went away to boarding school.”

O’Hare studied interior design in Dublin before moving to Melbourne, Australia. “I had read ‘The Thorn Birds,'” she laughed as she recalled the bestselling novel about a fictional sheep station in the Australian Outback named after an Irish town. “Even as a child I enjoyed reading…. The Irish have a history of immigrating to Australia, New Zealand and the U.S.”

Perhaps it’s only fitting then that O’Hare met her Irish husband far from home — in Tokyo, of all places. She and a friend from New Zealand were on a four-month backpacking excursion making their way back from Australia, where she had spent the last four years working as an interior designer. They traveled extensively throughout Asia: Hong Kong, Indonesia, Singapore, Japan, Thailand, Burma, India and Nepal, with side trips to Turkey, Greece and what was then Yugoslavia.

Meanwhile, David O’Sullivan, a longtime European diplomat, was in Japan’s capital city serving as first secretary in the Delegation of the Economic Commission, the precursor to the EU. The two had originally met back in their native Ireland. “In Tokyo, we stayed in his apartment for two or three nights. We clicked right away but I continued on my journey back to Ireland. Several months later, I went back to visit. We had been corresponding,” O’Hare recalled.

“We were married in a side chapel of Saint Sophia Cathedral in Tokyo by an Indian Jesuit. I loved Tokyo. I had no Japanese, so I worked in the Berlitz School teaching English to Japanese groups.”

O’Hare eventually began working for the Japanese engineering and architectural firm Nikken Sekkei. “It was massive: 800 architects and engineers. I worked in the interior design department on the designs for Cairo’s Opera House. It had burned down. We worked on Islamic designs for furniture and this needed careful research.”

When the couple returned to Brussels, the headquarters of the European Commission, O’Hare decided to formally study architecture. “I was less satisfied with being an interior designer because people linked it to interior decoration,” she explained.

She chose L’École de la Cambre, a renowned architecture and visual arts school, and began studying in French, which was “very difficult, especially the French architectural terms. I had only my school French from Ireland. I had to learn an entire technical vocabulary in another language. For example, a ‘beam’ in English is ‘une poutre’ in French and a ‘carpet’ is a ‘tapis.’ Only a few French words used in architecture, like ‘cuisine,’ which means ‘kitchen,’ are easy to guess.”

Eventually, O’Hare set up her own architectural practice, which she has managed for the last 25 years. The business, based out of Brussels, specializes in domestic architecture. “I am winding down my business. It still exists. I work on computer, FaceTime and phone. It works well once I remember the time difference. I can reach all my tradesman and clients this way.”

Brussels has been the couple’s home away from home for decades. Prior to his posting to D.C., O’Sullivan served as chief operating officer of the European External Action Service and was responsible for establishing this new EU diplomatic service. Although the ambassador began in the Irish Foreign Service, he has spent most of his career in the European Commission, now the executive arm of the EU. Because of that, the family spent most of their time in Brussels. That includes the couple’s two children, who were born and raised in Belgium. 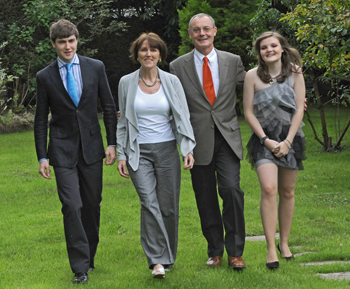 Agnes O’Hare and her husband, European Union Ambassador David O’Sullivan, are pictured with their son Shane, who is training to become an anesthesiologist, and Kate, who recently completed her law degree at Georgetown.

Both children returned to Ireland, however, to study at O’Sullivan’s alma mater, Trinity College in Dublin, for their undergraduate degrees. Their son Shane, 25, is now in his third year of consultancy training in anesthesiology. Kate, 22, recently completed her law degree here at Georgetown University.

While in D.C., O’Hare follows up with her European clients, supervises the renovation of the residence and finds time to volunteer at the Veterans Medical Center on Irving Street, NW. “I have a good friend who knew I wanted to do some worthwhile volunteering. She introduced me to the Veterans Medical Center where I work in the outpatient pharmacy … handing out prescriptions. I am the kind of person who needs to keep busy,” she said. “If you can help, I think you should.”

Otherwise, she enjoys what doing what she’s done her whole life: exploring. “It is extremely exciting to be here. America is extraordinary. I love to travel…. It’s fascinating to meet new people,” said O’Hare, whose husband went to grade school in California and has also traveled extensively throughout the United States.

“The U.S. and Ireland have a lot in common,” O’Hare said. “The White House was designed by Irish architect James Hoban, you had President [John F.] Kennedy and his family with strong Irish connections, you have Irish music and dance, and Irish names wherever you go.”

The links run deep between Americans and the Irish, who immigrated to the U.S. in large waves in the 1800s and exerted their influence on the political system. Recently, O’Hare observed the U.S. election system firsthand when she attended the Democratic and Republican National Conventions over the summer.

“I thought the conventions were fascinating — the rhetoric, the carnival atmosphere in the street,” she said. “I love [the TV show] ‘The West Wing.’ Seeing the White House is like seeing ‘The West Wing’ become reality.”

While she has a natural affinity for the U.S. and, of course, her native Ireland, O’Hare also feels a strong connection to the city where she raised a family and grew her business.

“Ireland will always be home, but we have lived a full and happy life in Brussels for over 30 years.”