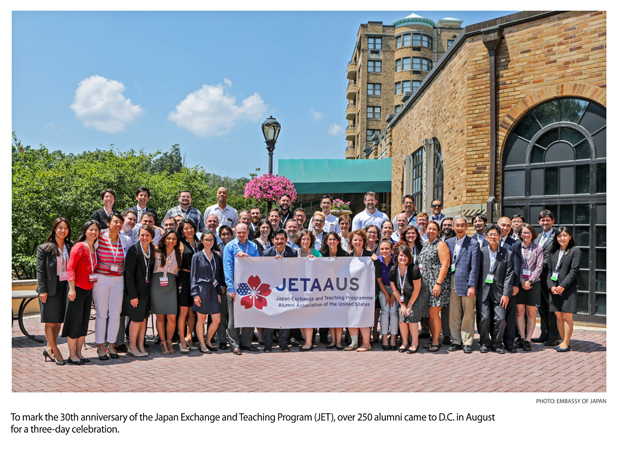 A cross-cultural exchange allows for a better understanding of foreign cultures through education and immersion. For 30 years, the Japan Exchange and Teaching Program (JET) has been able to achieve just that by bringing in more than 60,000 foreigners — including 32,000 Americans — to live, work and teach in schools and government offices throughout Japan.

What began as an English fellows program in Japan’s Ministry of Education in the 1980s evolved into an expansive effort to bring foreigners from 40 nations to work in Japanese cities, towns and villages, helping Japan foster stronger and more resilient relations with countries worldwide.

“JET participants have brought the outside world to schools and communities all over Japan and have touched the lives of millions of people,” former Japanese Ambassador to Peru Masahiro Fukukawa said in an email to The Diplomat.

To mark the program’s anniversary, over 250 JET alumni came to D.C. in August for a three-day celebration that included a reception at the Japanese Residence. At the reunion, 46 of the 47 Japanese prefectures were represented, and attendees spanned every year of the program since 1987.

“Since 1987, JET has been the premier people-to-people program between the United States and Japan,” said William F. Hagerty IV, the recently arrived U.S. ambassador to Japan, in a statement.

“Nearly 32,000 American JET program participants have contributed tremendously to strengthening the U.S.-Japan relationship, which is the cornerstone of peace and stability in the Asia-Pacific region,” he said. “JET alumni have integrated into communities, promoted language education, and gained valuable skills and cultural insights through grassroots exchange.”

“The positive feeling that this grassroots exchange fosters between community members and JET participants is an important element of the friendship and cooperation that exists between Japan and the United States,” Fukukawa added.

With its global reach, the JET Program is one of Japan’s most recognized cultural ambassadors. Participants immerse themselves in Japanese culture while gaining tangible skills in areas such as public speaking and team management, said Fukukawa, now an advisor for the Council of Local Authorities for International Relations (CLAIR), which partners with JET.

Through this program, participants serve in public and private schools across Japan as assistant language teachers, helping students learn English; some also work as interpreters and translators.

The program is highly competitive. Typically, 4,000 to 5,000 applicants apply from the U.S. and approximately 1,000 are selected. Contracts last one year, with participants working roughly 35 hours a week. After the contract is up, many stay for an additional two to three years, although participants are limited to a maximum stay of five years. Fukukawa noted that many participants choose to extend their initial one-year contracts, especially after they’ve made connections within their local host communities.

Once participants complete their term, Fukukawa focuses on finding employment for those who decide to remain in Japan. His efforts include developing career fairs and facilitating internship opportunities. 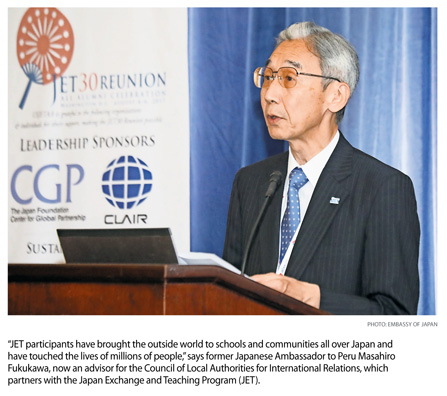 “There are always more international citizens who want to participate than there are open positions,” he said. “The five-year limit allows new participants to come have their own unique experiences and broaden the exposure of Japanese communities to citizens and cultures of the world.”

“As a Pakistani American, my students never knew that someone could be from 2 places,” said Saad, a JET alum who worked in Kagawa for two years, on the group’s website. “When I joined the community in my prefecture, I was ‘adopted’ by two Japanese moms. My ‘J-Moms’ came to visit my family in Michigan. The experience came full circle.”

Alumni of the government-sponsored program return with Japanese language skills that they often use in their work, particularly with international organizations. Alumni have worked in places such as the U.S. State Department, American universities, businesses and nonprofits.

Alumni are also critical to the program’s success and appeal. In the U.S. alone, there are 19 JET Alumni Association (JETAA) chapters. Worldwide, tens of thousands of alumni form an extensive network that helps participants pursue their career paths.

“Alumni are found in diverse fields from business and diplomacy to fine arts and journalism, where they have had both direct and indirect impacts on the U.S.-Japan relationship,” said USJETAA Executive Director Laurel Lukaszewski.

“Their efforts certainly contribute to strengthening the friendship between Japan and the United States,” Fukukawa said.

JET continues to grow and attract a robust group of applicants. Fukukawa said he’s seen demand go up, especially with the 2020 Tokyo Olympic Games. This year specifically, the program has become so popular that approximately 5,200 people will join from 46 countries — that’s 200 more than last year.

Fukukawa joined CLAIR as an executive consultant in 2014. With his background as a former ambassador, Fukukawa works to seek out new recruits. In his overseas trips, he asks Japanese embassies, consulates and JETAA alumni chapters to spread the word about the program.

“JET participants receive a once-in-a-lifetime chance to immerse themselves in a local Japanese community,” Fukukawa said. “They learn to approach challenges from new directions and step up as leaders and independent people.”

Morgan Caplan is an editorial intern for The Washington Diplomat.