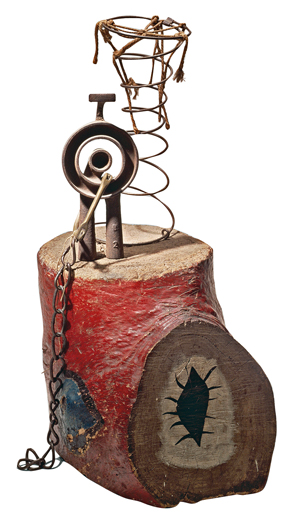 The life and work of the great Spanish artist Joan Miró (1893-1983) is almost swamped in every artistic “ism” of the 20th century — surrealism, magical realism, cubism, primitivism, expressionism, Fauvism, to name a few.

Yet the Barcelona-born painter, sculptor and ceramicist insisted he was a “self-taught amateur” to express his contempt for convention, constantly experimenting and innovating in what he famously described as an “assassination of painting” to upend the establishment.

“Joan Miró: The Ladder of Escape,” the new and comprehensive exhibition at the National Gallery of Art, alongside a smaller exhibition at the Kreeger Museum, showcase Miró’s most fundamental and important “ism”: his humanism.

We see this as he responds to the world around him, both in his travels and amidst the turmoil of the 20th century, all while anchored in the root of his unfailing devotion, his native Catalonia.

Even in all of his sojourns and passionate embraces of modernism’s many guises and genres, Miró never truly escaped the often turbulent and tragic world in which he lived. But he does answer a basic question about modernism and abstraction: How much content can you squeeze into works of art when you’re deconstructing them, while on a mission of “assassinating” art?

Quite a lot, as it turns out in Miró’s case — so much so that the more than 120 works in the National Gallery of Art belt out a siren song that’s impossible to ignore. Miró never leaves content out or behind, though the pieces still coalesce into a singular mosaic of thought and emotion.

Nevertheless, the abstraction can be puzzling — the jarring, brusque lines, whimsical shapes and rich landscapes that carry the weight of metaphor and meaning, the punch of intent and passion.

Miró became known for the fantastical works that resonate in dreamlike fashion on the canvas like children’s music, but he was never merely being playful. There’s always a darker edge to his whimsical, Alexander Calder-like constructions.

“The Ladder of Escape” (a reference to Miró’s retreat to the beautiful, dreamlike works that let him escape from the battles around him) is very much about how the artist related and reacted to the world at large.

And that world was messy, as Miró confronted the often visceral and violent politics that swept across his homeland, from the Spanish Civil War in the 1930s to the decades-long dictatorship of Francisco Franco, not to mention two World Wars. Throughout the upheaval, Miró’s rock was his love of Spain and specifically his native Catalonia, settling in 1940 on the island of Mallorca, where he created some of his most pointed commentary on war. 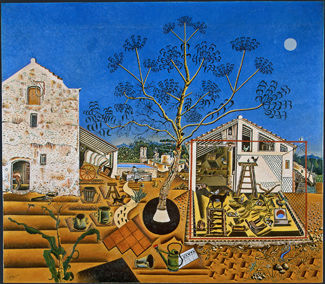 Miró’s father wanted him to be a businessman, but the budding artist recoiled from that prospect to the point of having a nervous breakdown as a teenager. Instead, he spent summers in the coastal Catalan village of Mont-roig, an area that became an early favorite subject for his paintings, which in this period were rich in physical, powerful, emotive detail.

The most famous of these is “The Farm,” a painting that contains of a number of those isms — cubism, abstraction and primitivism. But at its heart, it was a stunningly authentic vision of Miró’s memories. At least that’s what Ernest Hemingway thought. He bought the painting shortly after it was done and wrote of it in typical Hemingway style: “It has in it all you feel about Spain, when you are there, and all that you feel when you are away and cannot go there” — a faint echo of Hemingway’s own paean to Spain in his Spanish Civil War novel “For Whom the Bell Tolls.”

Spain was also the landscape for some of Miró’s most engrossing, powerful works — a confused cauldron of dictators and elected governments on the right and left lashing out against one another and battling for the nation’s soul. The Spanish Civil War attracted fighters to both sides of the conflict, including American liberal spirits like Hemingway, not to mention the Soviet Union, as well as fascists and Nazis from Italy and Germany. The dictators used Spain like a proving ground for new weapons like tanks, and airplanes — witness the near destruction of Guernica. In the end, Franco (and fascism) emerged as more or less the permanent victor of a war that figured strongly in the imagination of artists such as Hemingway, Miró, Federico García Lorca and Pablo Picasso.

In fact, Picasso’s iconic image of Guernica, with its simple, stark lines, has become an enduring image of the conflict. But if you look at Miró’s body of work here, you see the passion of the struggle, its large-scale and wholesale tragedy that are the ghosts in the attic of a generation of Spaniards and certainly Catalans like Miró.

“Telling the story of Miró’s life and the times that he witnessed reveals a dark intensity of many of his works. Behind the engaging innocence of his style lies a profound concern for humanity and a sense of personal identity,” said Earl A. Powell III, director of the National Gallery. 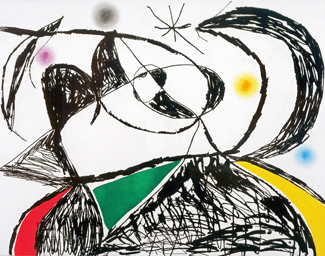 Photo: Collection of The Kreeger Museum

The Joan Miró exhibition at the Kreeger Museum     features works from the museum’s collection such as selections from “The Mallorca Suite (Sèrie Mallorca).”

Indeed, he was able to incorporate elements such as grace, sweetness and innocence while fully engaging them in combat with dark forces, stormy canvases and a full-throated expression of not only his Spanish soul, but his humanism.

“Joan Miró From the Collection of the Kreeger Museum” stems from a different phase of Miró’s life set in the island of Mallorca, where he lived and worked after 1940, following the end of the Spanish Civil War and the beginning of World War II.

This exhibition features the complete collection of works by Miró in the Kreeger’s possession, including “The Mallorca Suite,” “Makimono” and “El Vol de l’Alosa (The Flight of the Lark).”

They are unconventional, signature pieces befitting the underappreciated gem that is the Kreeger Museum. Here, Miró expresses and stretches his art through printmaking, which allows viewers to witness his thought process.

The Kreeger Museum for instance is believed to be the only place in the United States where a complete set of “The Mallorca Suite” images can be seen. Added to the set are various decompositions of each etching that offer a glimpse into how the work evolved, as the artist himself did in 1973.

“Makimono” is a huge (36 feet long and 16 inches wide) piece made of specially woven raw Lyon silk and printed with lithographed and etched designs from Miró’s original wood and metal blocks that took five years to execute in the 1950s. Though it infuses elements of Eastern culture and primitive echoes of the West, its bright colors and symbols are once again deep-seated expressions of Miró’s love for his native Catalonia.

The Kreeger exhibition is emphatically an exhibition about materials — paper, blocks, ink, silk — and provides a critical addendum to the never-ending glow of Miró’s work, a glow that manages, by resurrecting long-lost memories of his homeland, to triumph over the horrors of war.

Joan Miró: The Ladder of Escape

through Aug. 12
National Gallery of Art
on the National Mall between 3rd and 9th Streets at Constitution Avenue, NW
For more information, please call (202) 737-4215 or visit www.nga.gov.

Joan Miró From the Collection of the Kreeger Museum

Gary Tischler is a contributing writer for The Washington Diplomat