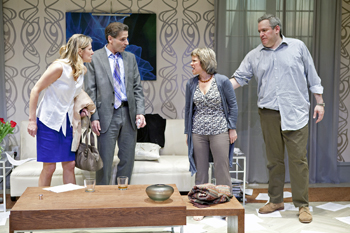 In the opening scene of Signature Theatre’s “God of Carnage,” two sets of seemingly civilized parents sit in the living room of an elegant New York apartment trying to come to terms with a violent playground dispute between their two young sons.

After less than a minute of dialogue, at which point one parent accuses the others’ child of being “armed” with a stick, it’s clear that the schoolyard brawl will erupt into a battle of another sort. What isn’t clear — at least not yet — is that the adult confrontation will eventually make the children’s skirmish seem harmless by comparison.

From left, Vanessa Lock and Paul Morella as Alan and Annette Raleigh engage in a heated war of words with the Novaks, played by Naomi Jacobson and Andy Brownstein, in “God of Carnage” at Virginia’s Signature Theatre.

“God of Carnage,” a fiercely funny one-act play by Yasmina Reza, exposes the darkness that lurks in the hearts and minds of even the most “evolved” adults. (Earlier this year, it was released as a film directed by Roman Polanski and reviewed in the January 2012 issue of The Washington Diplomat.)

With taut direction by Joe Calarco, deft character development in Reza’s script and vivid, energetic acting, “God of Carnage” keeps us entertained for its full 75 minutes. As with Signature’s recent production of Reza’s “Art,” the characters in “Carnage” repeatedly eviscerate each other with a single, sarcastic quip.

“Carnage” is centered entirely on the living room conversation among the two couples: Michael and Veronica Novak (he sells home supplies, she writes books about international trouble spots like Darfur) and Alan and Annette Raleigh (he’s a lawyer for a pharmaceutical company, she’s a wealth manager). The urbane professionals, meeting with the best of intentions over coffee and pastry, immediately stumble as they try to reach consensus on how to resolve a fight in which the Raleighs’ son smacked the Novaks’ with a stick, knocking two of his teeth out. The accusation that the Raleigh kid was “armed” sets off a verbal tug of war in which sophisticated semantics repeatedly reveal cloaked aggression.

“We’re eccentric enough to believe in the soothing power of culture,” Veronica — played high-minded and full of self-regard by Naomi Jacobson — condescendingly tells the Raleighs when they inquire about her books, for example.

Veronica wants the Raleigh child to apologize to her son, and to “mean it.” That triggers an exasperated response from Alan, an aggressive, shrewd corporate attorney who reveals slippery ethics during a series of client phone calls that he obnoxiously takes on his cell phone. Alan seems to think that the kids’ fight was simply kids being kids.

Michael, a beefy man with a working-class New York accent, seems to think so, as well, although he obviously has sympathy for his son and views the Raleighs as insufferably pretentious. Michael, effectively portrayed by Andy Brownstein as the play’s most sympathetic character early on, eventually reveals his more aggressive inner nature after he introduces a bottle of rum to the proceedings.

All of the actors in “Carnage” are skilled and convincing, but Paul Morella’s Alan Raleigh is especially good. He plays the character with a mix of arrogance, intelligence and a kind of smarmy charm, his slim physique and perfectly tailored suit bolstering the character’s believability. His wife Annette is also rendered effectively as something of an ice queen by Vanessa Lock.

One of the play’s most interesting aspects, aside from the rapid-fire verbal volleying, is the way the allegiances repeatedly shift. At first, the couples are naturally teaming up against each other. But it’s clear from the rolling of both women’s eyes when the men are speaking — and the way the men mock the women’s concerns — that resentments abound.

At various points, the women team up on the men, the men on the women and briefly, the spouses even switch sides in battle.

Staged in Signature’s smaller, 115-seat ARC theatre, this production feels especially intimate, as if you are sitting on an adjacent couch at a friend’s house observing in quiet horror, although the Signature audience was rather vocal, laughing and hissing in equal measure at the acerbic action onstage.

Although the dialogue is bracing and at times almost vicious, there is a cathartic quality about the honesty of the exchanges. It’s also impressive (and maybe a bit unbelievable) that strangers would say these things to each other — and listen to and absorb the insults — without someone storming out. The Raleighs do try to leave on a couple of occasions, but are coaxed into staying by the Novaks, who hope to find resolution.

As the play progresses, courtesies are abandoned and truths emerge.

“Courtesy is a waste of time,” Veronica bellows at one point. “It weakens and undermines you.”

“Life is a struggle until you die,” Alan says at another point in the play.

Indeed, once the veneer of civility is stripped away in “God of Carnage,” we see these characters as the sad and empty people they really are. It might not be pretty, but it makes for riveting theater.