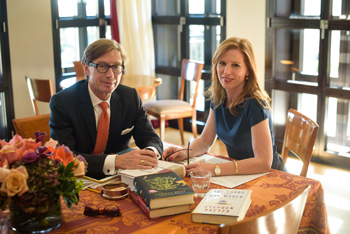 Huberta von Voss-Wittig runs a tight ship. She has to if she wants to hit her deadlines while commuting to New York twice a week, helping her children with their homework and accompanying her husband to high-profile diplomatic functions. In between, she regularly walks, swims and operates on five hours of sleep, while sneaking in the occasional power nap.

An accomplished journalist and author, Huberta von Voss-Wittig is the wife of German Ambassador Peter Wittig and the mother of four children, ages 7 to 25. She is currently the New York correspondent for ICON, a prestigious fashion and lifestyle supplement to Germany’s Sunday newspaper Welt am Sonntag.

German Ambassador Peter Wittig and his wife, journalist Huberta von Voss-Wittig, met in Bonn. “It was a typical Bonn party — a journalist talking with a government official,” she joked. “We had the same chemistry, passion about politics and culture.”

Her office is often a train compartment during her commute to New York. “I take the Acela and sit in the ‘quiet car.’ I try to get the window seat in the fifth row on the left side,” she said. “Often I finish my stories on my way.”

After studying political science, history and French literature and language in Germany, she worked as a political correspondent for several daily newspapers. Voss-Wittig also served as spokeswoman for the president of the German Bundestag, her country’s Parliament, and later as an expert on contemporary history, international politics and human rights for the Bundestag.

Given her media and human rights background, it’s no surprise that Voss-Wittig knows how to make waves, even in the constrained circles of diplomacy. In 2012, while her husband was Germany’s U.N. representative in New York, she and Sheila Lyall Grant, wife of Britain’s top U.N. diplomat, urged Syria’s first lady to tackle the country’s violence in an online video that went viral.

“What happened to you Asma?” was just one of the provocative questions posed to Asma al-Assad, the glamorous wife of Syrian President Bashar al-Assad, whose country was mired bloodshed after he crushed pro-democracy protests in 2011. The video said that while “some women are for style,” others “have forgotten what they preached about peace,” calling for Asma to “stop her husband” and “stop being a bystander.”

Following the video and as part of her other work, Voss-Wittig has appeared on CNN, BBC, Al Jazeera, ZDF and many other media outlets.

“Women carry change; they are change-makers. As women we have a responsibility not to harm, shame or blame. We inspired a lot of women [with our video] but I didn’t do it to become an activist. I respect the lines between my husband and me. I don’t report on politics any more. I am here as a guest,” Voss-Wittig explained.

“My husband and I are a close-knit team,” she added. “We have a clear division of labor but there is nothing we don’t talk about. I wouldn’t write my own memoir because I honor that trust that we have. We are independents; we are not part of any party.”

But a mutual affinity for politics initially brought them together.

“We met at a party in Bonn on the 11th of November — 11/11,” she recalled. “It was the beginning of Carnival in Rhineland. He was in the Foreign Ministry. It was a typical Bonn party — a journalist talking with a government official. We had the same chemistry, passion about politics and culture. Bonn has always been provincial, not a huge city. It’s not a city of pretention. It is honest, not exciting but honest.”

The couple later moved to Berlin and most recently lived in New York while Wittig served in the United Nations. They have also been posted in Lebanon and Cyprus. “In Beirut, I had a best friend who is now like a sister…. It’s quite complicated when you make friends,” Voss-Wittig said of the roving life of a diplomat. “It’s hard to have friendships. You have to move on.”

But the sacrifices are worth it. “You will be happy if you like doing your job. You have to be passionate.

“I make my own money,” she added proudly. “I started working early in my life and one thing led to another.”

In addition to her writing, Voss-Wittig lends her time to various causes and now serves on the board of the Washington Ballet after she hosted the renowned local company for its annual ball last year at the German Residence.

The family has grown bigger since they took moved into the residence on Foxhall Road. They adopted a rescue puppy, Mikosch, named after her first teddy bear. “We walk in the morning on Garfield Street. It’s so wonderful to have a river and a forest in the neighborhood. I get up at 5:30,” Voss-Wittig said. 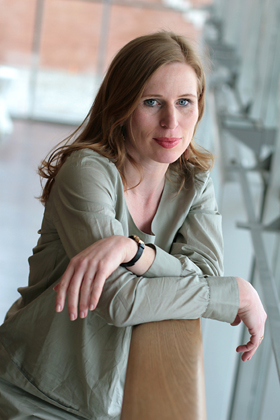 Huberta von Voss-Wittig is the New York correspondent for ICON, a fashion and lifestyle supplement to Germany’s Sunday newspaper Welt am Sonntag.

“We are a big family. We all love this house. It’s big enough for us upstairs so that everyone can have their own room and we love the contemporary design,” she said of the sleek, modern residence, designed by well-known German architect O.M. Ungers.

Voss-Wittig invited us for a tour upstairs of their private quarters, a tidy but cozy, lived-in space that contrasts with the more formal downstairs, which is filled with contemporary, museum-quality artwork. The space is home to breathtaking photographs by David Jay, a longtime fashion photographer whose latest project is a series of arresting images that depict America’s wounded war heroes titled “The Unknown Soldier.”

“I really love America,” Voss-Wittig noted. “I’m grateful for everything America does.”

When asked if she has any tips for managing a busy work life and home life, Voss-Wittig admitted, “The only trick I have is having a good au pair. If you have a bad one…” she paused and made a face.

But Voss-Wittig considers herself a hands-on mom determined to spend quality time with her family despite their hectic schedules.

“I like cooking myself. Our family gets together around food. We have a wonderful [executive embassy] chef and I want to support him. I wouldn’t want him offended but I just like my own cooking — simple things, not a three-course meal.

“I don’t see us as famous,” she continued. “We don’t accept many invitations. The afternoon is still the children’s time…. I grew up with hard-working parents. They came out of the war and were refugees. They had a strong work ethic,” she said, adding that, “It’s not who you are but who you want to be.”

“My father was very involved in politics and loved to entertain, especially dinners for eight. Our home was a beehive,” she recalled. “I had an amazing mother. She enabled me to do what I’m doing. She ran her own business so she wasn’t always there. She was a dressmaker. I still have some of her clothes.”

Voss-Wittig said that women from Munich and Hamburg traveled to her mother’s store and studio for her couture pieces and custom-made wedding and cocktail dresses. “She was an elegant person and a great role model.”

“My kids are my everything,” she told us. “I’d drop everything for them. I adore being with them. Some days I’m just muddling through, but it always works out.”