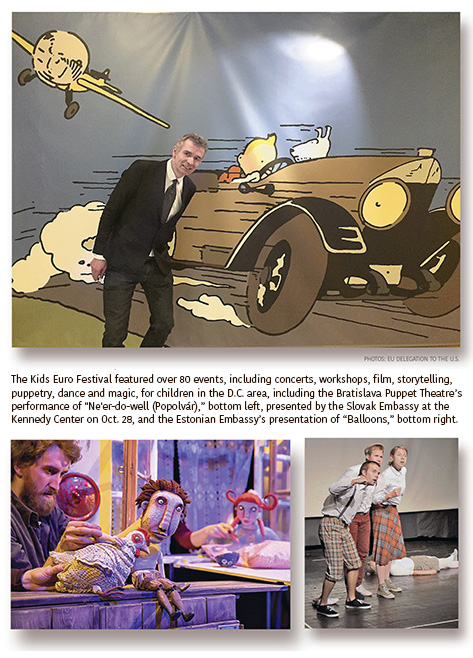 Imagine being able to give your children a journey through Europe without having to worry about the hassle of crowded airports, expensive hotels and long treks that beget cranky kids. Since 2008, the European Union Delegation to the U.S. has offered local families a chance to experience European culture through an array of free educational and artistic events across the city.

From Oct. 26 to Nov. 10, as part of the 12th annual Kids Euro Festival, the embassies of the EU member states will bring some of Europe’s most talented children’s entertainers — from actors and singers to chefs and filmmakers — to the D.C. area for one of the largest children’s performing arts festivals in the United States (also see “Massive Kids Euro Festival Is No Mere Child’s Play” in the October 2012 issue).

“The Kids Euro Festival mission is to provide equal access to the European arts for D.C. area children and families of all backgrounds,” said Christine Vest, cultural affairs officer at the EU Delegation and a primary organizer of the festival.

To do that, events are free and held at locations throughout the city, including EU member state embassies, public libraries, the National Gallery of Art, Imagination Stage, AFI Silver Theatre and myriad other venues. They’re also held at various times, including evenings and weekends for working parents, and are all-inclusive (an Oct. 26 event for instance at the French Embassy featured a full day of activities for children with special needs).

Vest said the Kids Euro Festival is funded by donations that have allowed it to remain free since its inception. “We received a generous donation this year from the Carmel Cultural Endowment for the Arts, for which we are most grateful,” she noted.

With programs both for the general public and for school groups, more than 10,000 D.C.-area children and their families enjoy the Kids Euro Festival each year.

There are over 80 programs to choose from, ranging from concerts, workshops and cinema to storytelling, puppetry, dance and magic — all largely geared toward children ages 2 to 12.

“The events are all about exposing new cultures and new languages to kids when they’re young,” said Vest.

And there is no shortage of cultures for children to experience — some of which don’t involve language at all. On Nov. 4, for example, the Estonian Embassy presents “Balloons,” a playful production in which the actors make sounds, talk and sing but not in any existing language, creating a fantasy-filled world for children, regardless of nationality or native language.

On that note, many events are designed to boost children’s self-confidence, such as the storytelling session “Igor, The Bird Who Couldn’t Sing,” hosted by the Embassy of Luxembourg. Here, children use their voices, some instruments and a felt board designed by textile artists to learn about the beauty of creating sound and the importance of pursuing your passions and interests, regardless of skill level.

Many of the events take a hands-on approach to engage children’s imaginations. The Spanish Embassy is hosting a workshop that teaches children about the basics of electronic circuits so that they create their own interactive robot-designed postcard. Meanwhile, a series of three cooking classes led by two professional chefs from Pittsburgh will show children how to cook traditional Polish dishes such as apple pancakes.

If you’re short on time (or attention span) and want to experience several activities at once, check out a screening of short films from Bulgaria, Malta and Portugal on Nov. 8 at The Forum at Shakespeare Theatre.

In addition, the Embassy of Finland will be hosting several events on Nov. 3 from 2 to 5 p.m. to celebrate its rotating presidency of the EU. The afternoon will feature the Estonian “Balloons” performance, folk tales from Hungary, episodes from the “Moominvalley” Finnish TV show and “Frogpond,” a dance-theater performance about the importance of clean water. There will also be activities for children of all ages, including a playing corner with toys, books and drawings, as well as food and refreshments (register soon since space fills up quickly).

“Most kids have never experienced European culture before,” Vest said, “or know a lot about where people came from. I hope that the festival makes them more curious about Europe and end up studying our languages or visiting European countries when they’re older. After all, these are our future policymakers, and so I hope [this festival] helps them to think about us in the future.”

tfrom Oct. 26 to Nov. 10
Locations throughout the city
For more information, visit http://events.euintheus.org/landing_page/kids-euro-fest/.

Hannah Vandegrift is an editorial intern for The Washington Diplomat.