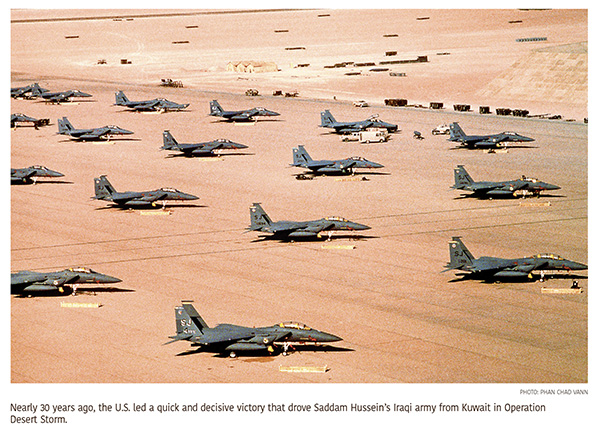 Nearly 30 years after the end of Operation Desert Storm to drive Saddam Hussein’s army from Kuwait following Iraq’s invasion of the oil-rich emirate, it is worthwhile to reflect on lessons learned that may be relevant today.

To take us back to that period, the United States was the undisputed global power having prevailed in the Cold War; however, we still faced the ghosts of Vietnam when U.S. military power and strategy were held in check and defense budgets slashed. Apart from the smaller operations in Grenada and Panama to thwart anti-U.S. leaders, our ability to wage a broad-scale diplomatic and military effort had not been tested.

President George H.W. Bush’s experience, relationships and reliance on his military and national security experts led to one of the most decisive military victories in the 20th century. It should be noted that there are critics who felt strongly that Saddam Hussein should have been removed from power, in part because — as is the case today — the Kurds were viciously attacked in the wake of the war. We have learned however that there is a difference between completing a defined military mission that enjoyed nearly unanimous international consensus and taking on the wholesale remaking and rebuilding of a nation and its society.

President Bush knew when he declared victory quickly and limited the mission short of regime change in Iraq, he was avoiding adding further fuel to the embers of an unsettled Middle East whose fragile borders and ethnic divisions can be easily explode.

I would like to highlight five lessons that I think are worthy to remember having played a small role in Desert Storm and looking at the world from the vantage point of the Meridian International Center:

With the current tensions along the Turkey-Syria border, not to mention threats around the world ranging from Iran to North Korea to Russia, it is important that we reflect on a period in our global history when nations came together with American leadership and united around an effective diplomacy and military strategy that accomplished a clearly defined, internationally vital objective.

Stuart Holliday is president and CEO of the Meridian International Center and served on active duty as a naval intelligence officer during Operation Desert Storm.