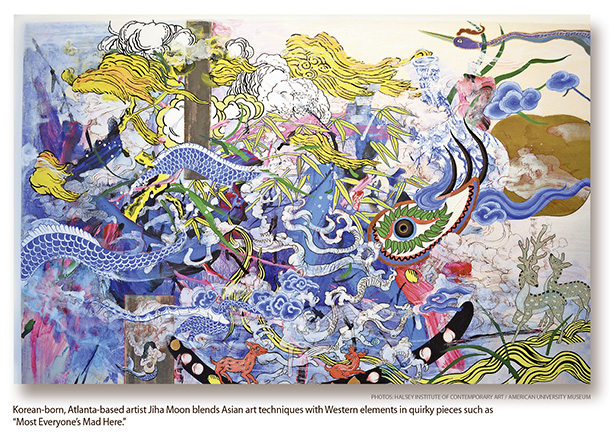 The show, at the American University Museum, is a quirky surprise from an artist who revels in playing games and posing probing questions. Images of Angry Birds and emojis mix with Asian tigers and Indian gods in compositions that incorporate Eastern art techniques and iconography through the use of Hanji paper and Korean silk, peaches and fans. It’s a fun, irreverent show that blurs the lines between East and West, the familiar and the foreign, using small details to ask big questions about racial perceptions, technology and global identity. 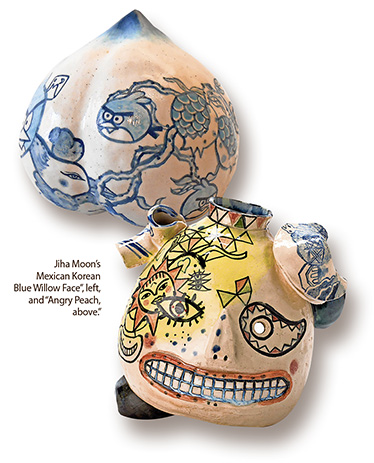 “I think that Jiha Moon’s work has this really universal appeal to it. It’s colorful, there are a lot of references to popular culture, but the more you look at it, the more you realize she’s making very smart and sometimes satirical commentary about objects or imagery that have been associated with Asian culture [but] not necessarily part of Asian culture,” curator Amy Moorefield told The Washington Diplomat.

Take, for instance, Moon’s use of fortune cookies. The artist’s ceramic fortune cookies reflect the history and interplay of cultures that characterizes the core of her work. As Moorefield noted, “Fortune cookies have been sort of assigned to China or Asia, but they were developed in California. It’s really a smart way of her responding as an artist, who was born in Korea but lives in Atlanta, to say, ‘Hey, I’m not defined by one culture. I’m defined by many. And my work embraces all of that.’”

Look closely and visitors will see the all-too-familiar Facebook “F” logo, followed closely by a horseshoe — really, a “U” — a symbol of good luck. “I don’t want my work to appear whiny or too serious about it. I always love humor and jokes in art,” Moon said in a video about this show produced by the Halsey Institute of Contemporary Art.

Moon’s mixed-media approach is visually enticing. She effectively mixes cultural references from Korea, Japan and China with Western elements, drawing chuckles even as she tries to shake up and unsettle those viewing her work. 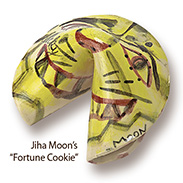 “She is delightful, she has such smart things to talk about, she is incredibly accessible as an artist,” Moorefield said. “She’s just got this great sense of humor, but at the same time she’s touching on really important elements of global culture and American culture and taking back what is really part of her heritage as well in terms of Korean culture.”

Quirky details are depicted in gaudy acrylic colors on traditional Korean Hanji paper or on carefully crafted ceramic vases. Moon also explores the Blue Willow china pattern, created in England in the 18th century but often thought to be Chinese in origin. The patterns, however, were inspired by the blue-and-white wares imported from China. And she frequently riffs on peaches, an important iconography element in Asian art, symbolizing fertility and fruitfulness, turning that, for instance, into an Angry Peach with the popular Finnish video game Angry Bird as the central image.

“There are all those types of little moments if you look carefully throughout the exhibit,” Moorefield said.

Moon created a new installation for this travelling exhibition, which has gone to 10 venues across the United States, that reflects on a traditional Korean dining experience. “For Jiha, it was very important for her, and it was also sort of new for her, to start doing these site-specific or unique installations. It was a wonderful way for her to showcase a lot of her ceramic work, which has become a really important core of what she focuses on,” Moorefield said. 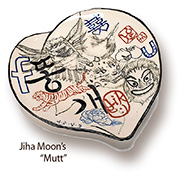 “But also, it kind of opens the door a little bit — you’re like, ‘What are these low tables and these beautiful pillows? It looks like it’s maybe set for dining?’ And these ceramic vessels are strange and weird and they look like faces or fortune cookies. So, it became a really wonderful way to communicate to people about different types of dining, but also the work is very subtly charming as well as subtly [saying], ‘This is my culture, but I’m using elements from a variety of Western cultures to make commentary,’” Moorefield explained.

It’s particularly apt that Moon has compared her own work to food. “I want that taste to come at the end,” she said in the documentary about the exhibition. “On the top, there’s a sour, there’s a sweet, there’s spicy, all types of interesting tastes of life on it, and then deep down it’s subtle and it’s very serious.”

Mackenzie Weinger is a contributing writer for The Washington Diplomat.