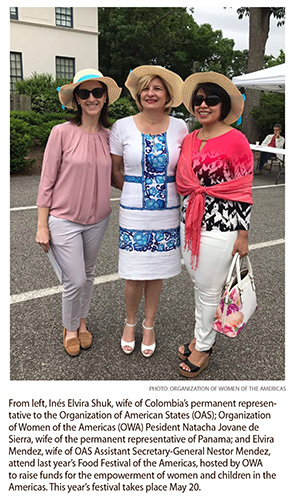 From an annual festival celebrating culture and gastronomy to events raising funds for nations hit by hurricanes, the members of the Organization of Women of the Americas (OWA) stay busy year-round trying to make an impact in Washington, D.C., and beyond.

Female ambassadors, the wives of ambassadors, and the women or the spouses of those who work at the Organization of American States make up the OWA, an active social and charitable group that’s been a key part of the fabric of Washington’s diplomatic scene since its founding in 1997.

The board of directors, led by current OWA President Natacha Jovane de Sierra, the wife of the permanent representative of Panama, “is a melting pot, just like the OAS,” she told The Washington Diplomat during a recent chat at the historic OAS headquarters, a magnificent building dominated by a large indoor tropical patio and marbled staircases.

And the group’s larger membership also reflects the vitality of the OAS, a regional forum for political discussion and policy analysis in Western Hemisphere affairs.

“We’re always seeking new members, like the new spouses, and we’ve had a lot of support from the lady ambassadors. Because now we have women! And that is wonderful. It is really wonderful to have lady ambassadors, and they are very happy with our mission, which is empowering women and children,” she said.

Since its founding, the group, a 501(c)(3) nonprofit, has been laser-focused on its fundraising activities. Under Sierra, whose tenure at the top of the organization will be up later this year, the OWA has turned that attention to a mission of “empowering women and children of the Americas.”

“That’s how I like to call it. It used to be ‘vulnerable children and women,’ so I thought it’s time to change to ‘empowering women and children,’” she said.

This year marks the 20th Annual Food Festival of the Americas, held on the OAS grounds on May 20, an event that draws many in the diplomatic community to try pupusas from El Salvador, arroz con pollo from Panama or an array of margaritas from Mexico — all for a good cause. The gathering features tasty displays from some of the OAS member countries, as well as observer nations such as China and Italy, to eat on site, and there are plenty of gifts like Chilean wine and Caribbean rum for sale to take home.

“It’s a big fundraising event and it’s a beautiful opportunity for the countries to show off — it’s not only a gastronomic festival, but it’s cultural. So we have a lot of folkloric groups, musical groups, that come,” Sierra told The Washington Diplomat. “A lot of people make the effort to bring their groups because it’s a window, it’s a showcase to let other people know who we are as different countries.

“Do not eat for three days, and come in and have fun. The food is fantastic. People really make an effort to bring out the best of their countries,” she added. 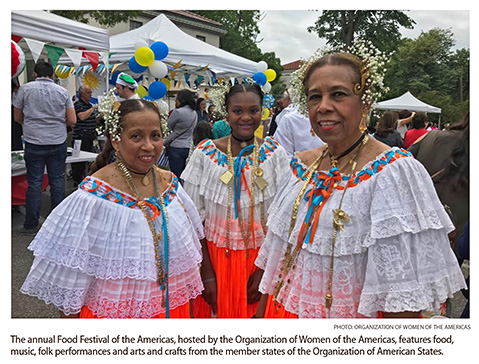 The festival is, of course, a fundraising event, with 70 percent of the proceeds going to an NGO in one of the member countries and 30 percent staying in Washington, D.C., given to the OAS’s Art Museum of the Americas. The group raised about $20,000 last year and is hopeful this year draws even more into the fundraising coffers, with Belize as the main recipient.

As for Sierra, with her time leading the group drawing to a close, she says she is proud of what it has accomplished since she came on board in 2016.

“I’ve been in Washington two years. I got here and — I’m a psychologist back home — and I said, I don’t have a license to practice here. I need to get busy. Otherwise, what do I do with my time? So the minute I stepped out of a plane, I said, ‘I’m in. Let’s work. Let’s help.’ And so I’ve been busy,” she told The Diplomat. “I didn’t know what it entailed. Nobody told me, but it’s so gratifying.”

An event like the food festival is about entertaining those in Washington, but it also taps into the organization’s larger goal. Last year, the food festival donations went to an NGO focused on the financial education of women migrants — and the impact, Sierra said, is still reverberating.

“I believe education is the way to ascend to a different level and leave poverty behind,” she said. “I got a testimony from a lady who was provided with the financial education, and she said, ‘Thanks to the group, I can now save money to send my son to college.’ It never occurred to her. She’s a migrant woman, most of these women are very poor, they come without education, and then she’s saving for her child to go to college — that changes a world. That’s what’s so gratifying about this job: It impacts a lot of people in our community.”