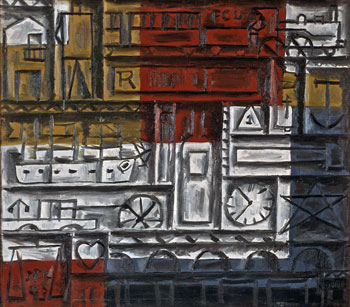 I was a bit puzzled when I sauntered through the door of the Art Museum of the Americas (AMA) to find eye-crossing, plaid-like patterns twisting my vision. Bright colored vertical lines of blues, whites and reds made me squint. The odd geometric shapes gave the paintings the effect of movement, and I found myself wondering if I drank too much wine the night before.

Wasn’t this supposed to be an art exhibit about political change and cultural awareness? AMA, after all, is part of the Organization of American States (OAS), a regional intergovernmental organization that promotes peace, human rights and democracy.

I’d reviewed similar exhibitions before — shows that featured Spanish artists, Uruguayan works or Canadian photography, usually with a social or political tinge. But this one, “Constellations: Constructivism, Internationalism, and the Inter-American Avant-Garde,” was very different.

The exhibit delves into the history of geometric abstraction and its varied forms in the region. According to the museum, it “recognizes the socially constructive role that the arts have played in fostering democracy and freedom of expression at intense historical moments of social and political change.”

There is, of course, meaning and message behind the works — local nuances, reflections on shifting values and larger movements such as modern art — but it takes effort to discern.

A piece by Paraguay’s Enrique Careaga, for instance, features unidentifiable green orbs that seem to float aimlessly on the black canvas. Across the room, an apple-red backdrop is interrupted by blue-tipped angular cubes that seem to diagonally propel from the corners, creating a dizzying effect.

Another abstract piece reminded me of Andy Warhol’s Marilyn Monroe prints, except the colorful images all depicted the same letter “A” — which simultaneously looked like a woman’s curvy midriff, crotch and upper thighs.

The link between the esoteric works — intriguing as they were — and political commentary is far from obvious. Thankfully, exhibit curator Abigail McEwen, assistant professor of art history and archeology at the University of Maryland, is able to shed some light on the connections. 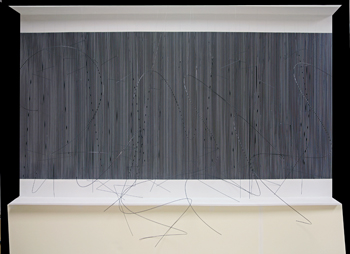 The exhibit itself is a showcase of history and politics in the making, she says. Decades ago, the very notion of abstraction was a symbol of freedom and a break from nationalism. The point was to intentionally dissolve any links between culture and art.

The movement’s history, McEwen explained, is rich, and its rise demonstrated not just a change in taste from realist paintings, it captured a change in the world order:

Q: What is the importance of abstract art in American history?

A: The rise of abstraction in American art history is most closely related to the genesis of the New York School of abstract expressionism in the immediate post-World War II era. In line with the international ascendance of the U.S. in geopolitical terms, the emergence of American abstraction appeared to mark the triumphant shift of the “art world” from Paris to New York by 1950.

Although abstraction certainly embodied U.S. cultural imperialism, to many of the Latin American countries — and no less, to the first director of the AMA — abstraction also signaled “American” values of freedom and democracy in contrast to the dogged socialist realism of the Soviet bloc. Across the Americas, abstraction also represented a break with nationalist realisms (e.g., Mexican muralism), and in this way too it conveyed an international currency and relevance to artists who had traditionally been seen as peripheral to the development of modern art.

Q: But how did these works “foster democracy and freedom of expression?”

A: In contrast to the figurative realism of much of the art that preceded abstraction in Latin America, for the most part abstraction carried no national connotations — for instance, no references to the Mexican revolution, to Brazilian fazendas (coffee plantations), to Cuban rumba dancers, to Colombian civil war. In fact, abstraction was controversial at this time during the1940s and 1950s precisely because it seemed too “foreign” or removed from the local contexts in which it was made.

“Constellations” suggests that these works fostered democratic values and freedoms through their resistance to literally describing the social realities of the time in which they were created. Rather, these works sought to transcend the facts of world war, dictatorship, revolution, etc. The refusal of this art to be easily co-opted by national politics (how can a line, for example, be “Argentine?”) and its opposition to the figurative styles then advocated by the USSR and China gave it contemporary connotations of freedom and internationalism.

Q: How do these works relate to the OAS’s mission?

A: Most of these works were added to the collection of the OAS under the aegis of the AMA’s founding director and curator, the Cuban-American José Gómez-Sicre. In many ways, his tastes were shaped by the fallout from the Cuban Revolution, and his preference for abstraction — and resistance to indigenous realisms, say — fell very much in line with the inter-American values of the OAS and its efforts to broker hemispheric peace and cooperation.

Q: Why do you suppose people like abstract art? How is it different than other forms of art?

A: Historians and philosophers have speculated (for millennia!) about why abstraction appeals or doesn’t appeal to different people. With regard to “Constellations,” I might argue that this kind of geometric abstraction is optically engaging — the works, particularly on the first floor, play with optical illusions and simulate movement, which creates sometimes dazzling visual effects.

In contrast to the art of, for example, the Italian Renaissance or dynastic Egypt, 20th-century geometric abstraction is intelligible to viewers who haven’t studied the history of patronage or religion; this art doesn’t presuppose historical knowledge and is accessible, in that sense, without extensive art-historical study.

Q: What do you hope people will learn or take away from this exhibit?

A: I hope that visitors appreciate the versatility of abstraction as a visual form and, perhaps, come to understand as well the ways in which these artworks embodied particular ideological values during the mid-20th century. Although some of the artists have international reputations, many of them are lesser known and deserve to be considered in revisionist histories of American abstraction.

In grouping the works thematically, rather than ordering them chronologically or nationally, I tried to suggest a range of contacts and influences that stretched across the Americas and to Europe and, in so doing, to argue for the truly international orientation of Latin American abstraction.

But mostly, I hope that visitors see that Latin American art is more than Diego Rivera and Frida Kahlo and that they are moved, visually or philosophically, by the works in the show.