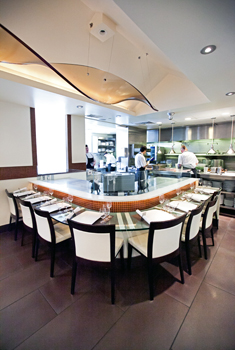 Nestled on the piedmont of Catoctin Mountain, Frederick is a charming small city in Maryland that has a long, rich history, as well as a bright future. Since it was laid out as a town in 1745 by German settlers less than 50 miles north of Washington, D.C., Frederick has played an important role in Maryland’s history, serving as a strategic crossroad between east and west, north and south. So perhaps it is not surprising that it should be the birthplace of a pair of talented young brothers destined to establish themselves as important players in the evolving contemporary American fine dining movement.

Chefs Bryan and Michael Voltaggio earned celebrity status by becoming the final contestants on season six of Bravo’s popular culinary competition show “Top Chef.” Michael went on to win the coveted title of top chef, but both brothers have parlayed their moment in the spotlight for enduring and expanding careers in the restaurant industry.

Bryan Voltaggio was already a rising chef before his “Top Chef” appearance, having opened his first solo venture Volt in 2008 to much acclaim in his native Frederick. His run on “Top Chef” helped to elevate Volt’s stature, which in turn cemented Frederick’s transformation as an up-and-coming regional destination that combines quaint small-town appeal with cutting-edge dining and arts.

Bryan has since branched out with other widely anticipated ventures in the area, including the recently opened casual eatery Lunchbox, just a few blocks away from Volt, and the soon-to-debut Range, a new 14,000-square-foot restaurant at the Chevy Chase Pavilion in Friendship Heights that will incorporate lesser-used cuts of livestock.

Despite his burgeoning career, he hasn’t dropped the ball on his signature achievement, Volt, which continues to rack up accolades. And as diners from around the Washington area wait patiently for hard-to-come-by reservations, Volt remains an anchor of Frederick’s increasingly sophisticated dining scene.

The Voltaggio brothers both began their food careers very early on working in the kitchens of local Frederick restaurants. Bryan went on to study formally at the Culinary Institute of America in Hyde Park, N.Y., then teamed up with chef Charlie Palmer at establishments in New York City, Las Vegas, and finally at Charlie Palmer Steak in the nation’s capital, from where he planned his move back to his hometown for the opening of Volt.

Teaming up with Hilda Staples, a former Capitol Hill aide and lobbyist-turned-highly-effective restaurateur, Voltaggio set out to create a restaurant that allowed him to capitalize on the fresh ingredients available from the rich agricultural areas that surround Frederick. These were the same foods that his family had grown and prepared during his childhood, an upbringing that formed the cornerstone of his own approach to cooking. 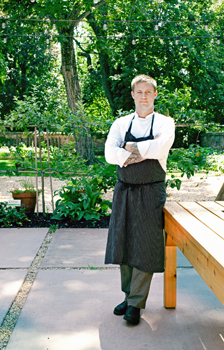 Chef Bryan Voltaggio’s culinary star continues to rise with several new ventures in the area, but that hasn’t diminished the quality or creativity of his first restaurant, the acclaimed Volt in Frederick, Md.

To house their new venture, the team selected a Frederick landmark, the Houck Mansion. Designed by noted architects J.A. and Reinhardt Dempwolf in 1890, the three-story, 8,000-square-foot brick mansion was the private home of the six Houck sisters, who occupied and entertained in the building until the last sister died in 1924. It was converted to a professional building by a group of doctors until the partners leased the space for the restaurant building. But by that point, the mansion required considerable renovation to restore it to its former glory while also creating a space suitable for a fine dining concept.

Today, the restaurant, whose traditional exterior is juxtaposed with its modern interior, is divided into several discrete dining areas: a main room, a kitchen dining room with a chef’s tasting table (Table 21), a lounge, and an area for private dining in the conservatory. The renovation preserved some of the mansion’s original historic feel while using minimalist modern design as a backdrop.

While the core of Voltaggio’s work rests on the slow food movement’s tenant of locally sourced and seasonally available ingredients (which is why the menu changes regularly), what is most evident is the notion of food as art. Each dish is a masterpiece reflecting both the careful planning and the creativity of the artist in producing a balance of taste, smell, texture and color.

All of the dishes are collections of compatible ingredients and each is built according to a precise design that lends an almost architectural feel to the food. Take, for example, the foie gras. A curving strip of the delicate liver is served with a small oval scoop of rhubarb sorbet, a pickled strawberry, coconut crumbs, and drips of strawberry compote each placed with precision on the plate-cum-canvas.

Volt’s offerings mirror the kitchen staff’s superior technical skills. Pan-seared dishes such as the halibut and black bass come with crusty exteriors and moist interiors; roasted meats (the lamb and pork are consistently exceptional) are never overcooked; custards are smooth; and pureed ingredients for drizzles and drops of complementary accents are intensely flavored. Deep frying, applied to vegetables such as chicory and cauliflower, also produces intriguing results, as do some of the more rarified techniques such as nitrogen freezing that Volt staff excels at.

At the beginning of the year, Volt introduced changes to its menu. In the main dining room, Volt now offers a four-course pre-fixe menu that allows several choices per course, as well as a set seven-course kitchen menu, either meat or vegetarian.

The daily menus are modest in their descriptions, which do not adequately capture what will emerge from the kitchen. A seemingly simple salsify dish, for example, turns out to be quite complicated. Voltaggio prepares the humble root vegetable three ways — pureed, fried chunks and potato chip-like crisps — then pairs the vegetable, which tastes rather like an artichoke (as opposed to oysters, from which the plant derives its other name), with paper-thin country ham, fruit and ground hazelnut. It is an inspired combination. Likewise, the delicate pork tenderloin is accompanied with new potatoes, deep-fried kale and a top-on baby carrot, accented with a sweet and tart house-made mulberry fruit leather.

In some fine dining restaurants, dessert is handled separately from the savory dishes, with results that don’t always integrate well with the rest of the menu. This is not the case at Volt, where desserts are treated with the same creativity and attention to detail as all the other dishes. The results are equally complex, with bits of puddings, custards, cakes, sauces, mousses, sorbets, cookies and candies working in harmony to create truly unique sweets.

Meanwhile, Volt’s substantial and varied wine program is designed to enhance Voltaggio’s creations, with pairings for the tasting menus. Under the guidance of Jill Zimorski, an experienced sommelier certified through the Court of Master Sommeliers, the program introduces new varieties that she has identified through her travels and research that reflect Volt’s values.

Volt also offers special touches throughout the meal that reinforce Voltaggio’s vision for the top-tier establishment. House-made still and sparkling water, excellent breads circulated throughout the meal, inventive amuse-bouches such as a savory macaroon filled with foie gras, and mignardises at the end of the meal such as dense chocolate truffles elevate the Volt experience from start to finish.

And like the cuisine, service at Volt is a carefully choreographed performance. It is indeed impressive to watch as teams of black-clad wait staff place the dishes on the table in perfect unison. This is not to say, however, that the service is stiff or overly formal, which it isn’t.

The overall success of Volt since its opening in 2008 has established Bryan Voltaggio as a culinary luminary and has helped validate Frederick as a distinct dining destination. That success has only intensified interest in Volt, often making it difficult to get a table. But the restaurant introduced changes in January to remedy the long wait times. Volt now takes reservations for all three dining areas only a month in advance, making the wait for Table 21 much shorter if you call early in the day to make reservations. Those changes will only further open up one of Frederick’s top attractions to an even wider audience, which is in for a treat when it watches the show that Bryan Voltaggio has in store for them.