Home The Washington Diplomat August 2012 For Pregnant Women, 40, Not 37, Is Magic Number 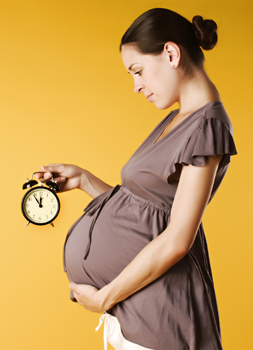 When I was preparing to deliver my younger daughter in 2010 at New Jersey’s Morristown Hospital, my midwife told me about a new rule there: no elective inductions of labor or C-sections before 39 completed weeks of pregnancy. If a woman or doctor wanted labor induced or a C-section scheduled before the magic 39-week mark, they would have to present the hospital with a legitimate medical reason why it was better to evict the baby early instead of letting things get closer to the 40 weeks that constitutes a completed pregnancy.

Morristown isn’t alone. In 2009, the American Congress of Obstetricians and Gynecologists (ACOG) issued new guidelines, updating 10-year-old criteria, warning against inducing labor prior to 39 weeks of pregnancy in the absence of a medical reason.

No one wants a premature baby. But many women, and even many doctors, don’t seem to take seriously the risks of “early full-term” birth — that is, births that happen in the window of about 36 to 39 weeks. After 37 weeks, a pregnancy is technically considered “full term,” and it’s easy to become impatient and just want to get that baby out of there, already!

But an ever-growing body of research shows that while a baby born at 38 weeks is generally a lot healthier than one born at 34 weeks, there are still long-term risks associated with eviction from the womb even just a couple of weeks before the baby is ready.

Most recently, a study published in the journal Pediatrics in early July, involving more than 100,000 New York schoolchildren, found that children born at 37 or 38 weeks did worse on third grade math and reading tests than kids born just a week or so later. The study showed that 2.3 percent of the children born at 37 weeks had severely poor reading skills, compared with just 1.8 percent of children born at 41 weeks; that’s a 33 percent increased chance of severe reading difficulty. They also had a 19 percent greater chance of having moderate problems in math.

Women should “at least proceed with caution before electing to have an earlier-term birth,” said lead author Dr. Kimberly Noble, an assistant pediatrics professor at Columbia University Medical Center.

If you’re not concerned about a few points’ difference in math, consider this: In March, a study published in the British Medical Journal found that being born just two to six weeks early was the greatest single contributor to the risk of disease among children ages 3 to 5. Babies born four to seven weeks early had a greater risk of asthma and wheezing than babies born full term, and babies born two to six weeks early were more likely to require hospital admissions in the first few months of life.

At Children’s National Medical Center in Washington, D.C., last year, 19 percent of admissions were newborns who fell into the category of “early term” or 37 to 38 weeks gestational age. “These infants came to the Children’s NICU because of morbidity related to being delivered early,” noted Dr. Billie Lou Short, the hospital’s chief of neonatology, in a release earlier this year. Short detailed the far-from-minor complications that can go with these “full-term” deliveries: breathing temperature instability, jaundice, longer hospital stays, and a higher mortality rate — yes, more babies die because they’re born even “just a little bit” early.

This isn’t an isolated problem. Elective inductions and C-sections have been increasing in the United States. In the last two decades, the rate of elective inductions of labor more than doubled. And by 2009, statistics showed that more than half of all C-section deliveries were performed at maternal request, and more than a third of those were performed earlier than recommended. According to the Centers for Disease Control and Prevention, the late preterm birth rate in the United States increased 20 percent between 1990 and 2006. During that time, C-section rates during the late preterm period climbed from 23.5 to 34.3 percent.

“To accommodate busy schedules and to minimize the chance that a patient will begin labor and require a non-elective procedure when her doctor might not be available, procedures are frequently scheduled just before 39 weeks of gestation,” wrote Dr. Michael Greene, a maternal-fetal medicine specialist, in an editorial in the New England Journal of Medicine that accompanied the findings.

Even with policies like Morristown’s in place at many hospitals, you don’t need to look any further than any pregnancy-related online message board to find evidence that both women and their doctors often want to get babies delivered before the 39-week mark even when there are no medical reasons to do that. “I’m 37 weeks 5 days today, trying castor oil!” a woman will declare. Or, “My doctor told me that I’m probably going to have a big baby, so we’ve scheduled an induction for 37 weeks.” (This even though ACOG’s guidelines specifically state that in cases of “suspected fetal macrosomia” — that’s doctor speak for a “big baby” — “current evidence does not support early induction of labor.”)

Hoping to stem the tide of “early full-term” deliveries, the March of Dimes has put together a tool kit for doctors and hospitals called “Elimination of Non-Medically Indicated (Elective) Deliveries Before 39 Weeks Gestational Age.” It includes a review of the evidence, a step-by-step guide to help hospitals adopt policies like Morristown’s, and educational materials for physicians and hospital staff.

No one is suggesting that a woman with preeclampsia at 37 weeks just hang out and wait, hoping her blood pressure doesn’t spike, until 39 weeks of pregnancy. But in a healthy pregnancy, there’s no reason to kick the baby out of a comfortable uterus a couple of weeks early. Pregnancies are 40 weeks for a reason.

The good news is that progress is being made. “Of the hospitals that reported an elective delivery rate in 2010 and 2011, 65 percent improved their performance. This is extremely promising news. We are making a difference in the lives of women and newborns,” said Leah Binder, CEO of health-care quality organization the Leapfrog Group, which has made reducing “early full-term” deliveries a priority.

But there is still work to be done, says Binder. “We are seeing far too many newborns delivered early and without a medical reason, and there are still a number of hospitals who refuse to make this information public.”

Want to know your hospital’s rate of “early full-term” deliveries? Check out data provided online by the Leapfrog Group: www.leapfroggroup.org/tooearlydeliveries.