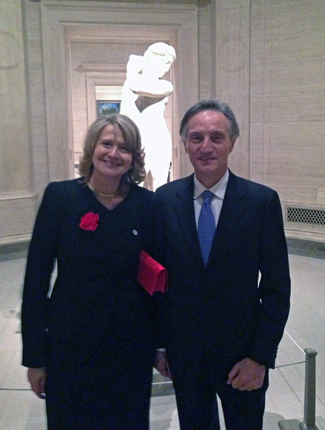 She loves what she does. “It’s easy to promote my country because I love my country,” said Laura Denise Noce Benigni Olivieri, wife of Italian Ambassador Claudio Bisogniero. “I love meeting people. When I tell people I’m from Italy, they have wonderful things to say: It’s so lovely, I really enjoyed Italy, or they just smile.”

And the Bisognieros have used the love that they and many Americans have for Italy in an unprecedented promotional campaign, both inside and outside the Beltway. Since arriving in Washington in January 2012, Laura Denise and her husband have become one of the most — if not the most — active diplomatic couples in town.

Laura Denise Noce Benigni Olivieri and her husband, Italian Ambassador Claudio Bisogniero, stand in front of Michelangelo’s “David-Apollo” at the National Gallery of Art during the inauguration of the “Year of Italian Culture,” a yearlong series of events showcasing Italy at cities across America.

The fundraising support comes on top of the embassy’s major push to promote the “Year of Italian Culture,” a massive charm offensive that unfolded across the United States in 2013, from art exhibitions in Boston to robotics demonstrations in San Francisco to space cooperation in Washington, D.C. (also see “Yearlong Cultural Festival Showcases All Country Has to Offer” and “Italian Embassy Partners With Big Events for Good Causes” in the March 2013 issue of The Washington Diplomat.)

It’s a concerted effort to spotlight a more positive image of Italy, beyond it’s well-known economic problems and constant political squabbles (many of the events in the “Year of Italian Culture” were funded through private corporate sponsorship).

Laura Denise — who said she tries to wear Italian haute couture whenever she can to showcase top Italian designers such as Armani — has been the warm, smiling face throughout Italy’s cultural and social coming-out party in the nation’s capital. “You have the chance to create rooms, tables, beautiful events,” she told Women’s Wear Daily earlier this year. “But if you take off all the trimmings, what matters most is meeting people.”

And there’s much more to this diplomatic wife than hosting fabulous events. “What is really important is my faith. I get my strength, my force comes from up,” she told us, pointing toward the ceiling. “Life is not easy and my faith makes me strong, gives me possibilities…. God is part of my life, something special.”

She belongs to “Mothers Prayers,” an international movement with headquarters in Tennessee that brings small groups of mothers together from all over the world to pray for their children and other loved ones. “I started a group; we pray here every Monday morning,” Laura Denise said. “These are very simple prayers when we give thanks…. We are doing it for others, but we are doing it for ourselves too. It gives me serenity … this is a meeting of souls.

“I am very Catholic,” she continued. “It wasn’t always like that. I was lukewarm to religion. Now, my faith is food — it gives me joy,” she said. “Being fair, being honest, builds a better world.”

“In America, religion is part of life,” she observed. “Religion, whether you are Buddhist or Hindu or Christian or Jewish or Muslim, gives you a great strength. Family values are a stronghold. It’s so important for parents to make Christmas special, make beautiful memories. It is a joyous family holiday, something warm. A magical Christmas is a good experience and those memories remain something special in your life.”

She pointed out that even though Italy is home to the Vatican, the crucible of Catholicism, Italy doesn’t have many of the Christmas traditions that are unique to the United States. 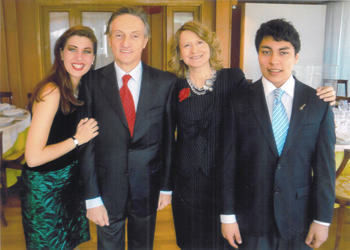 Laura Denise Noce Benigni Olivieri and her husband, Italian Ambassador Claudio Bisogniero, stand with their daughter Serena, a 23-year-old artist in Italy, and their son Giampaola, 18, who is studying biology at Virginia’s George Mason University.

“We have ‘The Nutcracker’ in Italy but not as a classical ballet” with all the holiday touches, she noted. During their first posting in Washington — when the ambassador was first counselor for economic and commercial affairs from 1992 to 1996 — Laura Denise also enjoyed making gingerbread houses with her children. “I got a mold and we made it from scratch. In Italy this doesn’t exist. We made it with Crisco and molasses. Everyone had his or her own house to decorate,” she said with a big smile.

Interestingly, while most Americans associate Italy with the country’s rich food and wine, Laura Denise said that for her, the decadence on this side of the Atlantic is more dangerous. “My only complaint about America is that I gain weight here! I love sweets — carrot cake, brownies, American apple pie,” she said. “It’s a real disaster. I could eat a whole plate of chocolate chip cookies.”

It wouldn’t be unheard of. “When I was 8 or 9 years old,” she recalled, “I ate a whole box of chocolates! I got sick. My mother called the doctor.”

“My grandmother always had cookies but she kept them under lock and key,” she added. “Now, I do the same thing with chocolates. I have a secret cabinet that’s under lock and key. By the time I find the key … I’ve sometimes talked myself out of eating the dark chocolate I love.”

No wonder she relishes Halloween, another uniquely American tradition. “I love the magic of walking in the dark. When we were here before, our 4-year-old daughter dressed like a witch. It was the first time we had Halloween,” she remembered. “It’s an experience we don’t have in Italy.”

Her daughter Serena is now a 23-year-old artist in Italy while her son Giampaola, 18, recently left Italy to attend college in Virginia at George Mason University, where he studies biology.

Laura Denise remains in contact with the American friends she made in the 1990s when Serena attended kindergarten at Little Folks School in Georgetown and then elementary school at Holy Trinity, also in Georgetown. “This was an opportunity to meet other parents, celebrate family life. It was so spontaneous and charming,” Laura Denise said. “Some of our friends came over for Labor Day and we sat around the pool. Some came to Italy. We stayed in touch with others. It has been so wonderful to see them again.”

She also remains fond of Georgetown, where the couple lived during their first D.C. posting. “In Georgetown, when you go for a walk, you meet a lot of people.” Now, she has different encounters roaming around the grand Italian Residence, an impressive stone estate on 22 acres bordered by Rock Creek Park. “When I go for a walk here, I meet a lot of squirrels … and deer too.”

It’s certainly been a different experience being the wife of a first counselor and being the wife of one of the town’s most socially active ambassadors — whose sprawling residence, named Villa Firenze, is a haven of Old World hospitality. 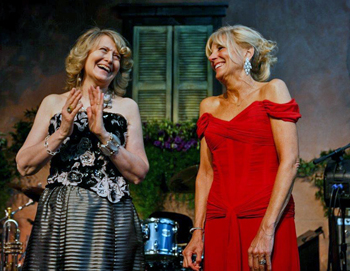 Laura Denise shares a laugh with Jill Biden at the Opera Ball, one of many prestigious events hosted at the Italian Residence, known as Villa Firenze.

During their initial D.C. posting, Laura Denise recalled that she would do all of the cooking for groups of 35 or more guests. She even took a Le Cordon Bleu culinary course. Now, she’s delighted to have Roberto, their chef at the residence, although she and her husband still enjoy taking over their ultra-modern Italian kitchen and cooking themselves.

The couple is intimately familiar with American life, having not only served in D.C. before but also in New York, where Bisogniero worked in Italy’s Permanent Mission to the United Nations in the late 1990s, focusing on political affairs and U.N. reform. Early in his career, the couple was also posted to China and Belgium.

Laura Denise graduated from the University of Rome, as did the ambassador, but the two didn’t meet there. A mutual friend introduced them, and now they have been married for 31 years.

Laura Denise’s father was an officer in the Italian Navy while her husband’s father served in the Italian Army, so they both grew up accustomed to living abroad, moving every couple of years, and changing schools — just the right background for the Foreign Service.

Antiques, some dating to the 12th century, from her Olivieri family now punctuate the residence. She is particularly proud that her hometown of Fabriano in the Italian region of Marche is renowned throughout Italy as one of the earliest places in Europe that made high-quality paper on an industrial scale. For centuries, special paper for books, drawings and even money have been produced in this town located about 40 minutes from Perugia. In fact, Laura Denise thinks that her love of books — she majored in literature in college — stems from growing up surrounded by beautiful paper.

“Paper is the greatest love of my life,” she said. “I’ve already bought many books here so I’ll have some to take home.”

On that note, one of her favorite things is to go on a “treasure hunt” at flea markets and discover old books.

“Around the world I have discovered old books and other things that I wanted. Here, I go to the flea market in Georgetown,” she said, noting that she also collects antique buttons and literary-based DVDs. “I have five different versions of ‘Pride and Prejudice.’ The first one is with Laurence Olivier and another one with Colin Firth. I also have several versions of ‘Jane Eyre’ — English, French and American.”

Her love of words began early.

“My grandmother wrote poems. She was very romantic and she loved me. When I was born, she wanted me to have all the names in the family,” Laura Denise said, explaining her long name. “She lived in an old house, probably 15th century. I went to visit her every summer for the whole summer. I was born in that house.”

It’s no surprise that Laura Denise and her husband share a love of books and reading, as well as classical music, tennis and golf. But their common interests have their limits, especially when it comes to the skies.

Claudio Bisogniero’s passion is flying and he enjoys piloting a small plane from the airstrip in Gaithersburg, Md. “I hate to fly, except for the movies you can watch,” Laura Denise said. “I would always rather take a train!”

Her husband also loves to parachute and has made 35 jumps over 25 years. “One time his chute only half opened but he got it opened just before he landed. From the time he was a teenager he has loved the sky. He loves the freedom and the silence.”

Even though Laura Denise doesn’t share her husband’s sense of aviation adventurism, she said she did love their trip to Alaska when they flew into a remote airport and landed on a glacier as part of the State Department’s “Experience America” program for diplomats. They have also spent part of their summers on Nantucket and Martha’s Vineyard.

Laura Denise said she appreciates that so many Americans have visited her own homeland, but she advises travelers to go off the beaten path in Italy, especially if you’ve already done the “grand tour” of hotspots such as Rome and Venice.

“I wish more people would explore Italy with an Italian map,” she said. “It would be great if they would just put their finger on a particular spot and go there.”