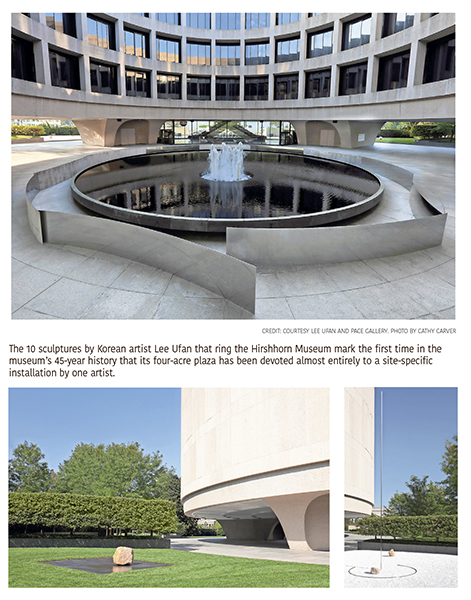 In a ring of sculptures crafted from steel and stone, Korean artist Lee Ufan has created a rare place of quiet contemplation on the National Mall, halfway between the warring factions in the White House and Capitol.

Lee’s work isn’t political but the outdoor location at the Hirshhorn Museum serves as a counterpoint to the chaos consuming the nation’s capital. It marks the first time in the museum’s 45-year history that its four-acre plaza has been devoted almost entirely to a site-specific installation by one artist.

The 10 sculptures, including one that transforms the plaza’s central fountain, aren’t grand or monumental. If you do a quick lap around the museum, then you’ll just see some boring rocks cast onto the ground amidst steel panels like those used in street repairs or construction projects. But a closer inspection reveals intimate connections as Lee juxtaposes these natural and manmade materials in relationships that are as important as the objects themselves. The exhibition’s title, “Open Dimension,” refers to Lee’s exploration of the intricate ties that bind people to the manmade world and nature. All of the sculptures are part of the artist’s signature and ongoing series titled “Relatum” (with subtitles to distinguish the pieces) to highlight these interrelated connections.

Born in 1936 in Korea, Lee has worked primarily in Japan and France as an artist, poet and philosopher. In the 1960s and ’70s, he founded the Mono-ha (“school of things”) art movement, which embraced art as a mode of meditation to reveal the world “exactly as it is,” often through the use of natural materials. “By limiting one’s self to the minimum, one allows the maximum interaction with the world,” Lee has said.

Due to that minimalist approach, viewers will need to take some time at the Hirshhorn and bring their own interpretations to the work because Lee doesn’t provide a road map or obvious clues about his intent. Above the concrete steps connecting the Hirshhorn to the Mall, two white angular stones rest in a shallow pool contained in a black stainless steel box, reflecting part of the museum and the changing sky. The rippling reflections in “Relatum-Box Garden” provide some life and vibrancy to the Hirshhorn’s depressing “Brutalist donut” design.

Lee found the stones on Long Island in rocky fields created by a glacier that bulldozed rocks in front of it before receding again more than 20,000 years ago. All of the sculptures in the Hirshhorn exhibition were created this year, an impressive output by an 83-year-old artist whose work has been featured in more than 140 solo exhibitions during his lifetime, including at the Venice Biennale and Guggenheim Museum. These sculptures also mark Ufan’s largest single outdoor sculpture project in the U.S. and the first exhibition of his work in the nation’s capital. In addition to the outdoor sculptures, the Hirshhorn display features four large minimalist paintings from his “Dialogue” series. The large acrylic canvases feature vessel-like shapes in gradually shifting colors that seem to float on a blank beige background.

Walking counterclockwise outside the Hirshhorn, the next sculpture titled “Relatum-Ring and Stone” features two stainless steel rings, one upright with a stone at its base while the other rests sideways on the grass with another rock near it. Two gigantic construction cranes at a nearby building site tower over the sculpture, adding another dimension or contrast between the manmade and natural materials.

The title of “Relatum-Come In” offers an invitation to enter a small, curving stainless steel sculpture next to a boulder. The claustrophobic interior’s polished surface creates a disorienting carnivalesque mirror in a space that seems private and intimate even though it’s only separated from the plaza by a few inches of steel. Another sculpture titled “Relatum-Open Corner” features a curving stainless steel arc resting against the museum’s wall like a manmade waterfall. Visitors can walk behind the panel, again creating a private space inside a larger public space.

“Relatum-Horizontal and Vertical” is one of a few sculptures utilizing fields of white gravel to separate the work from the surrounding grass or concrete. A tall, thin stainless steel spike rises more than 20 feet in the air above a steel ring and a stone on the ground. The juxtaposition resembles an antenna, connecting unseen satellites orbiting thousands of miles above the earth to the ground, unseen and buried beneath the crushed gravel of a parking lot.

As one rounds the museum back toward the Mall, “Relatum-Dialogue” utilizes the same white gravel in a circle that covers part of the plaza’s concrete surface before extending over a curb into the grass. One boulder rests on the concrete with another in the gravel-covered grass section. Both stones have false shadows of brown acrylic paint that are locked in place, impervious to the changing angles of the sun.

The first (or last) installation titled “Relatum-Fountain Plaza” has enclosed the plaza’s bland traditional fountain inside a ring of interlocking stainless steel panels with two entrances on opposite sides of the plaza. Inside the waist-high wall is a narrow walkway offering an open dimension between cold steel and rippling water, a simple labyrinth without a set purpose or destination.