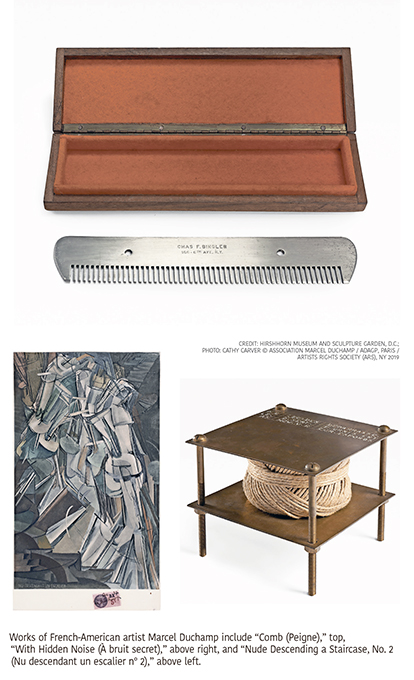 At its heart, is art an object or an idea?

But what happens when a porcelain urinal or a wood hat rack or a steel comb become art simply because the artist says it is so? That shocking (and confusing) break from long-held artistic traditions began with Marcel Duchamp, whose long career arced across various art movements without fully embracing any of them. His “readymades” — everyday mass-produced products that became art if you let them — influenced generations of artists through the birth of conceptual art and the use of utilitarian found objects.

Throughout his career spanning more than 50 years, Duchamp reveled in confusing people, often leaving viewers floundering to find some meaning in his work or angry that it didn’t make sense. The French-American artist dodged and weaved, contradicting himself while tossing puns into artwork titles. In Duchamp’s world, you find your own meaning or nothing at all.

The Hirshhorn Museum explores Duchamp’s legacy in “Marcel Duchamp: The Barbara and Aaron Levine Collection” featuring more than 35 readymades, paintings, sketches and other work by Duchamp that were gifted to the museum by the Levines. The Hirshhorn, which previously had only one work by Duchamp, now ranks among the Philadelphia Museum of Art and the Museum of Modern Art with prominent public collections of Duchamp’s work. The Levine collection, acquired over more than two decades, also includes letters and working notes by Duchamp along with portraits of him by Man Ray, Diane Arbus and others.

Duchamp’s career wasn’t always illustrious and was shaped by some early rejections that made him suspicious of the egotistical and commercial trappings of the art world. Born in France in 1887, Duchamp was embarrassed when he was asked to remove his Cubist-inspired painting “Nude Descending a Staircase, No. 2” from the Salon des Indépendants in Paris in 1912. The organizers didn’t think the repetitive fractured bodies that shift fluidly into each other really looked like a nude descending a staircase because it didn’t fit their tradition-bound representational view of painting. But when the work was shown a year later in the influential Armory Show in New York, the controversy surrounding it cemented Duchamp’s reputation as an iconoclastic provocateur. A 1937 collotype of the original oil painting is featured in the Hirshhorn exhibition.

After moving to New York in 1915 to avoid World War I, Duchamp tested the commitment of the newly established Society of Independent Artists to show any work in a jury-free exhibition in 1917. Duchamp, who helped organize the show, anonymously submitted a porcelain urinal titled “Fountain” that was signed “R. Mutt” after he bought it from J.L. Mott Iron Works in Manhattan. It also was a step over the line for the exhibition leaders, who broke their own rules and hid the urinal behind a partition, prompting Duchamp to quit from the society in disgust. The original “Fountain” was lost but a photograph by Alfred Stieglitz was featured at the time in “The Blind Man No. 2” journal, a copy of which is on view at the Hirshhorn.

Duchamp’s readymades became influential for testing the bounds of art, or “anti-art” as it was championed by Duchamp and the Dada movement. “My idea was to choose an object that wouldn’t attract me either by its beauty or its ugliness, to find a point of indifference in my looking at it,” Duchamp said in a 1966 BBC interview. “It’s hard and difficult when after a while it becomes very interesting and you can like it, and the minute I liked it, I would discard it.” 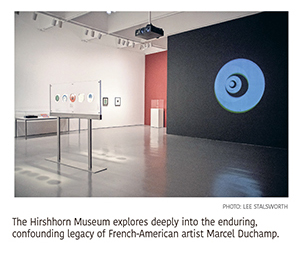 The Hirshhorn exhibition features several readymades, including 1964 editions of Duchamp’s 1916 “Comb (Peigne)” and his 1917 “Hat Rack (Porte-chapeaux).” These later editions make the definition of art, or anti-art, even blurrier when it comes to readymades. Is an edition of eight hat racks that Duchamp deemed to be art in 1964 any different from the original hat rack in 1917, other than the price tag attached by the art world? What if it was an edition of 1,000 hat racks? Does the number make them less important even if they are all still just identical hat racks? What if Duchamp bought a factory and cranked out thousands of hat racks and sold them all at a mark-up after saying they were art? When does the idea of art as an idea reach the preposterous or absurd? I think Duchamp would have laughed at the questions.

Unlike some artists who produce the same body of work for their entire careers, Duchamp kept pushing forward, experimenting with optical art in his Rotoreliefs, disks with colorful spiraling designs that created spinning optical illusions. He collaborated with May Ray on a 1926 film titled “Anemic Cinema” featuring the spinning disks.

In the 1920s, Duchamp abandoned painting and slowly withdrew from the art world to play chess, which he said “has all the beauty of art” but is “purer than art in its social position” because it can’t be commercialized. However, he kept making art in private and later emerged into the spotlight as his work gained prominence and influence in other artists’ work, such as Robert Rauschenberg’s “combines” and Andy Warhol’s Campbell’s Soup cans. But through it all, Duchamp was still ambivalent about art to the very end.

“I don’t care about the word ‘art’ because it’s been so discredited. I really want to get rid of it. There is really this unnecessary adoration of art today,” he said in a 1966 BBC interview two years before his death. “This is a difficult position because I’ve been in it all the time, but I still want to get rid of it. I cannot explain everything I do because I do things or people do things and don’t know why they do it.”