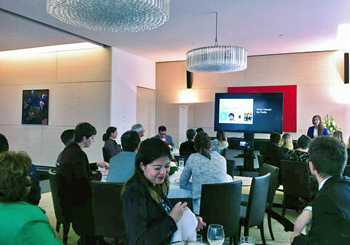 “The saying goes that if you’re not on LinkedIn, you don’t exist.” So began Swiss Ambassador Martin Dahinden’s generous introduction to “LinkedIn for Democracy,” the Digital Diplomacy Coalition’s latest workshop, hosted at his residence.

In the several years since the concept of digital diplomacy first entered the global mainstream, Twitter and, to a lesser extent, Facebook, have dominated the discussion. LinkedIn — the professional networking version of Facebook that began in 2003, a year before Facebook’s launch — has been largely left out of the conversation. And as was reiterated in the “LinkedIn for Diplomacy” workshop, that’s largely for good reason.

Despite reportedly having over 350 million users, the platform has become known as the place where people you don’t know endorse you for skills you don’t have. Like many people, I’ve had a LinkedIn profile for more than a decade and have frequently wondered quite what to do with it. I turn to Twitter first for information and sources, and while I’ll occasionally post an article on LinkedIn, I’ve found the platform increasingly cluttered as it attempts to do too many things for too many people.

The Swiss Embassy in D.C. recently hosted the workshop “LinkedIn for Democracy,” organized by the Digital Diplomacy Coalition.

In the past several years, what was once considered to be a business prerequisite seems to have struggled with an identity crisis: Is it a blogging platform, job board, digital contact index or a forum where people turn for news and information? A new inbox design, a new contacts dashboard, which makes it more difficult to actually locate a particular connection, and what appears to be a new search algorithm all make basic functions more difficult — and seem to be taking the website further and further away from relevance. For job seekers, the site no doubt continues to be a valuable resource, but what about diplomats?

Chatter before the workshop confirmed my suspicions that many people in the audience of approximately 40 diplomats already had a profile. In some cases, they also managed a public page for their embassy, but these pages sat mostly dormant. Most of the people I spoke with were interested and eager to learn how to make the most of their LinkedIn presence, and begin to use it as a new tool in their digital diplomacy strategies.

Unfortunately, they were disappointed.

The LinkedIn representative, Amanda Canvasser Goldberg, provided the audience of diplomats and experienced digital practitioners with a beginner’s guide to using the site, including how to create a profile and share a status update. (This, after she had polled the room to determine that most of us did, in fact, already have profiles.) The 30-minute presentation didn’t address diplomacy, foreign governments, embassies or why this experienced audience who had largely ignored LinkedIn should reconsider their strategy.

When I asked how diplomats could use LinkedIn specifically for digital diplomacy, she replied, “It’s really how you leverage your own personal profile and your own personal identity on behalf of that network.”

Which can be said for any form of communication, anywhere, at any time.

As someone who takes LinkedIn’s training for journalists each year to earn the complimentary upgrade, I was surprised by the lack of information and that such a basic course would be taught to this particular audience. The journalists’ course, spearheaded by a higher-ranking member of the training team, includes very specific instruction on tools journalists can use to locate trending topics, find experts, save searches using keywords and follow influencers. A similar presentation, taught by someone who understands the functions of embassies, would have been more appropriate and, perhaps, even vaguely useful. 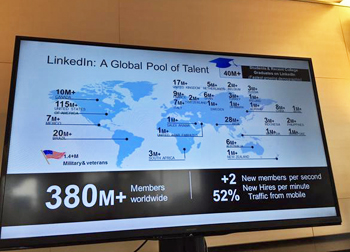 Lovisa Williams, the global digital strategist at the State Department and a board member of the Digital Diplomacy Coalition, asked Goldberg for tips on how embassies could manage their public pages, and how that would differ from the strategies individuals use on their personal profiles. Goldberg responded that users could create multiple accounts using different email addresses.

“No. It wasn’t useful,” Williams later said when asked about the presentation. “It would have been better if we had heard more about how to leverage company pages for the diplomatic mission. Examples of who is doing it well and poorly would also have been useful. The presentation was too general and at the beginner level. We spent too much time on the personal profile. Another area that would have been interesting to hear more about is the blogging and groups feature. Market penetration and demographic info of LinkedIn both domestically and overseas would also have been useful.”

While the presentation was an unabashed waste of time, the gathering itself wasn’t. Like most Digital Diplomacy Coalition functions, the audience was comprised of experienced digital practitioners and boasted a mix of new members and regulars, which made for insightful post-event networking.

The luncheon also was a farewell to Salome Ramseier, the head of communications at the Embassy of Switzerland, who, after nearly five years in Washington, will be returning to Zurich. Ramseier has been an active member of the Digital Diplomacy Coalition and was instrumental in creating and managing the Swiss Embassy’s digital presence.

Digital Diplomacy Forum is a monthly column by Molly McCluskey on how technology is reshaping 21st-century statecraft. The author is on LinkedIn, but prefers to connect via Twitter (@MollyEMcCluskey).