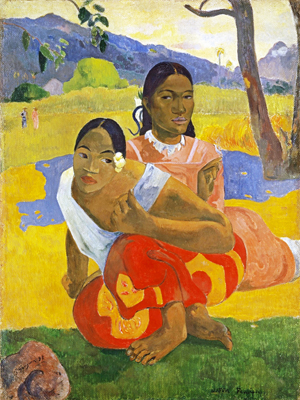 Paul Gauguin’s “NAFEA faaipoipo (When Will You Marry?) is among the 60 masterworks from Switzerland that are now on display at the Phillips Collection.

In size, Switzerland is small — California is about 10 times bigger. But in other areas, the pristine Alpine country punches above its weight. Its 8.2 million inhabitants enjoy a GDP of nearly $690 billion thanks in large part to the country’s reputation as a banking hub. But the Swiss excel in another domain: art.

The city of Basel bills itself as the cultural capital of Switzerland. It was also the longtime home of Dorothy Kosinski, a Swiss citizen and director of the Phillips Collection.

Duncan Phillips, the D.C.-based art collector who founded the museum, played a pivotal role in introducing American audiences to modern art. Apparently, he also had two kindred spirits in Switzerland.

Phillips’s namesake is now hosting an exhibition of those two pioneering Swiss collectors, both from Basel, who, like Phillips, broadened the definition and appreciation of modern art.

“Gauguin to Picasso: Masterworks from Switzerland, The Staechelin and Im Obersteg Collections” brings together more than 60 masterpieces from the mid-19th and 20th centuries by 22 world-famous artists. Some of the works have never been seen in the United States before, while others were exhibited only once in Fort Worth, Texas, a number of years ago.

The gem — news and money wise — is Paul Gauguin’s “NAFEA faaipoipo (When Will You Marry?)” from 1892, the time of the artist’s first trip to Tahiti. The painting was reportedly sold to a Qatari collector for a phenomenal $300 million. The Phillips is featuring the piece, from the Rudolf Staechelin Collection, before the new collector takes ownership of it.

Like Phillips, Rudolf Staechelin (1881-1946) and Karl Im Obersteg (1883-1969) had an eye for the modern, championing the work of impressionist, post-impressionist and School of Paris artists.

The exhibition — with one masterpiece after another scattered throughout — is a curious mix of startling color and personal affinity, illustrating the collecting impulses of two men whose tastes resembled those of Phillips. The resemblance isn’t just in the art itself. The display has constructed two rooms featuring similar works collected by Phillips to spark a conversation. 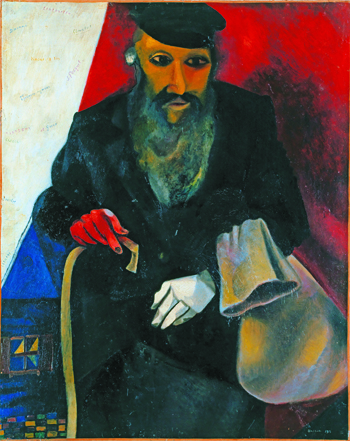 Though their tastes were similar, their methods varied. According to the museum, Staechelin worked exclusively with dealers, amassing a valuable collection in a short span of time. In contrast, Im Obersteg was driven more by his personal friendships with the artists, building up his collection over a lifetime. He liked to collect multiple works by a single artist and supported certain artists, such as Russian Alexei von Jawlensky, when they confronted financial difficulties — as did Phillips occasionally.

The Gauguin, acquired initially by Staechelin, is astonishing, and not just for its price tag. It’s a big, compelling and entirely characteristic work — a portrait of two native Tahitian women, one in the background, dressed demurely, the other in bright colors, offering up her face with curiosity and not a little invitation. No doubt it is a major attraction in the show, not least for its impending departure to a mysterious private collector.

As a whole, the exhibition is nothing less than a treasure trove of artists most of us know and love — among them, Pablo Picasso, Vincent van Gogh and Marc Chagall — and those we don’t, including Swiss artist Ferdinand Hodler and von Jawlensky.

Hodler’s work, predominantly images of his dying lover Valentine Godé-Darel — whom he captures vertically up close and supine in bed and as a corpse in haunting fashion — is powerful and magnetic. Von Jawlensky is represented in a variety of fashions as a spiritual abstractionist whose work finds some parallels with Mark Rothko’s dramatic coloring.

You’ll also find two van Goghs here that you’ve never seen: “The Garden of Daubigny,” a landscape punctuated by the artist’s signature intensity and thick brush strokes, and the other a startlingly uncharacteristic portrait of the “Head of a Woman.” 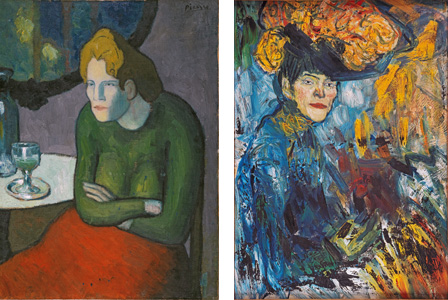 Pablo Picasso’s “The Absinthe Drinker,” left, and “Woman at the Theater” are featured in “Gauguin to Picasso: Masterworks from Switzerland.”

The exhibition seems carefully organized around themes and emphasis. The room containing the Gauguin is practically a shrine to the centerpiece painting, while a wall showcasing Paul Cézanne landscapes along with works by Camille Pissarro is distinctive for its outdoor motif. There are also rare pieces by Modigliani, Renoir and Picasso, including “The Absinthe Drinker” (has there ever been an even moderately happy absinthe drinker?”) and “Woman at the Theater” (a bit garish but energized).

Most dramatic of all is a series by Chagall, usually known for his impish, colorful paintings of Shtetl life in the Jewish villages of Eastern Europe. Here he’s represented by the famous “Jew in Black and White”; “Jew in Green” and “Jew in Red” — large, powerful portraits that offer sharply vibrant depictions of three rabbis.

Phillips Director Dorothy Kosinski, who is also the exhibition co-curator, has a personal stake in the show, being a Swiss citizen, longtime resident of Basel and frequent visitor.

“I am thrilled by the opportunity to bring such important and spectacular works to Washington — pieces that don’t normally travel,” she said. “The exhibition shows the perspicacity of these two very important 20th-century patrons and supporters of modernism, and dovetails nicely with the history of collectors in this country, including our own founder, Duncan Phillips.”

Gauguin to Picasso: Masterworks from Switzerland, The Staechelin and Im Obersteg Collections

Gary Tischler is a contributing writer for The Washington Diplomat. Anna Gawel is the managing editor.