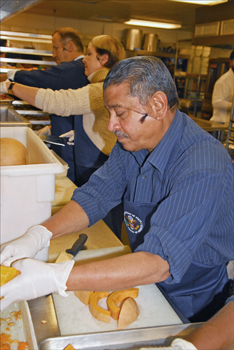 The two diplomats are normally seen at cocktail parties, not in kitchens. But on Nov. 21, they — along with representatives from Egypt, Sri Lanka, Switzerland and a dozen other countries — spent two hours slaving away over hot stoves and cutting boards. All wore mandatory hairnets and navy-blue aprons bearing the State Department’s official seal, and all had been briefed on proper hand-washing techniques.

The pre-Thanksgiving event was organized by the State Department’s Office of the Chief of Protocol as part of a daylong “Share the Season” showcase — the first of its kind — to give the diplomatic corps a firsthand look at local community service projects and donation drives that support those in need during the holiday season. It took place at DC Central Kitchen, a nonprofit located a few blocks from Union Station, next to a homeless shelter. Operating on an annual budget of $11 million, its staffers and volunteers prepare 5,000 meals a day for poor people throughout the Washington metropolitan area. DC Central Kitchen, founded in 1989, also offers culinary job training, local farm partnerships and other programs to break the cycle of hunger and poverty.

“We try to provide the most healthy, nutritious food we can, and bringing as many locally grown products as we can into the equation, like winter squash from a farm in Queen Anne’s County,” said Dan Hall, director of administration, in a welcome speech to the visiting diplomats before sending them off to their various work stations.

“We pick up extra crops that won’t be harvested,” said Hall, explaining how DC Central Kitchen functions. “We also connect with local farmers to buy seconds, or stuff that won’t sell at the highest prices. So far this year, we’ve recovered 630,000 pounds of food that otherwise would have been thrown out.”

Wendy Spencer, CEO of the Corporation for National and Community Service, used the occasion to tell the gathered ambassadors and their spouses about AmeriCorps, the domestic equivalent of the Peace Corps.

“Many Americans want to serve their country. They really can’t find themselves traveling overseas, but they want to do something related to volunteer service,” she explained. “That was the idea of AmeriCorps: to address problems here like helping people get out of homelessness and find jobs.”

Spencer’s agency, which runs AmeriCorps, the Senior Corps and Social Innovation Fund, employs 600 staffers and operates with $1 billion in federal funds and another $850 million in matched funds. It has offices in every state and this year marks its 20th anniversary. She said 80,000 AmeriCorps members “give a year of their lives to service” — some full time, some part time. She noted that those who volunteer are 27 percent more likely to find jobs later in life.

“We also have 360,000 senior corps volunteers, age 55 and up, who are foster grandparents, working alongside kindergarten teachers or volunteering as senior companions for the elderly,” she noted.

Earlier that afternoon, at a nearby roundtable, some 40 ambassadors attended a lunch co-sponsored by local nonprofits like Martha’s Table, Manna Food Center and A Wider Circle. There, diplomats learned how their embassies can organize their own community service projects to fight hunger, homelessness and illiteracy.

U.S. Agriculture Secretary Tom Vilsack spoke of the positive role volunteerism had on his own career.

“I started out life in a Catholic orphanage after my birth mother was not able to raise me,” he told the diplomats. “I was fortunate enough to go to college, got married and moved to my wife’s hometown: Mount Pleasant, Iowa. I realized I needed to do something to establish an identity, when the opportunity presented itself to lead an effort to raise money to build athletic facilities for our children.”

Vilsack explained that “when the mayor of our town was tragically shot and killed during a city council meeting, I ran for mayor. That mayor’s job led to an opportunity to be state senator, then governor, then secretary of agriculture — and it all started with volunteerism. Had I not engaged in that program, I would probably have become a successful lawyer, but I would never have had the opportunities I’ve had in my lifetime.”

The U.S. Department of Agriculture chief told the assembled ambassadors and other dignitaries that his agency has accumulated nearly 9 million pounds of food through the establishment of 1,900 “people’s gardens” around the United States and at U.S. embassies overseas.

“Sadly, in every single country — including this one — there are significant populations in need. In America, 17 million children live in food-insecure homes. It’s a hard statistic for the secretary of agriculture to repeat, but it is a reality,” said Vilsack.

“You can help make their day just a bit brighter by the work that you do. They, in turn, might learn something about the country you come from,” he said. “You are obviously a conduit through which information about your country is transmitted to Americans. Thank you and your spouses for the important role you play in educating America about the world in which we all share.”

Like DC Central Kitchen, Florida-based Food For The Poor Inc. fights hunger — though on a vastly bigger scale. 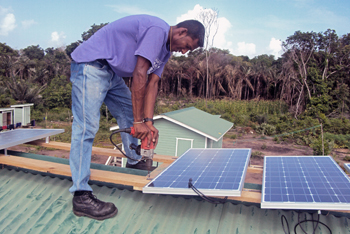 Photo: Food For The Poor

A worker installs solar panels on the roof of the community center in an Amerindian village in Guyana. The solar panels will charge a battery storage unit, which will be the power source for the computers distributed by Food For The Poor for students and their families living in the remote village.

Ranked by the Chronicle of Philanthropy newspaper as the largest international relief and development organization in the United States, Food For The Poor has an annual budget exceeding $900 million. It boasts 1,200 employees, including more than 300 just at its sprawling 160,000-square-foot headquarters in Coconut Creek, Fla. Its interdenominational Christian ministry serves the poorest of the poor in 17 countries throughout the Caribbean and Latin America.

“We’re feeding over 2 million people a day, six days a week,” said Robin G. Mahfood, the organization’s president and CEO. “These are not poor people, they are destitute people. What we’re seeing today are naked children with no clothes, no shoes and no food. We work in garbage dumps, we work with the homeless, we work with handicapped and mentally retarded people who are forgotten.”

Since its establishment in 1982, Food For The Poor has provided more than $10 billion in aid to poor people throughout Latin America and the Caribbean — with half that just in the last five years. According to Charity Navigator, the group maintains its operating expenses under 5 percent to ensure that more than 95 percent of donations go directly toward programs that help the poor.

Mahfood, speaking to The Washington Diplomat at length last month, keeps on the wall of his office a framed portrait of a homeless Jamaican man who receives food from the NGO every day.

“We’re not social workers,” he said. “We live by the gospel, we adhere to the gospel, and it’s because of the gospel we do what we do. And we work only through churches.”

Born in Detroit and raised in Jamaica, Mahfood attended a Jesuit school and was a soft drink and food executive for years. In 2000, he took the helm of Food For The Poor, which had been started by his brother Ferdinand, who resigned amid allegations he diverted money to two female employees with whom he was reportedly having an affair. Since that scandal, the family-supported charity has grown more than five-fold, with new management brought in to increase transparency.

Despite the explosive growth, Mahfood said the need is still overwhelming. “We could go into 10 more countries tomorrow but we don’t have the wherewithal. We can’t even cope with what we have. We work with one family to get out of poverty.”

Food For The Poor depends totally on donations, and its Christmas 2013 catalogue lets people “give a gift that will change a life.” For example, $24 provides 100 pounds of rice and beans for a poor family; $125 buys a solar-powered light kit; $3,200 builds a house with sanitation; $5,750 buys a fisherman a fiberglass boat; and $10,560 ships a tractor trailer full of food.

In Haiti, the rapid spread of cholera has complicated post-earthquake recovery efforts, so Food For The Poor financed the installation of 70 water chlorination systems, each of which provide 10,000 gallons a day of filtered, chlorinated water.

“I personally feel that if it weren’t for all these units, the cholera disaster would have been really tremendous,” Mahfood said. Since it began in October 2010, the cholera epidemic has killed 8,300 Haitians and sickened another 650,000, sparking riots against U.N. peacekeeping troops (a contingent of Nepalese peacekeepers has been widely blamed as the source of the outbreak) and a class-action lawsuit against the United Nations.

In Haiti and throughout the rest of the Caribbean, the high cost of electricity has also been a major contributing factor to poverty, Mahfood said.

“Here in America, residential customers pay about 10 cents per kilowatt-hour. In Jamaica, it’s 46 cents. Families cannot afford to pay their electric bills, much less a school or a hospital. It’s just ridiculous, so everybody’s trying to find alternatives.”

For this reason, Food For The Poor has purchased more than 6,000 solar-powered light kits for impoverished people in Nicaragua, Honduras, Jamaica, Haiti and Guyana. Each unit, imported from China, costs $125 and includes a solar panel, a battery, three light bulbs and cables for charging mobile phones.

“Many of these people live in the middle of nowhere, and half their problems come from bad sanitation and lack of light,” said Mahfood. “They’ve never had light in their life. They’ve never seen ice before. This is totally changing their lives.”