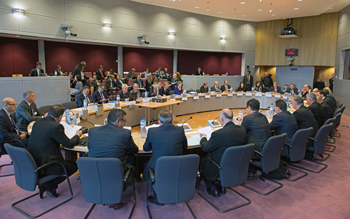 Across the Balkans, the accession of Croatia to the European Union last summer was greeted as a triumph, and an encouraging sign that countries in the once war-torn region could reach what formerly seemed like an unattainable goal.

Croatia’s breaking with EU tradition to join independent of other candidate countries also sent a message: that candidates could join when they had met all of the membership criteria, regardless of their neighbor’s progress (also see “Post-EU Croatia Experiences Growing Pains, and Compromise” in the November 2013 issue of The Washington Diplomat).

So who’s next in line to join the EU club? The bloc won’t be experiencing a major enlargement like it did in 2004, when 10 countries joined. And each of the candidate countries currently faces its own challenges along the path to membership.

Despite its progress on EU accession, Iceland ceased talks in late 2013, having largely recovered from its banking crash in 2008. Macedonia (FYROM) has been at loggerheads with Greece over its name for more than 20 years. Serbia refuses to recognize Kosovo’s independence, despite reaching a recent EU-brokered deal to normalize relations. Turkey’s occupation of Cyprus, an EU member, has kept its EU aspirations at bay — along with wider worries in the bloc about absorbing a Muslim nation of 80 million. Three potential candidate countries — Kosovo, Albania, and Bosnia and Herzegovina — round out the list, and bring their own troubles to the mix.

“Some people had a sense that the EU wouldn’t expand any further after Croatia,” said Serbian Ambassador Vladimir Petrovic. “That with the [euro] crisis, countries wouldn’t want to join.”

Representatives from the European Commission and Bosnia and Herzegovina meet for a high-level dialogue on the accession process in Brussels in October 2013. Croatia’s recent accession to the European Union gave many of its Balkan neighbors hope that they too could join the bloc.

And yet the EU has agreed to open accession talks with Serbia, despite its ongoing feud with Kosovo, which declared independence from Serbia in 2008, nearly a decade after NATO intervened to stop the bloodletting between Kosovo’s ethnic Albanians and Serb forces. Although Serbia still refuses to recognize Kosovo’s independence (along with a handful of EU members), Belgrade is keen to join the bloc, in part to turn around its sluggish economy and high unemployment.

Serbia has worked with EU authorities to turn war criminals over to The Hague, and it inked an accord last April to cede de facto control of a Serb enclave in northern Kosovo (in return, the 50,000 or so Serbs will be granted autonomy from the central Kosovar government). Although skirmishes occasionally erupt between the two sides (most recently during Kosovo’s local elections in November), they’ve agreed not to stand in the way of each other’s pursuit of EU membership.

In fact, the Balkans represent the next frontier in EU expansion, with the field narrowed to three candidate countries: Serbia, Montenegro and the Former Yugoslav Republic of Macedonia (FYROM), all of which belonged to the former Yugoslavia (like current EU members Slovenian and Croatia).

However, Serbia and Macedonia both have troubled relationships with their neighbors that could prove detrimental to their accession hopes.

Macedonia was granted permission to begin accession talks in 2009, and the European Commission has repeatedly recommended that those talks begin, but a longstanding dispute over its name with neighboring Greece has stalled the country’s EU aspirations. Greece argues that the name Macedonia implies territorial rights over the northern Greek province of the same name.

Despite progress in key political and legislative areas, Macedonia won’t be able to continue talks until a permanent bilateral agreement can be hatched with Athens, which has taken issue with Macedonia’s name since its independence in 1991.

Georgios Tsarouchas previously worked with the Delegation of the European Commission to the United States and as an advisor to the Greek government.

“Europe generally is much more careful now,” Tsarouchas said in regards to the EU accepting Macedonia before the name issue is resolved. “They have so many problems — they don’t need more.”

That means it will be a race to the finish among the remaining two candidate countries. On the streets of Belgrade this summer, talks of Croatia’s accession inevitably fueled impatience over Serbia’s prospects. It’s an impatience echoed recently by Ambassador Petrovic.

“We strongly feel that we are the next country to join the EU,” Petrovic told us. “I think we had some political problems, Kosovo to name one, and problems with The Hague tribunals. But in terms of technically being capable, I think Serbia has been a strong candidate for 10 years now and I feel the institutions are pretty strong, and we’re going to move really fast.” 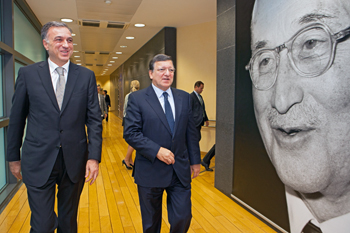 Filip Vujanovi, president of Montenegro, left, and José Manuel Barroso, president of the European Commission, walk by a large photograph of Jean Monnet, a French diplomat who’s considered by many to be a chief architect of European unity, during a meeting on Montenegro’s accession to the European Union and future EU enlargement.

Despite progress in relations with Kosovo this year, “we were told from the EU that recognizing Kosovo is not one of the things [the EU] would ask of us,” Petrovic said. “We are not planning to recognize their unilateral declaration of independence, but we want to fix this problem through negotiations, through diplomacy in the European spirit.”

He added: “It wouldn’t be a big deal for Europe to get [all of] us in even next year.”

In the event that the European Commission doesn’t share Petrovic’s vision of admitting the Balkan countries at once, Montenegro is the most logical candidate to join the EU, according to Luka Orešković, a Harvard University researcher focusing on European affairs.

“Institutional reform is definitely one of their hurdles, but they have one of the most stable political environments in all of Eastern Europe. They have very experienced leadership. It has very clear goals. And it also has the will to join the EU,” Orešković said. “To some extent, they’re the only option.”

But Montenegrin Ambassador Srdjan Darmanovic refuses to speculate on the great race. “We very much support our neighboring countries to go as fast and be as successful as they can,” he said. “We would like to hold a torch of the negotiations in our hands and to be the most successful one, but we very much realize how important it is for the region to be part of the united Europe, whole, and without exceptions. So we very much salute and praise and are happy with the success of any countries.”

Despite Petrovic’s confidence that all of the Balkan countries could join the EU within the next year, Darmanovic says Montenegro could be ready by 2020. “It is not only about the membership; it is about the process. You change your society very much in the process. So, preparing your society or your country to be a member, you are changing the basics of your economy, democracy, rule of law, even other sectors. Transforming society in this process is vital. It is crucial.

“As much as the process is important, at the end of the road is membership,” Darmanovic added.

But for other countries, it seems to be the end of the road for membership, at least for now. Following its financial meltdown in 2008, Iceland applied to join the EU in 2009 and seemed to be a shoo-in. The country, which had been fast-tracked to join the EU, participates in NATO, the European Economic Area, the Schengen passport-free travel area and European Free Trade Association and already follows a number of EU laws.

But in September, Icelandic Foreign Minister Gunnar Bragi Sveinsson dissolved the country’s EU negotiation committee. Iceland, whose economy is now on the mend, had long clashed with EU officials over fishing quotas and harbored lingering bitterness about the union’s involvement in the banking collapse that struck Iceland particularly hard.

But the road to EU membership has been bumpy and seemingly never-ending for one country in particular. Long considered the wildcard among the EU candidate countries, Turkey reopened negotiations with the European Union in early November after a hiatus of more than three years. Talks had initially stalled due to Turkey’s occupation of Northern Cyprus and suffered again after the Turkish government’s harsh crackdown on protestors in May. Negotiations between the EU and Turkey, which began in 2005 (18 years after Ankara first applied), have also been slowed because of reservations in France, Germany and elsewhere about being able to integrate the large, Muslim-majority nation into Europe, which is predominantly Christian.

Orešković of Harvard says that regardless of Turkey’s viability as a candidate, the negotiations themselves serve a critical function.

“It is not clear that it is a feasible option for Turkey to join at all. But negotiations can bring about normative measures to the candidate that make them a better neighbor,” Orešković said. “The process of EU talks has enabled it to institute a lot of change, from minority rights to legal reforms to economic reforms to fiscal independence to political reforms.”

He added: “Granting a country member candidate status can be a very strategic foreign policy tool.”

Tsarouchas said that while it’s unlikely Turkey will join the EU in the current climate, Europeans will soon have to face a startling reality.

Moreover, Turkey is not the economic backwater it once was. Now, it’s a dynamic powerhouse, while the EU’s economy has stagnated.

“So, you keep Turkey at the door, and hope the timing works,” Tsarouchas said. “But most certainly, Turkey will not be the next country to join.”

Montenegrin Ambassador Darmanovic, whose country could very well be the 29th EU member, said that there will continue to be challenges throughout the European enlargement process. And whether the 29th member joins alone, or with its neighbors, the most important element is the strength of the union overall, and that is the responsibility of all its members, and member candidates.

“Maybe the European Union can borrow the slogan of the U.S. founding fathers,” he said. “Let’s try to do our union more perfect.”