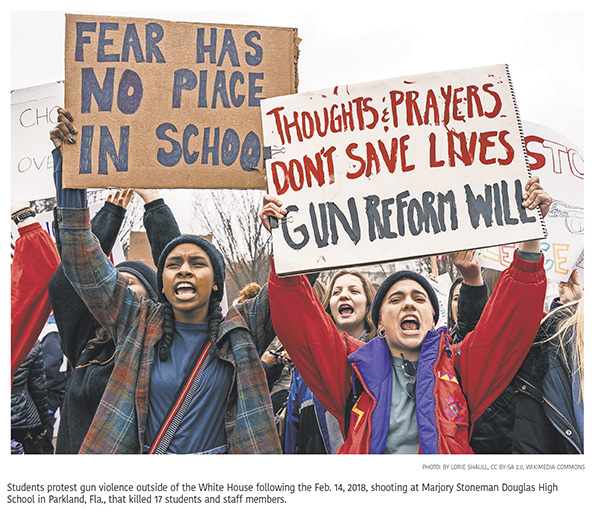 Safety drills have long been as much a staple in school as math and language classes. Few of us think twice about fire or tornado drills, letting muscle memory lead the way when the siren goes off. A newer drill, though – the lockdown – is not yet part of the norm. As a result, it’s a source of anxiety for some students, teachers and parents alike — an in-your-face reminder of the potential for tragedy.

Seventy-five percent of Generation Z – people ages 15 to 21 – cited mass shootings as a significant source of stress, and 72 percent said the same about school shootings or the possibility of them, according to the American Psychological Association’s 2018 Stress in America survey, released Oct. 30. About seven in 10 Millennials report similar feelings.

More than half – 56 percent – of Gen Zs who are still in school say they experience stress at least sometimes when considering the possibility of a shooting at their school and 21 percent say that possibility is a source of stress either constantly or often. Nearly 75 percent of parents also called school shootings a significant source of stress.

The Pew Research Center found similar results when it surveyed 13- to 17-year-olds and their parents about school shootings. Fifty-seven percent of the teens who responded said they worry about the possibility of a shooting happening at their school, with a quarter saying they are very worried. Meanwhile, 63 percent of parents said they are worried, too.

When it comes to what can be done to prevent this kind of violence, a majority of teens in the Pew survey supported improved mental health screenings, preventing people with mental illness from purchasing guns, banning assault-style weapon bans and using metal detectors in schools. A smaller percentage saw allowing teachers and school officials to carry guns in schools as a more effective approach.

Students and parents have good cause for concern. As of Nov. 29, more than 219,000 students had experienced gun violence at school since the 1999 Columbine High School shooting, in which 13 died, according to data The Washington Post has collected. In the first 21 weeks of 2018 alone, 23 school shootings occurred, including the Valentine’s Day massacre at Marjory Stoneman Douglas High School in Parkland, Fla., where 17 students died.

School shootings may seem like a new source of violence, but they’re not. The first one dates to July 1764, according to K12academics.com. Almost 100 years would pass before the next one was documented to have happened in 1853, but they became fairly frequent until the first three decades of the 20th century in the United States, increasing sharply in the late 1980s. The deadliest year on record was 2006-07, when 38 people died from school shootings, according to the K12 website.

But it was Columbine, witnessed on live television, that spurred school districts nationwide to begin implementing plans to protect students and employees in active-shooter situations. The lockdown drill was born.

Today, it’s a standard part of most school districts’ emergency preparations. Fairfax County Public Schools (FCPS) in Virginia, which serves more than 188,000 students, defines a lockdown as “security measures taken to protect against intruders” who are inside the building or on campus. An actual lockdown involves having students stay in place with a teacher or staff member, locked in classrooms in a place outside potential lines of fire and unobservable from the outside with the lights off, window coverings down and door windows obscured.

In July, the Fairfax County School Board approved nearly $3 million in funding for eight positions to augment security training in schools and 18 positions for psychologists and social workers. This came in response to a June report that called for the hiring of mental health professionals at all county middle schools and some elementary schools. (All county high schools already have full-time psychologists and social workers.) 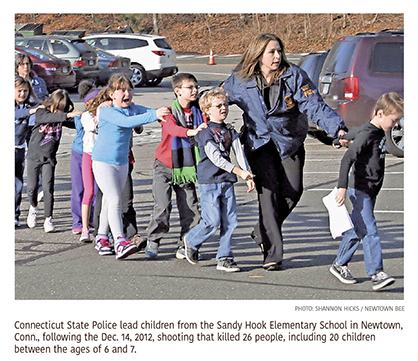 District of Columbia Public Schools (DCPS) instructs students to report to the nearest available classroom if they’re in the halls when a lockdown is declared, and personnel are asked to display the Emergency Procedures Guide cover in their door window. The red side out means assistance is needed, while green means all-clear. According to the Wilson High School website, DCPS requires two lockdown drills per year.

For the 2018-19 school year, the Code of Maryland Regulations requires all public schools and facilities to conduct seven emergency drills, including at least one lockdown and one active-shooter drill.

An Important Line of Defense: Parents

The idea behind lockdown drills is to keep students – and adults at the schools – safe, but for some children, these drills can do more to cause anxiety than alleviate or prevent it. I know because my daughter had trouble falling asleep for nights after a lockdown drill when she was a kindergartner at a Fairfax County school.

Although the teachers never told her class that someone might enter the school with a gun and in fact tried to make it into a game, hiding in a corner and staying quiet as the 28 or so of them huddled together, my daughter sensed that something was off. She had asked me what the lockdown drills are really for, and I took a cue from the teachers, reiterating that they are simply practicing ways to be safe, much like a fire drill. But fire drills didn’t give her nightmares.

Now in third grade, my daughter is less affected. She still reports that a lockdown drill happened, but as far as I know, she sleeps soundly. It’s becoming part of the routine. The drills have never bothered her younger brother, a first-grader now. Perhaps he’s less perceptive, or perhaps hearing her discuss them and my reassurances eliminated the fear factor before he got to elementary school.

Although I wasn’t surveyed, I count myself among those parents who are very worried about a school shooting directly affecting my children. I’m sad that lockdown drills exist. But I watched on TV as the teen with a bloody stump for a foot fell out of a Columbine High School window and I know why they exist. My youngsters don’t yet have the emotional maturity to reconcile the fear with the rationale.

That’s why a parent’s response to lockdown drills is one of the most crucial aspects to helping children deal with them, experts say. Children are quick to pick up on grownups’ stress. “Right now, this topic is brand new for us, so I think a lot of adults – parents and educators – feel upset and frustrated and sad and angry that this has to be part of the school day,” said Dr. Matthew Biel, chief of child and adolescent psychiatry at MedStar Georgetown University Medical Center. “My hunch is kids are picking up on those feelings.”

“Parents need to make sure to not elevate the emotional damage of these experiences for the kids by asking 100 questions about the drills,” Biel added. When you do that with a lot of emotion, kids start to wonder more and get scared.

Parents who feel anxious should seek help from one another or trained professionals. “Adults need to be supportive among each other – parents supporting parents, teachers supporting teachers, school leaders supporting school leaders and so forth – so that when it comes time to communicate with the kids, our own sense of distress is ameliorated so that we can be calm and accurate but also reassuring,” he said.

As children get older – often between the ages of 12 and 14, although there’s no rule about emotional readiness — and become more aware of shooting incidents, they may want to talk to their parents about it, which allows for more emotional transparency from the adults. Teens will “welcome parents showing a controlled degree of vulnerability,” Biel said. Knowing that parents share their worries and deal with them responsibly can alleviate anxiety. “If your kid is asking why those things happened or if we’re in danger, I think it’s really important to respond to those things.”

For youngsters, beware of overexplaining. Call lockdown drills “safety drills,” lumping them in with fire and natural disaster preparedness practices. “It’s not necessary to have any more explanation than that,” Biel said. “The message should be safety, safety, safety…. Safety is a positive term. It’s not a threatening term.”

The Role of Teachers and Schools 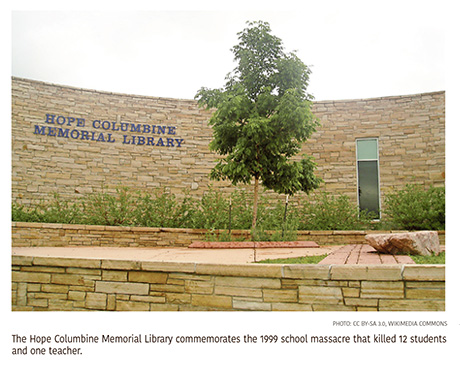 Just as the right amount of communication between parents and children can ease anxiety, the same is true for open dialogue among students, teachers and school administrators.

“I think kids look to adults to check that they’re safe, so the behavior and emotional state of the teachers and staff is really important in terms of presenting these drills,” said Randi Pochtar, a clinical assistant professor in the Department of Child and Adolescent Psychiatry at New York University Langone Health. “We want them to be calm and confident, reassuring, and really focusing this around safety.”

Schools can take several steps to create safe, effective and minimally traumatic lockdown drills. The National Association of School Psychologists (NASP) PREPaRE Workgroup has guidelines for schools as they prepare for lockdown drills. They say it is critical that drills align with students’ developmental levels and take into consideration past traumatic experiences, special needs and personalities — all of which can fluctuate with age. Schools should involve mental health professionals at every stage of planning, including during the drill in case a participant shows signs of stress, as well as after the event.

Lockdown drills are more likely to distress children and adults who have a history of anxiety or past traumas, so school administrators should communicate with parents and students before the drill takes place.

“Communication between parents and schools is really important and for schools to be getting feedback from parents, feedback from kids, about how the drills are going so that they can then take that information and incorporate it moving forward,” said Pochtar, who is also a child psychologist at the NYU Langone Child Study Center.

Lockdown drills don’t always cause negative emotions. For some children, repeatedly practicing ways to stay safe can feel reassuring. “Although there is little empirical research about drills, existing research suggests that drills implemented according to best practice can increase students’ knowledge and skills of how to respond in an emergency, without elevating their anxiety or perceived safety,” according to NASP.

Watching for Signs of Stress

Children – and many adults – have a tough time expressing the source of their anxiety. The youngest students especially might not link a lockdown drill to feelings of fear. Instead, their distress becomes apparent through behavioral changes, such as my daughter’s difficulty sleeping. Other changes to watch for include acting out, silliness, aggression, irritability, agitation, withdrawing and changes in appetite, sleeping or grades, Pochtar said.

If anything deviates from the baseline, parents should contact teachers and school psychologists, initiating that crucial chain of communication. It’s also important to use words such as “safety” often and euphemize the word “lockdown” by calling the practice a “hideout,” Pochtar said. The trick is “figuring out how to both protect the mental health of students while also balancing the importance of preparedness.”

Lastly, adults and students must remember that school shootings are, in fact, rare. “The odds of a student being the victim of a school-associated homicide are about 1 in 2.5 million,” according to NASP.

Of course, internalizing that can be easier said than done. As a parent, my logical brain understands how that’s reassuring, but emotionally, I still can’t wrap my head around it.

For my daughter, who still doesn’t have all, or even most, of the details about the need for lockdown drills, they’re already going from a scary unknown to just another part of any given day. Sometimes she goes to gym or art class, and other times she hides in the corner of her classroom waiting for the all-clear.