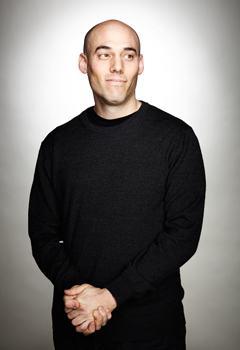 Early during the 2015 South by Southwest (SXSW) Film Festival, The Washington Diplomat had the pleasure of engaging in a lengthy one-on-one discussion with American writer-director Joshua Oppenheimer, a rising star. We met at the Omni Hotel, a calm oasis in the midst of the chaotic SXSW crowds invading downtown Austin. Friendly and chatty, the Texas native provided intelligent, comprehensive insights into his most recent documentary, “The Look of Silence,” considered to be a companion piece to “The Act of Killing,” his earlier hybrid doc.

Joshua Oppenheimer followed up his documentary “The Act of Killing” with “The Look of Silence,” which focuses on the victims of Indonesia’s anti-communist purge.

The latter’s success enabled Oppenheimer to imprint his mark on discerning viewers on the international film festival circuit and in art houses around the world. “The Act of Killing” relates a “true tale” about the Indonesian death squads that swept the country prior to the installation of longtime military dictator Suharto, committing brutal atrocities that purged Suharto’s communist political opponents and terrorized widespread swaths of the population.

Oppenheimer’s unorthodox and unforgettable documentary challenged these former death squad leaders to re-enact their mass killings in their favorite cinematic genre, including classic Hollywood gangster scenes. The filmmaker staged the death squad veterans’ confessions to their crimes against the backdrop of lavish musical routines, as in opera. Using their own words, the real-life killers themselves performed the song-and-dance numbers, an astonishing sight to behold. “The scene is so artificial that it becomes hyper-realistic,” remarked the innovative helmer about his unique blend of reality and fantasy.

Oppenheimer didn’t have to dig deep to convince the aging assassins to speak openly about their roles in Indonesia’s violent history. Many proudly recounted their part in the U.S.-backed purge and even today are celebrated as national heroes.

“They can walk around with impunity. They even boast about their actions, of which they are very proud,” the director said. “I had already lived in Indonesia for years and got to know my way around. I found a highly connected guy who wanted to talk plenty about what he’d done in the past. He introduced me to other powerful men, all from military backgrounds. I worked my way up the food chain.”

For “The Look of Silence,” however, Oppenheimer switches his focus from the killers to the victims, following the efforts of an optometrist to confront the men who killed his brother during the 1965-66 mass slaughter. 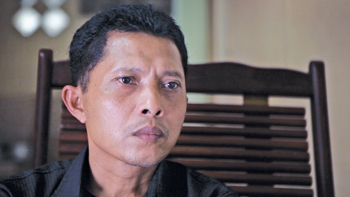 Adi is an optometrist who seeks to confront the death squad leaders responsible for his brother’s death during the 1965 Indonesian genocides in “The Look of Silence.”

“I don’t consider ‘The Look of Silence’ to be a sequel or even a follow-up to ‘The Act of Killing,'” Oppenheimer explained. “I view them as two parts of the same story. In fact, ‘The Look of Silence’ was the movie I had originally planned to make. I wanted to tell the stories of survivors of the reign of terror and their families. But the military placed widespread pressure on everybody not to talk.

“I turned my attention to the killers, who were eventually willing to talk on camera, to make ‘The Act of Killing,'” Oppenheimer continued. “By the time I completed the shoot, I was known to be close to the men who ran the country. At times, I embellished that reputation by putting spin on it.

“At that point, everybody assumed I had the blessing of the ruling class. Nobody got in my way when I went back to talk to the survivors, allowing me to shoot ‘The Look of Silence’ without hindrance.”

But the killings mark a dark chapter in history that many Indonesians, including the government, aren’t eager to revisit. The communist purge still enjoys widespread public support and Oppenheimer has not exactly been hailed as a hero in Indonesia for resurrecting the country’s past. He was only able to finish filming “The Look of Silence” because “The Act of Killing” hadn’t yet been released.

“Its production closed before ‘The Act of Killing’ had public screenings,” he said. “Now everybody hates me. It’s too dangerous for me to return to the country.”

“The Look of Silence” is now playing at Landmark’s E Street Cinema.