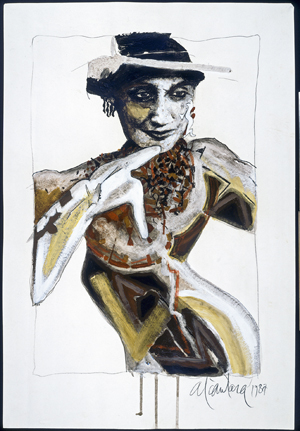 “The Marvelous Real: Colombia Through the Vision of its Artists” is a pretty marvelous title for an exhibition.

“Marvelous Real” suggests magic, transformation and eye-opening commentary on societal changes that are grounded in history yet inspired by ethereal forces. It evokes fluid works of art that are at once universal and specific, accessible yet elusive, mystical as ancient gold, confident as modern-day progress, and moody as only abstract art can be.

The latest exhibition at the Inter-American Development Bank Cultural Center contains 36 pieces — including paintings, drawings, sculptures and even a woven tapestry — by 24 artists, all from the IDB’s permanent collection.

The three dozen works traverse an impressive span of time: starting with pre-Columbian replicas; the reinvention of the territory from the 15th to the 19th centuries; the beginnings of contemporary art in the 20th century; the social transformations of the 1960s; the decentralization of art in the 1970s; and concluding with works done at the end of the century.

According to the cultural center, the display speaks to “the complexities, challenges and singularities of Colombia through the eyes of several of its most important artists.”

It certainly does have a lot to say about the country’s people, history and culture. But anyone looking for the final word on Colombia’s evolution, or an affirmative statement that defines this art as recognizably Colombian, is likely to hear silence.

“You cannot pin this exhibition down like this. Colombia is and has been and still is a work in motion,” said Félix Ángel, the former longtime head of the IDB Cultural Center who curated this exhibit. “There are influences here, influences that have been felt by many Latin American and Central American artists over similar periods of time, but express themselves differently.”

For example, Gonzalo Ariza’s spectacular Asian-influenced painting shines a light on Colombia’s vast landscape — from its misty mountaintops to its dense jungles. Ariza’s mesmerizing blues are an example of cross-cultural influences, Ángel said, “although not the usual one.” Ariza spent time in Japan and found inspiration in traditional Japanese landscape styles.

There is tremendous diversity in this exhibition, assembled in a way that’s eye-catching, powerful and even seductive. It’s a kind of roller coaster ride through Colombia with periodic stops to let you catch your breath and appreciate.

“Colombia has always had advantages — its geography is rich and fertile,” Ángel said, “and has a tremendous diversity of resources, and some of this accounts for the diversity in its art.”

History is another source of artistic richness — from the region’s ancient civilizations, to the arrival of the Spaniards and the cultural immersion and destruction that they brought with them, to revolution and democracy and the perils of both.

But the visual translation of these epochal changes can be subtle.

“Colombian art, while it can be startlingly real, is rarely overtly political — it’s not known for that — or directly deals directly with social issues or single trends, or any one thing,” Ángel explained. “It’s always many things. So you will find many artists who embrace along the way modernism, or abstract expressionism … or expressionism, or certain subjects.”

He added: “It is difficult to talk about a single Colombia. It never has existed as one, not even in pre-Columbian times.”

For Ángel, assembling the exhibition was both a matter of affinity and experience. A native of Medellín, he’s a noted artist himself who has presented more 100 exhibitions in Argentina, Colombia, Costa Rica, Dominican Republic, Ecuador, El Salvador, Panamá, Peru, Puerto Rico and the United States. His return to the IDB is a homecoming of sorts, having worked there since 1992 before stepping down as director last year.

“I suppose you could say it’s personal,” he said. “I know and have known some of the artists.”

Among the artists here — Edgar Negret, Fanny Sanín, Enrique Grau, David Manzur and Eduardo Ramírez Villamizar, to name a few — there’s no overt thread of commonality linking them. So it’s best just to immerse oneself and let the diversity of their art roll over you. Some strands will make themselves felt, lightly here, with a jaw-dropping shock there, and a few emotional nudges in between.

A centerpiece of “Marvelous Real” is the woven tapestry “Limestone Cliffs” by Olga de Amaral, a pioneer of textile art who layers fiber, paint, gesso and precious metals into shimmering unity. “Limestone Cliffs” — intricate, complex, dense — is a kind of lifetime achievement work that was commissioned by the IDB for the East Hall of its headquarters here in Washington, D.C.

Most of the artists on display at one time or another spent considerable time abroad — in America or Europe, oftentimes Paris.

Enrique Grau, for instance, studied in New York and Italy and became an important figurative artist with arresting works like “The Kiss” and “Rita,” both late 20th-century gems. His depictions of Amerindian and Afro Colombian figures earned him critical acclaim, but as the IDB catalogue explains, there is no underlying narrative connecting his work.

“In his compositions one finds a seemingly arbitrary association of figures and objects,” it says. “Yet behind the apparent superficiality, casualness and studied disarray, lie the most complex of desires and reasonings, whose outward manifestations take curious forms that defy human conventions.”

Along figurative lines, there’s also Oscar Jaramillo’s threatening, dark, untitled canvases filled with figures who look like they’re about to curse the viewer, or rob them of something.

Then there’s the modernist flair of Édgar Negret, whose resplendent sculpture “Sun” flashes with energy, or Maria de la Paz Jaramillo’s aquatint “I Would Like to Kill the Pain,” whose smudged style depicts a tentative, compliant dance that seems oddly off and wounding.

The exhibition sails across decades, movements, history and otherworldly phenomena. It’s a surreal voyage that is, yes, quite marvelous. So where did the inspiration for the exhibition title come from?

Cuban novelist Alejo Carpentier once wrote that “the history and the geography of Latin America are both so extreme as to appear fictional or even magical to outsiders.”

Fortunately, Ángel and his cohorts at the IDB make the vision a reality for Washington audiences.

The Marvelous Real: Colombia Through the Vision of its Artists