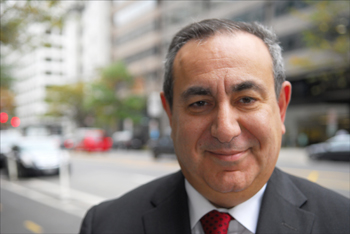 As a former top official at Malta’s Ministry of Foreign Affairs, Joseph Mifsud was a key member of the team that negotiated his tiny nation’s entry into the European Union. With only 420,000 inhabitants, Malta — a Mediterranean island twice the size of Washington, D.C. — is the smallest of the EU’s 28 states.

Ten years later, the multilingual Maltese diplomat has taken on a new challenge: to raise the profile of the London Academy of Diplomacy (LAD), a venerable institution located on Middlesex Street in the heart of London that’s home to some 150 students hailing from 50 nations.

“LAD is considered one of the best diplomatic academies in the world. We form part of the International Forum on Diplomatic Training,” Mifsud explained. “Besides teaching foreign languages, we teach how to be flexible in thinking, how to engage with the business community and how to act at different levels, from the highest level of diplomacy to more mundane people-to-people skills, as well as the ability to think strategically and geopolitically.”

Mifsud, 54, grew up in Malta and was educated at Italy’s University of Padua as well as Queen’s University in Belfast, Northern Ireland. He speaks nine languages: Maltese, English, Arabic, French, Spanish, Italian, Portuguese, Russian and Slovenian.

He spoke to The Washington Diplomat during a mid-November visit to the nation’s capital, following a lecture at American University on the topic of “Diplomacy and Development in a Global Environment.” Mifsud’s visit was sponsored by AU’s Program on International Organizations, Law and Diplomacy, in collaboration with the Organization of American States.

For the past two years, Mifsud has been director of LAD, which is affiliated with Scotland’s University of Stirling. LAD offers specialized courses in diplomacy, security studies, business and international trade.

“Diplomacy has to engage normal people,” Mifsud said. “For many years, the kind of training we’ve had for diplomats was to help them engage with their counterparts, the just-in-case kind. But we need just-in-time skills, too. That means extremely good technology, a critical mind, being geopolitically attuned and having the ability to think outside the box, to be able to take decisions you might have to justify. Some diplomats do not take decisions.”

All courses are taught in English, with advanced training in the five other official working languages of the United Nations: Arabic, Chinese, French, Russian and Spanish.

“I wouldn’t send an ambassador to represent my country if he or she doesn’t speak the language of the host country,” said Mifsud. “In Brussels, all the ambassadors I know speak either English or French, plus a third language.”

LAD has 36 faculty members, many of them former diplomats. The school accepts 150 students each academic year — in September and January — and its master’s programs can be completed full time in one year or part time in two years. Classes are held mainly in the evenings and weekends, with online courses also available so that students can complete their studies overseas, if required. LAD also offers a three-year doctor of diplomacy degree, the first of its kind in the world.

But not all learning takes place in the classroom. LAD arranges visits to the Houses of Parliament, the Commonwealth Secretariat and business organizations in London. Study tours also take students to The Hague, the European Parliament, NATO, EU headquarters and the United Nations.

“LAD is a foundation, and funding comes from tuition,” Mifsud said. “We do not accept any corporate funds. We don’t even accept national grants.”

“We train most of the people who are going to become diplomats,” said Mifsud, noting that the London-based ambassadors of Angola and Yemen — Miguel Gaspar Fernandes Neto and Abdulla Ali Al-Radhi, respectively — are currently students at LAD.

In 2012, LAD received the Diplomat Magazine’s “Diplomat of the Year” award for distinguished contributions to diplomacy in London.

In previous centuries, diplomats needed to be well versed in poetry, music and philosophy. Today, they need to be fluent in economic relations and public diplomacy. Diplomats still primarily serve as government liaisons, but their roles have expanded and they’re expected to do more, with less.

“These days, the role of ambassadors has changed considerably,” Mifsud said. “They use Twitter and social media. They’ve become much closer to the political and business class. But still, many embassies are given £1,000 of investment and their government expects £100,000 in return. So we try to give students language skills and intercultural dialogue skills, as well as the possibility of expanding their critical thinking, besides the normal foreign policy courses.”

He added: “Many ambassadors spend their time doing economic diplomacy, meeting businessmen. But branding is also extremely important. Ambassadors must be able to project a good image for their country.”

Among other things, Mifsud spent five years in Slovenia as president of the Euro-Mediterranean University. He’s now helping train Albanian diplomats in their efforts to gain EU membership for the once-communist country. He’s also organizing an upcoming symposium on the threat of Islamic extremism in Europe — specifically on jihadists returning from the religious and ethnic battles now being waged in Iraq and Syria.

Asked who his role models are, Mifsud replied: former Secretary of State Henry Kissinger, whom he called “a fantastic diplomat,” and Martti Ahtisaari, a former president of Finland who won the 2008 Nobel Peace Prize for his work in resolving conflicts around the world, from Namibia to Kosovo to Indonesia.

“We’re not working anymore in the unipolar or multipolar world. Now we’re in the heteropolar world. What is OK today might not be OK tomorrow. Even alliances are changing quickly, because civil society and non-state actors are extremely important,” Mifsud said. “I believe the pathway to peace is through diplomacy.”