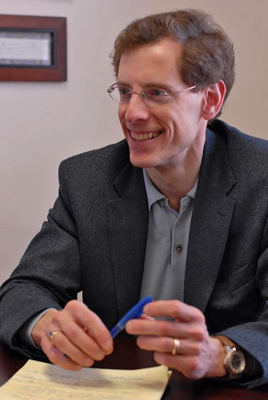 Mark P. Lagon, a former State Department official and Georgetown University professor with a long and distinguished record in the battle against human trafficking, starts a new job as president of Freedom House this month.

Lagon’s leadership of the well-known democracy organization comes at a pivotal time in the history of human rights — and in the history of Freedom House. Founded in 1941 with the support of first lady Eleanor Roosevelt, Freedom House has a legacy of defending democracy, press liberties and basic human dignity around the globe. The Washington-based, independent watchdog group — the first of its kind in the United States — now finds itself aiming to harness and streamline several separate but related missions.

Lagon has served as chair of global politics and security at Georgetown’s Master of Science in Foreign Service Program for the past four years and is a former U.S. ambassador at-large and deputy assistant secretary at the State Department, where he headed the Office to Monitor and Combat Trafficking in Persons. He was also executive director and CEO of the leading anti-human trafficking nonprofit, Polaris Project, and he is the author of numerous articles on international affairs and co-editor of the recently released book “Human Dignity and the Future of Global Institutions.” At Freedom House, Lagon will succeed David J. Kramer, who has served as president since 2010.

During a late-afternoon interview in his small Georgetown office decorated with classic blues music memorabilia, Lagon discussed his new job as president of Freedom House, as well as the challenges of identifying and combating human trafficking. He pointed out that the world has made significant strides toward liberty and basic human rights in the decades since the birth of Freedom House and the end of World War II. But trouble spots certainly remain.

Russia, which established a fragile democracy after the demise of the Soviet Union, has been trending toward authoritarianism at home and is taking an increasingly aggressive posture toward Eastern Europe. China’s economy is still sizzling but the Asian powerhouse’s crackdown on dissent and free speech is among the most severe in the world. Meanwhile, seeds of democracy planted during the Middle East’s Arab Spring four years ago barely sprouted in the region and in many places withered, leaving behind violence and chaos.

In other words, there is still plenty of work for Freedom House to do. The organization’s website contends that nearly 2 billion people still live under “oppressive rule.” Lagon said that under his leadership, Freedom House will continue to advocate for greater political and civil liberties, support frontline activists in the fight for human rights and press for democratic change.

He said Freedom House’s most recent nation-by-nation scorecards on press freedoms and human rights — prized by governments in countries that score well and condemned by those that do not — indicate that liberty is waning around the world. “Freedom in the World,” Freedom House’s flagship publication, is the standard-setting comparative assessment of global political rights and civil liberties. Published annually since 1972, the ratings and reports cover 195 countries and 14 disputed territories and are used by policymakers, the media, international corporations, civic activists and human rights defenders to monitor trends in democracy and freedom worldwide.

“Freedom House reports suggest there is an ebb away from freedom; that things aren’t going in the right direction,” Lagon said, noting that historically, freedom and democracy have moved in waves, sometimes forward and sometimes backward, but that since World War II there has been more progress than regression.

“The problem that we are seeing in our work now is that the bad guys are conferring,” Lagon said. “Autocratic governments are sharing with each other the methods to squeeze civil society and turn social media against dissenters. They are using high-technology methods of surveillance and democratic activists feel squeezed.

“Right now we have the new space race — the space for civil society is being squeezed by dictatorships that have taken the playbook of civil society and social media and reversed engineered it,” he added. “Egypt is an obvious place; Russia, Venezuela, Zimbabwe … but for every one of these disappointing cases there is a Botswana or an Indonesia. For all of its problems — and this is an immense Muslim-majority state — Indonesia is slowly but surely institutionalizing a strong democracy.”

He added: “Freedom House is also there to document the cases of successes.”

The son of Polish immigrants who grew up under the shadow of the Nazis and then the Soviets, Lagon said he is “wired to think about totalitarianism.”

“First the Nazis and then the communists had Poland under their thumb, and in my early career as a political scientist I was focused on dictatorships and how the United States had a special opportunity to help those who were trying to overthrow them,” said Lagon, who previously served on the senior staff of the Senate Foreign Relations Committee and on Secretary of State Colin Powell’s Policy Planning Staff, focusing on issues such as the United Nations and human rights.

Lagon said he believes democracy is the bedrock foundation of human rights.

“I know in some people’s opinion that is out of fashion,” he said. “But I think democracy — and I by that, I mean much more than elections; I mean pluralism and no group being written off as not having rights or being subhuman — that whole package, that infrastructure of democracy, is the best insurance policy for human rights.

“It’s very much at the center of U.S. foreign policy and it should be,” Lagon added.

While the new Freedom House chief supports the notion of helping other countries nurture the seeds of democracy, he is wary of the “democracy building” or “democracy promotion” branding that happened under the presidency of George W. Bush. 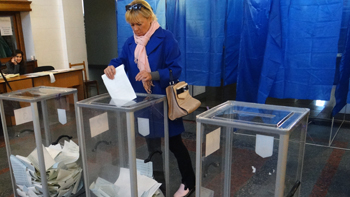 A voter casts her ballot at a polling station in Kiev during Ukraine’s early parliamentary elections on Oct. 26, 2014. Mark P. Lagon, the incoming president of Freedom House, says he believes that democracy is the bedrock of human rights.

“Democracy promotion has become associated with the Iraq intervention,” he lamented. “I think it’s essential for the United States to choose the middle option…. Sometimes we’re going to need to assist armed opposition or even use military force, but there is a moral duty — and even more of an interest for the United States — among those who wish to fight nonviolently with civil resistance to open their countries and try to get their governments to reform.”

Lagon said members of Congress and budget hawks speak frequently of fiscal restraints on the United States, but he insists money spent on stabilizing shaky governmental foundations around the world is money well spent.

“It is a relative bargain to assist civil society groups and other countries in Africa, South Asia or Latin America in their capacity to call for basic liberties and build more democratic countries,” he said. “It’s much more than U.S. values. It’s also in our interest that these countries be more stable and prosperous over time.”

Lagon said perhaps his biggest challenge as he takes over the presidential role at Freedom House this month is integrating its multiple missions.

“The interesting thing about Freedom House is it does three things,” he explained. “It does state-of-the-art research-making assessments of other countries and their level of political liberties. It does global advocacy, and it does programmatic work on the ground, assisting human rights defenders and civil society groups who fight for themselves.

Lagon said that as a former college professor, he looks forward to contributing to Freedom House’s rigorous program of grading nations on their commitments to liberty and human rights.

“I seem to be comfortable with grading,” he said with a smile. “These grades cause indigestion to the governments that get bad marks. They cause indigestion to pinstriped diplomats who want to focus on energy access and trade issues and counterterrorism and other interests, but those reports — credible reports that give grades to other countries — focus the mind of those countries. They care. Some will resist doing anything but others will work to change.”

One of the areas in which Freedom House casts its watchful eye is human trafficking, or modern-day slavery as many people have dubbed it. It’s a subject Lagon knows extremely well having specialized in it at the State Department and then as executive director of Polaris, a Washington-based activism and information group devoted to the issue. Lagon said human trafficking in all its forms — whether its child, adult, sex or labor — has become a more visible issue in the eyes of the general public. The State Department estimates there are some 20 million victims of human trafficking each year, many of them forced into labor.

“I think we’re moving from an area of general wariness to one of greater tangible understanding that human trafficking is more than sex trafficking,” Lagon said. “A lot of it has to do with exploitation for labor. Perhaps the most vulnerable victims are children but the majority is adults. And human trafficking does not require people crossing borders. We’re learning that migrants can be victims, as well as those who are undocumented.”

Lagon also had a stern message for foreign diplomats working in the United States: Watch how you treat your servants at the embassies and ambassador residences; a few high-profile cases of diplomats abusing or not paying their domestic help have made headlines over the years (also see “Oppressed Nannies: State Department Orders Embassies to Clean Up Their Act” in the February 2010 issue of The Washington Diplomat).

“They need to understand the United States does not just have episodic interest in this issue,” he said. “It should be striking to countries that the U.S. spends all this time on issues that involve maids and migrant workers and prostituted women … because the U.S. is concerned when somebody is treated as subhuman.

“It is not going to go away,” he added. “There is also a very particular way that embassies need to be aware of the problem, which is one form of human trafficking. That is diplomats with domestic servants from third countries who so mistreat those guest workers that it counts as human trafficking.

“The U.S. takes seriously when the officials of other governments are complicit in human trafficking, and the government is working to create a system of tracking those domestic servants so that diplomatic immunity does not become diplomatic impunity,” Lagon said.

He also encouraged people in general to keep their collective chins up about the state of democracy and human rights in places like Russia and the Middle East.

“We need to try and help civil society actors try to help themselves,” he said. “We shouldn’t be depressed by the disinformation put out by [Russian President Vladimir] Putin or the stalling of the Arab Spring,” he said. “There is a great opportunity for the United States and international associations like Freedom House to help those who want to help themselves.”