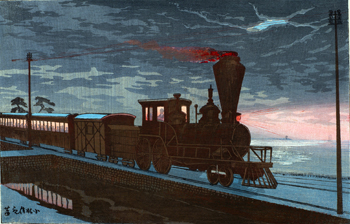 Japanese woodblock artist Kobayashi Kiyochika was a master at playing with light, as seen in prints such as “View of Takanawa Ushimachi under a Shrouded Moon.”

Through a series of woodblock prints, self-trained artist Kobayashi Kiyochika essentially recorded the birth of bustling Tokyo, or the “Eastern Capital.” His work explores the national experiment of modernization that engulfed the city previously known as Edo (until Sept. 3, 1868, when the Tokugawa Shogun resigned).

A fan of Western art, Kiyochika was intrigued by the effects of modernity on traditional settings. The son of a government official, Kiyochika was a minor retainer (samurai) of the recently deposed shogun who followed his master into exile. In 1874, he returned to Tokyo after an eight-year absence only to a find a rapidly changing city filled with locomotives, steamships, Western-style brick structures, telegraph lines and other hallmarks of modernity.

In “Master of the Night,” Kiyochika explores the results of Tokyo’s transformation through themes such as isolation, detachment and anonymity in dozens of woodblock prints. For example, “Sumida River by Night,” one of the main prints featured on the Sackler’s website, depicts a man in a Western-style hat and a woman wearing a Japanese kimono (his geisha) shrouded in shadow as they look out at a dark city embedded with intermittent lights that shimmer across a body of water.

Kiyochika, who often used the cover of night to blanket his prints in quiet solitude, was particularly adept at manipulating light. He blended manmade sources such as gaslights and fireworks with the natural hues from moonlight, dusk and dawn — a reflection of his ability to fuse the past with the present. 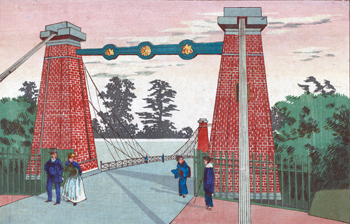 Yet his prints don’t enthusiastically applaud all the changes sweeping Tokyo; rather, they convey a certain sadness at the loss of a life he once knew.

“Kiyochika upends the celebratory role of the cityscape in Japanese art and instead creates a nagging sense of unease,” James Ulak, exhibition curator and senior curator of Japanese art at the Freer and Sackler Gallery, said in a press release. “His view is a stark one, of men and women on the verge of a world with all the old props kicked away. There are no heavens or hells; no intercessory gods or troublesome demons. Some viewers say they can feel the silence in his prints.”

To capture this complex, uneasy coexistence of old and new, Kiyochika used subdued colors and traditional woodblock-printing techniques but incorporated copperplate engraving and oil painting for a final result that resembles Western photographs. His prints show Japanese surroundings captured mostly in twilight and nighttime, using the light to silhouette his figures and spotlight the distinct elements of modernity that punctuate his landscapes. 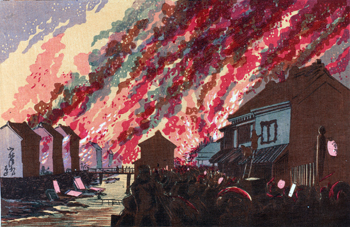 While Kiyochika’s original vision was to create 100 woodblock prints encapsulating the changes taking place in his city, he stopped at 93 when a major fire broke out in 1881. The flames engulfed Tokyo and reached the base of Ryogoku Bridge. Apparently, the artist left his home with his sketchbook in his pocket and sketched the fire throughout the night, returning only in the morning to find his home destroyed.

Kiyochika continued creating woodblock prints of other subject matter, but his Tokyo series faded into relative obscurity after he abandoned the project in 1881. Interest in his work was revived in the early 20th century, and the Sackler exhibit features about half of Kiyochika’s 93 Tokyo prints. They are part of the gallery’s Robert O. Muller Collection, which has among its 4,000 Japanese woodblock prints the most comprehensive survey of Kiyochika’s body of work, including the largest collection of his cityscapes.

The nocturnal themes in the Kiyochika display also surface in a related exhibition, “An American in London: Whistler and the Thames,” showcasing James McNeill Whistler’s images of London’s iconic waterways and its dramatically changing urban environment.

Kiyochika: Master of the Night