Anthropomorphic figurines dating from 600 A.D. and 900 A.D., discovered on the
man-made island of Jaina off the Yucatan Peninsula, offer insights into Mayan religious themes, cosmology and elements of society.

When conversations turn to the ancient Mayans of Mexico these days, they often center on the alleged demise of civilization when the Mayan calendar runs out in December 2012.

Thankfully, the Mexican Cultural Institute in Washington has given us something a bit more substantial — and certainly less stressful — to ponder than Mayan doomsday scenarios. “Hina/Jaina: On the Threshold of the Mayan Underworld (600-900 AD)” showcases a rich array of Mayan figurines excavated from burial sites on the man-made island of Jaina, a vital ritual and religious site off the northern coast of the Yucatan Peninsula.

The exhibition features more than 50 small-scale “Jaina style” figurines that represent Mayan religious themes, cosmology and elements of society. Many of the figurines straddle a fine line between whimsical and scary. The miniature sculptures depict wild hairstyles, headdresses and clothing, exotic animals, fantastical beings, musical instruments, as well as iconographic elements that identify some as personified deities.

The most immediately striking impression of the figurines, dated between 600 A.D. and 900 A.D., is how well preserved they are. They also give us a glimpse at the dress or “style” of the Mayan population.

Some of these figurines were made in molds and mass-produced. Others were crafted entirely by hand, carefully modeled to reveal animated gestures and expressions. The figurines, according to wall text in the institute’s galleries, represent members of elite society, attendants at court, and those from more modest walks of life.

A menagerie of animal figurines enclosed in a glass case is especially entertaining and features birds, rabbits, dogs, turtles, serpents and monkeys. Although the fundamental integrity of the figurines is well preserved, a spotted howler monkey shows his age because the black paint, or a coloring of some sort, is chipped away, giving the primate a mottled effect.

Vivid photographs interspersed with the figurines give the viewer a consistent sense of place, such as one of a freshwater sinkhole in the ocean at Jaina, one of nine such sinkholes found in the island’s immediate surroundings. In the Mayan world, these sinkholes represented a gateway to the underworld.

Jaina itself is also a marvel to behold. The place represents a feat of engineering on the part of pre-Hispanic Mayan civilizations, which transformed the physical landscape to create a cultural and sacred space.

Thanks to this engaging exhibit, viewers can take in some of the Mayan mysticism without leaving Washington — or fretting about the end of the world.

If worrying about mankind’s final days has you thinking about your last meal, the Mexican Cultural Institute may also be able to satisfy that craving. In addition to ancient art, it’s home to some of the most authentic Mexican food in town. 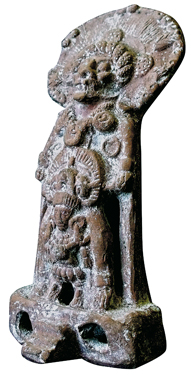 The institute’s five-year-old “Mexican Table” program not only serves up delicious Mexican fare, it also teaches guests how to properly prepare it. Under the expert and charming tutelage of Patricia Jinich — host of “Pati’s Mexican Table” on PBS — about 125 guests learn how to make such Mexican delicacies as creamy poblano soup, chicken mole dish or white rice with plantains.

At an event in May in honor of Cinco de Mayo, Jinich focused on the Puebla state in Mexico, where a small Mexican militia prevailed in battle against the more powerful French army in 1862. Puebla cuisine, which marries traditional Mexican and Spanish styles, also is among the most complex and celebrated cooking styles in all of Mexico.

Jinich — speaking with a wireless headset microphone at the front of the institute’s beautifully tiled and airy banquet room — walks guests through the history of the food she’s preparing and provides helpful and memorable tips. For example, Jinich informs us that adding a whole uncut jalapeno pepper or two to a boiling pot of rice or chicken will impart a modest bit of flavor without making the contents too spicy to enjoy. And the jalapeno will absorb all the other flavorful elements in the pot, making for a piquant treat in and of itself.

Part of the pleasure of watching Jinich cook is the aromas that permeate the room. Sit as close to the front as possible if you really want to stimulate your olfactory senses. Attentive waiters are on hand to clear dishes and refill wine and replace the Mexican beers served as part of the meal.

At the end, Jinich sends everyone home with recipes, as well as a gift bag that — in our case — included Mexican chocolate for making mole, as well as two kinds of dried peppers and a beautiful piece of Mexican tile for resting a hot coffee cup or small pot.