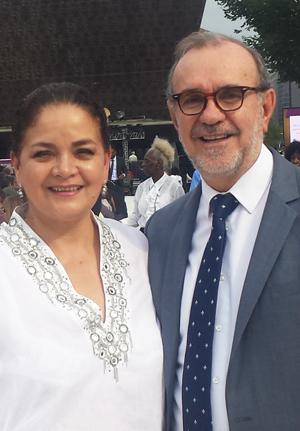 Instead of a wall, “Mexico prefers to build bridges,” said Maria Elena Vazquez, wife of Mexican Ambassador Carlos Manuel Sada Solana. “Walls exist already where they need to exist. They are very impressive. They have been built over the years. I don’t remember it being an issue before.”

But it became a huge issue after Donald Trump pledged to build a controversial wall spanning the U.S.- Mexico border in a bid to curb illegal immigration — all while making Mexico pay for it. The Republican president has since said that the U.S. will pay for construction of the wall but that Mexico will reimburse it (much to the chagrin of many Mexicans).

Trump’s potentially contentious relations with America’s southern neighbor has made the job of Mexico’s diplomats all the more difficult. Perhaps that’s why last month, the Mexican government announced yet another diplomatic shuffle by replacing Sada with Gerónimo Gutiérrez, who will become the country’s third ambassador to the U.S. in less than a year.

A member of the opposition center-right National Action Party, Gutiérrez is the current head of the North American Development Bank and has extensive experience working on border issues and the NAFTA trade pact.

In the wake of their unexpected departure following Trump’s inauguration, Maria Elena Vazquez was busy finding a house for them in Mexico City. “We have a home in Oaxaca but that is four hours away by car to Mexico City,” the mother of two told us. “We are coming home little by little. Our one son is already living and working there since last July and our other son is coming back.”

While the shakeup was a surprise, Vazquez and her husband plan to continue their efforts to convince Americans that Mexico is not their enemy, but their friend. Sada has emphasized the benefits of NAFTA — which Trump threatened to tear up — and cross-border trade, while adamantly rejecting the notion that Mexico would ever pay for erecting a massive barrier along the nearly 2,000-mile border. During a trip to Arizona late last year, the ambassador pointed out that while Mexico is open to “modernizing” NAFTA, he credited the sweeping trade agreement with creating 5 million to 6 million jobs in the U.S. and boosting two-way trade to over $530 billion in 2015.

His wife, an engineer by training, is also trying to spread the word about the importance of relations with Mexico, which is America’s third-largest trading partner.

Speaking to us before the announcement of their departure, Vazquez said that a good example of this interdependence is the busy border crossing between San Diego and Tijuana. “You park your car and take the stairs, go across a bridge and go through customs at the gate,” Vazquez said. “There are great projects on the border to control the movement of people.”

Tijuana shares a 15-mile border with the U.S. on the Gold Coast of Baja, Calif., at San Diego. According to the Mexican Embassy, there are 300,000 vehicle border crossings every day and 50 million crossings every year between the people of the two countries. “There are 58 important crossing [stations],” Vazquez said. Around 70 percent of bilateral trade crosses the border by land, along with 1 million people who cross it legally on a daily basis.

But it’s the illegal crossings that prompted many Americans to throw their support behind Trump, who has said he would crack down on the estimated 11 million undocumented immigrants in the U.S. — about half of whom are Mexican.

But Vazquez also points out that millions of Mexicans have made America their home — legally — and contributed to the economy.

“Some of the best people from Mexico are the ones who have the drive and guts to leave everything and everyone behind — their family, comfort, husband or wife and children — and come to a strange land,” she said. “For many years, they do whatever job they can get and are law-abiding…. After they get their citizenship, they pay taxes. It hurts me that so many Mexicans are so successful but Americans don’t know that reality.”

Latinos, in fact, opened 86 percent of all new businesses created in the U.S. between 2007 and 2012, according to the embassy. Mexican companies in America include Bimbo Bakeries USA; Grupo Lala, the second-largest producer of dairy products in the U.S.; América Móvil, the largest prepaid wireless service in the U.S; CEMEX, the second-largest cement maker in the U.S.; and Cinépolis, the fourth-largest chain of movie theaters in the world. Plus, if you’ve had a knee or hip replacement, you likely received a medical device from Mexico — “the medical device capital of North America,” Vazquez noted.

Beyond business, Vazquez also touted Mexico’s famed cuisine and culture, as well as the millions of Americans who visit the country annually. She is especially proud of the Mexican Cultural Institute on 16th Street, NW. “It’s a beautiful house, on all four floors. It is great for conferences and showing the sunny side of Mexico and the Mexicans that people don’t know.”

Since its establishment in 1990, the Beaux Arts mansion has hosted hundreds of concerts, exhibitions, discussions, tastings and other events. One of the most outstanding features of the building is the dramatic mural along its graceful staircase created by Mexican painter Roberto Cueva del Río. 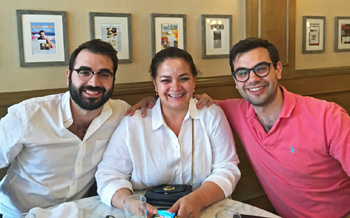 Maria Elena Vazquez poses with her two sons, Manuel, who is studying international relations at the University of Chicago, and Andres, who works in Mexico City at Anheuser-Busch.

Another famous import with which many Americans are familiar is tequila. Vazquez proudly showed off the lighted shelves in the residence foyer, which were lined with various bottles of tequila. “We have 1,300 different brands of tequila being produced in Mexico,” she said, noting that the residence also showcases mezcal, an agave plant-based spirit from her home state of Oaxaca.

“Oaxaca is the most beautiful state with its indigenous cultures. There are still 16 different groups with their own customs who speak 16 different languages. We have good musicians and great painters. Ninety percent of the paintings we brought with us we borrowed from Oaxaca,” said Vazquez, a graduate of the Universidad de las Américas in Puebla, Mexico, who worked in Oaxaca for several years before she got married.

“I could have lived my whole life in Oaxaca,” she told us. “People would go away to school and come back to Oaxaca. It’s a small place. The families all know each other. For the past 60 years, my grandmother and her friends have been getting together every Tuesday. My mother and my mother-in-law go too. These women talked and organized parties for the holidays. After all those years, though, they have never been successful matchmakers,” she quipped.

So how did she and the ambassador meet?

“Since Oaxaca is so small, we all go to the same places. I had seen Carlos all my life, but we were never really introduced. His sister was my age so we went to the same birthday parties together. After college, I had a job offer in Mexico City. The first weekend I came home, I went to the tennis club. Everyone was talking about going to a concert or dance that night. I didn’t have anything else to do so I went with everyone to dinner. I saw Carlos. One of my friends said, ‘This is the third time he’s seen you. He’s after you!’ I said, ‘Of course not. He’s just a friend,’” she recalled.

But the ambassador clearly had other intentions, and eventually the two were married in a large ceremony that included 750 guests.

Sada, who studied industrial engineering, began his government service in 1980 and has served various postings in his home state of Oaxaca, where he was responsible for everything from urban development and fisheries to education and tourism.

“The first time we left Mexico as a family to go to Canada, the boys were 2 years and 10 months,” Vazquez recalled of her husband’s first overseas posting as consul general in Toronto. “Now they are 29 and 28. Andres is in Mexico City after getting his MBA from Columbia University and his undergraduate from the University of Texas in Austin. He is working at Anheuser-Busch in acquisitions. Manuel, one year younger, is studying international relations at the University of Chicago. One day maybe he will go into the diplomatic corps. He likes the subject but he doesn’t like moving around,” said Vazquez, noting that she also dislikes moving.

Vazquez, whose accent is barely discernable, also had prior experience living in the United States. “When I was 17, my parents sent me to the U.S. to learn English. I was in an exchange program at Wissahickon High School, a historic area northwest of Philadelphia. Wherever I was, I always took English classes, thank God,” she said.

“It was wonderful. I finished high school there. I was a good student, a responsible person. I was so happy to choose the classes I wanted: French, German, English lit, gym and history.”

But Vazquez was dismayed that many Americans were unfamiliar with Mexico and harbored certain stereotypes of her homeland. “That’s improved a lot. Now our countries are good partners.”