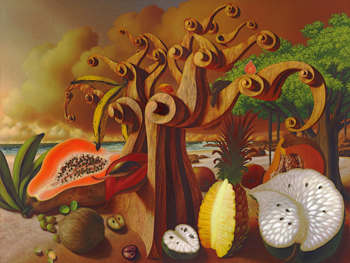 Food has always been more than just fuel, but that’s easy to forget in our supersized society where we stuff ourselves into early graves, gorging on Big Macs, chili cheese fries and tanker-size soft drinks. Our greasy fingers keep reaching for some unholy abomination that has been deep-fried, flash-frozen, individually packaged and artificially flavored beyond recognition.

Entire civilizations have been born — or destroyed — by the abundance or scarcity of food. Food has started wars and ended them, with soldiers starving to death in godforsaken wastelands across the scorched earth of their enemies. Food also serves as sin or sacrament, whether in the form of bread and wine representing Christ’s body and blood, or the enduring fasts of Ramadan or the tangled web of kosher rules. The American Visionary Art Museum in Baltimore, Md., tackles these themes with humor and candor in YUMMM! The History, Fantasy, and Future of Food, on view until Sept. 3.

Since its debut in 1995, the American Visionary Art Museum has prided itself on its anti-museum approach, showcasing a wide array of unconventional works by self-taught artists of varying backgrounds. The 1.1-acre campus in the historic Federal Hill neighborhood — built on a former paint company and whiskey warehouse — is home to a permanent collection of over 4,000 pieces of “intuitive” art.

“YUMMM!” embodies the museum’s focus on outsider art with a visual feast of paintings, sculptures, embroideries, installations and films. Over 30 artists join forces with scientists, farmers, nutritionists, environmental activists, psychologists, poets and humorists to explore our complex relationship with food.

In the first gallery, Wendy Brackman’s 10-foot spinning sculpture titled “Brackman’s Botanical Bonanza!” immediately catches your eye with its hypnotic whirl. A cornucopia of food created from hand-painted and folded paper plates revolve in opposite directions in a kaleidoscopic rainbow of colors. Bright green heads of lettuce spin past bright yellow ears of corn as a swarm of bumblebees land for a visit. Brackman artfully transforms a lowly material associated with picnics or pre-school macaroni projects into a whimsical sculpture that celebrates the bounty of food with both humor and gratitude.

Much smaller in scale, Gil Batle’s intricately carved ostrich eggs amaze with their minute and brutal details of prison life that he witnessed during more than 20 years in California prisons, which were triggered by a trail of forgery and fraud to fuel his drug addiction. Batle, who inked tattoos and drew portraits of other prisoners to survive life behind bars, later moved back to his native Philippines. When his brother gave him an ostrich shell, he began using a dental drill to carve chilling prison scenes on the surprisingly sturdy shells that resemble miniature marble sculptures. In “51/50 Dreams,” a sleeping inmate holds his head on a cot framed by prison bars. Alternating rows of negative space cut through the egg shell and highlight a line of grim-faced prisoners, ominous hands wielding shanks and a circle of snakes swallowing each other by the tail. The sculptures really need to be displayed in the round to truly appreciate them, but they have been shoved against a wall in a crowded corner.

Bread has been called the staff of life, but it’s also inspiration for the Community Bread Art Wall Project, which was created by artist Jerry Beck with help from more than 200 youth from a Boys and Girls Club and community college in Massachusetts. Baking sheets with charred bread are transformed with pithy phrases or groan-worthy puns (“Money Is Not The Only Dough”). The most impressive work is a mandala resembling a doughnut with a bright red hole of negative space showing the painted wall behind it. Created from bagels, pretzels and goldfish crackers, the piece conjures a spiritual connection between the simplicity of bread and the eternal spinning wheel of life.

Rocker-artist Wayne Coyne, front-man of the Flaming Lips, has created a life-size gummy-bear statue of himself that looks tastier than burnt bread, but it was encased in Plexiglass so I couldn’t lick it, although pint-size versions were being hawked in the gift shop. Coyne’s nude statue, with spiky serpentine hair and the weird missing genitalia of a Ken doll, stands at attention before a psychedelic crowd cheering at a Flaming Lips concert.

The exhibition really shines with its humor and whimsy. While there are some more challenging works, they are organized in an arbitrary, scattershot manner through the exhibition. A few pieces delve into the links between food and starvation and the depredations of war. There are some conventional arguments for vegetarianism and against factory farming that will gratify vegetarians, while carnivores will shrug or feel slightly guilty about that bacon-and-egg bagel they ate for breakfast. One striking exception is a disturbing video of a woman silently knitting a long strand of raw beef into a tray of hamburgers. The coiling rope of meat is both repulsive and fascinating. Healthy eating gets a plug in a video of “big, bad Sugarman,” a double-chinned balding man wearing a pig mask who rails against all-you-can-eat buffets and popcorn with “that fake butter stuff.”

The Women of York take a deeper dive with “Shared Dining,” a revolving table featuring placemats created by 10 female inmates at the York Correctional Institution in Connecticut. They created placemats that honored women who touched their lives. The rotating triangular table was inspired by Judy Chicago’s “The Dinner Party,” a seminal 1970s feminist installation featuring place settings for 39 women who made history. The female inmates use humbler materials available to them in prison, including a plate for Shakespeare’s Juliet adorned with a toy plastic dagger and a bottle of poison. Magazine clippings and the word “EDUCATION” spelled in Scrabble tiles honor Malala Yousafzai, the Pakistani girl who survived the bullets of a Taliban gunman before becoming an impassioned female rights advocate.

Audio recordings of some of the York inmates explain why they chose the women they honored with their place settings. The installation reminded me of my own circuitous steps many years ago through the monumental AIDS quilt as it was unfolded in its silent and tragic testimony around the Washington Monument. “Shared Dining” tackles a different subject on a much smaller scale, but it reveals how we lose too many people to a life behind bars because of our unrelenting demands for retribution rather than rehabilitation.

The exhibition succeeds in presenting a diverse array of artwork that challenges us to think about food as more than just calories, moving beyond the sadness of Happy Meals, the unfortunate existence of “hamdogs” and pizza with cheese injected into the crust because … well, just because. There’s no good answer for that one.

“YUMMM!” The History, Fantasy, and Future of Food